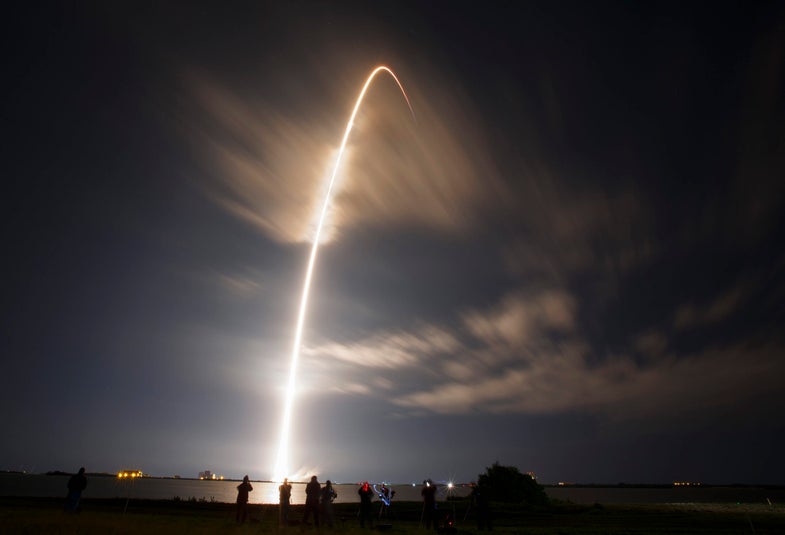 The unmanned Falcon 9 rocket launched by SpaceX, on a cargo resupply service mission to the International Space Station, lifts off from the Cape Canaveral Air Force Station in Cape Canaveral, Florida January 10, 2015. The unmanned Space Exploration Technologies Falcon 9 rocket blasted off from Florida on Saturday carrying a cargo capsule for the International Space Station, then turned around to attempt an unprecedented landing on earth.While the cargo ship flies towards the space station, the rocket was expected to head back to a floating platform in the Atlantic Ocean some 200 miles (322 km) off Jacksonville, Fla., north of the Cape Canaveral Air Force Station launch site. REUTERS/Scott Audette (UNITED STATES - Tags: SCIENCE TECHNOLOGY TRANSPORT TPX IMAGES OF THE DAY SOCIETY) - RTR4KTAM. © Scott Audette / Reuters
SHARE

A colony on Mars. It’s the fantasy of pretty much all space entrepreneurs these days. Bas Lansdorp famously dreams of establishing a permanent human settlement on the red planet by 2025, and NASA is working hard on the Orion capsule and Space Launch System, both of which are meant to take astronauts to Mars in the 2030s.

Now Elon Musk is throwing his hat in the ring, telling Bloomberg News that he also intends to establish a Mars base someday. And he’s going to pay for it by launching satellites. The goal is to set up a Seattle office in the near future, strictly for developing and launching satellites. And in true SpaceX fashion, Musk says they’ll run cheap.

“We’re going to try and do for satellites what we’ve done for rockets,” Musk said at a recent press conference.

“We’re going to try and do for satellites what we’ve done for rockets.”

Musk titillated his Twitter followers in November about a fleet of micro-satellites that SpaceX was working on, and now he is clarifying the company’s plans. The Pentagon is looking to spend $70 billion on satellite launches through 2030, and Musk wants SpaceX to get a chunk of that money. The idea is to use the profits from launching satellites to ultimately fund a future mission to Mars, as well as an eventual colony. Musk has touched on his desire to colonize Mars before, and he says he will reveal SpaceX’s plans for colonization later this year.

But if Musk really wants to make a profit from launching satellites, he’s going to have to make the actual launches cheaper. Fortunately, he’s already in the process of turning that into a reality by figuring out a way to reuse his rockets. Normally, most of a rocket is destroyed or lost after it launches, but SpaceX wants to figure out a way to land rockets, so they don’t have to keep rebuilding them. In a historic first, the company attempted to land the majority of one of its Falcon 9 rockets after launching it to the ISS. While the rocket body hit its intended target, it did so a little too fast, shattering into pieces.

Yet Musk says they know what went wrong with the landing, and are confident about their next attempt. “If we had not run short of hydraulic fluid we would have actually landed,” Musk said. “So for the next flight we’ve got 50 percent more hydraulic fluid margins. We’ve got a real decent chance in about three weeks.”