What Does A Navy Do?

Welcome to ShipShape, a blog that will attempt to demystify the ships and systems that ride on and under the... 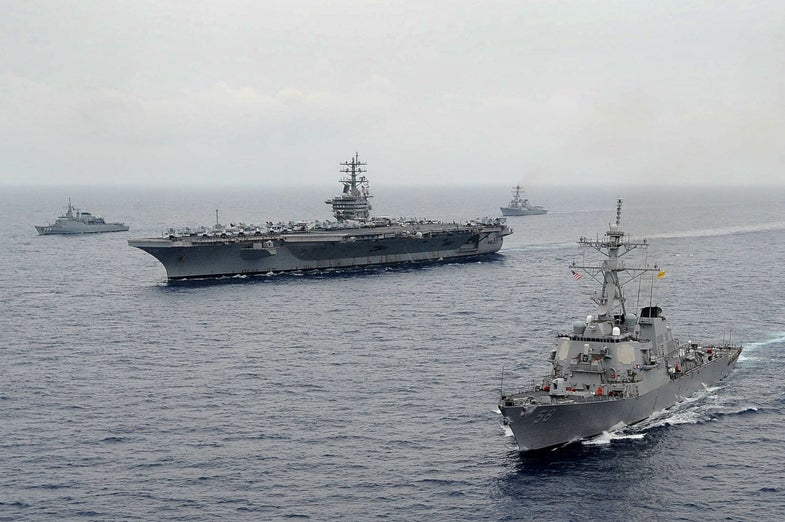 Welcome to ShipShape, a blog that will attempt to demystify the ships and systems that ride on and under the open ocean. As this blog progresses we’ll tackle some of the how’s and why’s of navies and their roles in the world and spend time tackling assumptions of how the ocean works.

Future topics will include: Why put nuclear power in a submarine? What happened to the battleship? How does a ship refuel at sea? What’s the biggest modern threat to a ship? And how does a missile or a torpedo know where it is and where it’s going?

But before getting to specifics in coming posts, let’s take a minute to think about what a navy does.
The U.S. Navy – by far the world’s largest – has a hard time defining what they do themselves. So far the best that Madison Avenue has been able to come up with is the current slogan, “America’s Global Force for Good.”

Like the British Royal Navy before it, the U.S. Navy was tied to commerce more so than any other military force and – according to George Washington – entwined with the very fabric of what America hoped to be.

“It follows then as certain as that night succeeds the day, that without a decisive naval force we can do nothing definitive, and with it, everything honorable and glorious,” Washington wrote to Marquis de Lafayette in 1781.

For America, that intimate connection to the workings of the global economy made it the most internationally visible U.S. military component but at the same time, the most misunderstood.

Armies are easy to understand. They are about ownership of real estate by possession. They break things until the opposition force surrenders and (sometimes) leave. Air forces – especially the U.S. Air Force – serve as a military version of FedEx with just-in-time deliverers of troops, supplies and bombs. They also have the ability to strike targets from great distances and change the scope of a battlefield.

Navies are far more complex in almost every aspect, from their roles in peacetime to how they move across the water to how they communicate with the disparate parts of their organizations. A navy brings a mix of influences that range from the soft power of maritime law enforcement and humanitarian assistance and the hard power of raw military might. Instead of owning dirt, navies operate primarily in international waters. Those waters are free to use for all and projecting influence while maintaining access for commerce is a trickier business than a garrison on a hill.

As the world grows closer knit through the tons of commerce that flows across the water, navies are becoming more important in their roles and influences.

So what’s the conglomeration of ships, submarines and aircraft supposed to do?

They can also strike threats faster and more completely around the world than any other part of the military, think the deluge of Tomahawk Land Attack Missiles that rained down on Libya in 2011 or the threat of similar strikes off of Syria. There’s also much to be said about the aircraft carrier, one the most potent weapons of modern warfare that has the ability to park in international waters and how its mere presence can change the course of a conflict.

That balance between hard and soft power makes a navy’s work tricky. Added to the complexity is establishing ships and chains of supplies and fuel to allow navies to operate as away teams – a term the U.S. Navy leadership is fond of using. With international involvement in the war in Afghanistan coming to a close, national attention is shifting toward the sea and we’ll be here to help figure it out.