FAA Panel Recommends Lifting Ban On Gadget Use During Flights

You might soon be allowed to read your Kindle during takeoff and landing. 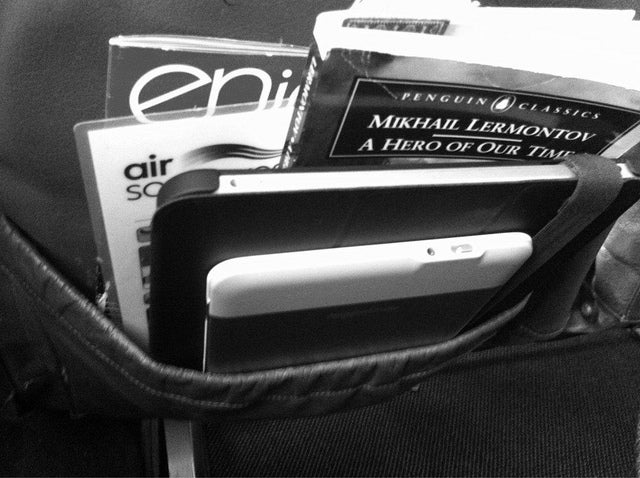 After receiving countless complaints, abuse towards flight attendants who are only doing their jobs, and standup bits, the FAA finally set about determining whether electronic gadgets actually are dangerous during a flight’s takeoff and landing. A 28-person advisory panel just concluded its study and, says the AP, will recommend that the FAA lift or at least loosen its restrictions.

The panel does not recommend the use of cellular networks like 3G and 4G LTE; you won’t be streaming Netflix while taking off, if the panel has its way. (Not that you probably could; the airplane’s speed means that you’ll be switching from tower to tower faster than your phone or tablet can reasonably hope to connect to each one in turn.) Instead, devices in “airplane mode,” meaning devices with all their radios (Wi-Fi, Bluetooth, and cellular) turned off, would be just fine to use. So you can’t stream your favorite TV show, but if you’ve downloaded it and flipped your gadget to airplane mode, watch away.

Gadget manufacturers have been campaigning for years for a change in the FAA’s policy (which currently bans any electronic use when the plane is below 10,000 feet). Amazon, especially, is annoyed, as its Kindle ebook reader suffers a distinct weakness compared with physical books, given that you aren’t currently allowed to use a Kindle during part of your flight. Amazon has previously tested interference on its own by “testing an airplane packed full of Kindles,” as an Amazon representative told the AP.

The advisory panel’s decision is likely to be implemented by the FAA; the FAA not only created the panel but also had a hand in selecting some of the members, so it would be surprising if the agency chose to ignore the panel’s conclusions. The AP says that the decision could be implemented as soon as early 2014.