Brimstone is the new Hellfire.

There are generally three ways to improve an explosive weapon: make the explosion bigger so it’s guaranteed to hit the target; improve its precision so that it doesn’t hit anything but the target; or shape the explosion so that when it goes off, it travels in a specific direction. Over the past 12 years, as the major war effort of both the United States and the United Kingdom has been fighting small groups of insurgents that operate in civilian areas, weapons engineers placed a heavy emphasis on the latter two strategies.

In that vein, MBDA Missile Systems revealed last Friday that MQ-9 Reaper drones successfully fired Brimstone missiles, an evolution of the more familiar Hellfire missile currently fired from Predator and Reaper drones, in several tests this past winter. The goal is to develop a more precise missile that causes less collateral damage.

The Hellfire missile was designed in the 1970s as an armor-piercing weapon for helicopters. It has been in service since 1985. Work on the Brimstone missile began in 1996, and the British Royal Air Force started using it in 2005.

Here’s what makes a nine-year-old missile replacing a 29-year-old missile a big deal: The Brimstone can travel on drones, and, thanks to a “tandem-shaped charge,” its explosion is focused into a straight line and has an accuracy of 1-2 meters, and thus is less likely to cause collateral damage. Shaped charges are used in commercial demolition work to make buildings implode instead of spraying rubble. For drone warfare, this is tremendously important, as even drones with guided weapons systems have killed many civilians over the past decade.

Currently the UK Royal Air Force is considering whether or not to adopt the Brimstone. 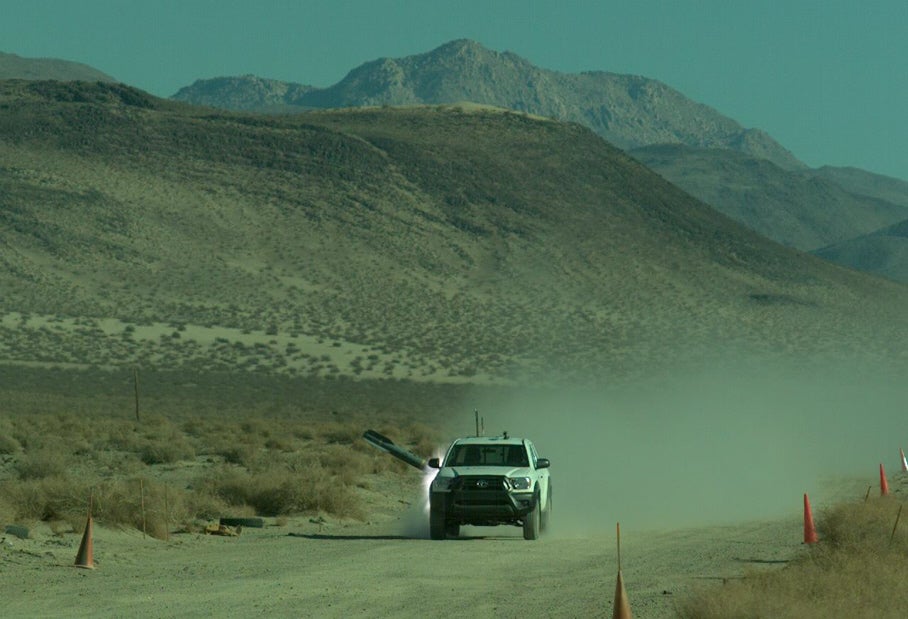 The truck is going 50mph. Not bad.
Kelsey D. Atherton