Why We Haven’t Built A Better Black Box

The technology's here, but financial and ethical constraints keep pointing us in the wrong direction. 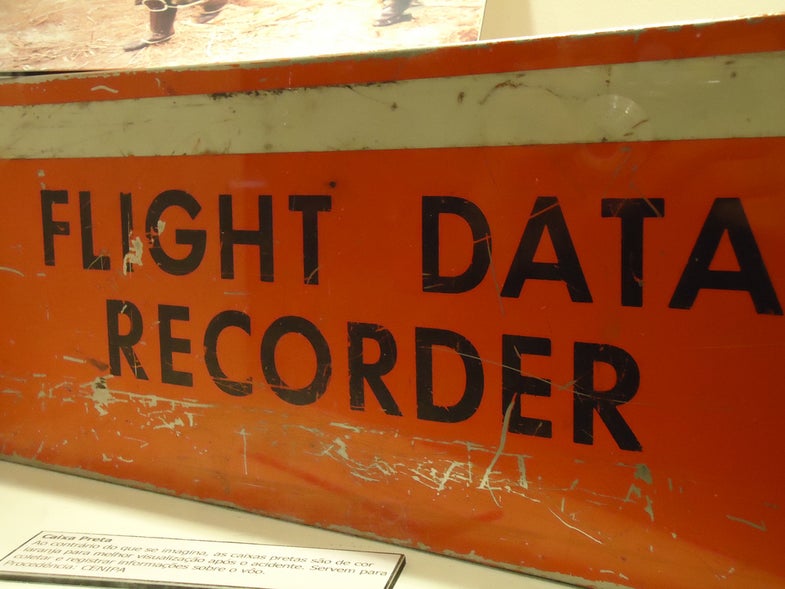 Malaysia Airlines Flight 370 is all but certainly sunk in the Indian Ocean, yet time is running out to unravel its tragic story. The plane’s flight recorder, or “black box” (which isn’t actually black), sends out a detectable sonic ping for about 30 days; if investigators don’t find it in that time, the chances of ever finding it plummet.

We have the ability to take photos on Mars and then download the images to devices in our pockets. When a plane crashes in water, however, we scramble to assemble a national coalition tasked with locating even a general crash site. Surely there’s a better way.

Aside from some flight recording that started as early as World War II, black boxes as we know them today were invented in the late 1950s—and the general idea hasn’t changed much since. Modern airplanes come with both a cockpit voice recorder (CVR) and a flight data recorder (FDR). The CVR records two hours of sound in the cockpit, constantly re-recording over itself. Meanwhile, the FDR measures and records datapoints like flight speed, altitude, time, direction, and as many as 2,000 other parameters. This information is logged on a continuous 25-hour loop inside most boxes, according to Anthony Brickhouse, an associate professor of aerospace and occupational safety at Embry-Riddle Aeronautical University who worked on the infamous TWA Flight 800 crash.

Flight recorders also meet absurd crash standards to ensure they’re not damaged; they’re fire-proofed, water-proofed, and encased in metal shells that can withstand ballistic punishment and the pressure caused by 20,000 feet of seawater overhead. (Despite their popular moniker, black boxes are actually painted bright orange for visibility.) When a box goes down in water, it sends out a sonic “ping” that investigators can detect from miles away. The underwater locator beacon or “pinger,” however, only has enough battery power to last about 30 days—creating a race against time for investigators in the MH370 search. Only a handful of black boxes have ever been lost, yet this is a situation where it could happen again.

It’s tempting, in the age of streaming data, to call this an archaic, obsolete system—after all, there are better ways of recording and accessing flight data—but they face staggering problems in practice. After an Air France crash in 2009, for example, it took investigators two years to recover the black box. French safety officials drew up recommendations afterward to improve the flight recorders, and the FAA followed suit. Those recommendations included features such as adding a mechanism to catapult a black box into the air when it hit water, and tripling the battery life of the underwater locator beacons to 90 days. Air France incorporated such technologies into its airplanes, but U.S. airlines are lagging behind on the new regulations. Financial hurdles are the most notorious reason for an increasingly parsimonious airline industry. “As with everything, you know the money is always going to be an issue,” Brickhouse says.

The other option is to do away with the black box entirely. One deeply explored plan involves replacing it with an always-on record of cockpit sound and flight data that’s sent by satellite to a storage facility. Not only would we never lose another black box—they’d become obsolete—but we could also prevent crashes by remotely detecting problems with an ongoing flight. This isn’t quite the slam dunk it sounds like. If airlines and pilots consented to the plan, they would essentially be wiretapped at work. Then there’s the muddled economics of safety to consider: the plan would be tremendously expensive for airlines to enact. They’d have to retrofit entire fleets, reserve satellite time, and secure adequate data storage facilities, among other costs. They could just point out that the black box system isn’t perfect, but works well enough for almost every crash recovery.

Can we hope for an improved system before the next black box goes missing? It’s hard to say. But the airline industry is inertial—always taxiing, never quite moving as quickly as we’d like.