Black Widow Spiders Would Rather Not Bite You Or Beck

This week, while promoting his new album, “Morning Phase,” the great musician Beck has been doing a bunch of interviews.... 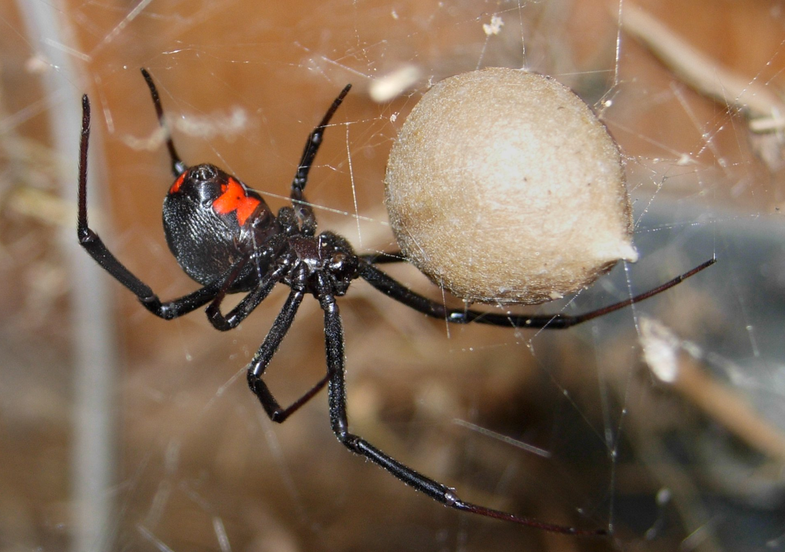 This week, while promoting his new album, “Morning Phase,” the great musician Beck has been doing a bunch of interviews. One line in an NPR story caught my attention: During recording sessions, Beck was bitten by a black widow spider, and wound up in the hospital. “My arm was all swollen up,” he told Steve Inskeep.

It probably hurt an awful lot — but it also meant a lot of discomfort, or at least the perception of a serious threat, on the part of the spider. Black widows (Latrodectus hesperus) are choosy in their use of venom, according to a recent study. They will only bite if they’re poked repeatedly or pinched; otherwise, using up their venom, with its complex proteins and high metabolic production costs, just isn’t worth it. They might play dead, or throw some silk bombs instead.

I’m not saying the bite means Beck provoked a spider! More than likely, he wouldn’t have known the arachnid was there until it made its presence very, painfully, known. Black widows like to hide in dark places, like underneath rocks, inside bunches of grapes, or behind furniture — places where you might not double check if you’re, I don’t know, focused on trying to record a major studio album. Like most spider bites, the confrontation was an unfortunate accident. Unless it lashed out after listening to “Loser” for the 8,000th time.

Regardless, it must have been a real scare! (For the spider.) In a new research paper, David Nelsen, Wayne Kelln, and William Hayes at Loma Linda University in California explain what it takes to sufficiently tick off a black widow so it bites. They captured some female black widows from the San Bernardino hills and stored them in plastic deli cups. They allowed the spiders to build webs and then they poked, prodded and pinched them with a gelatin “finger” to see what they would do. 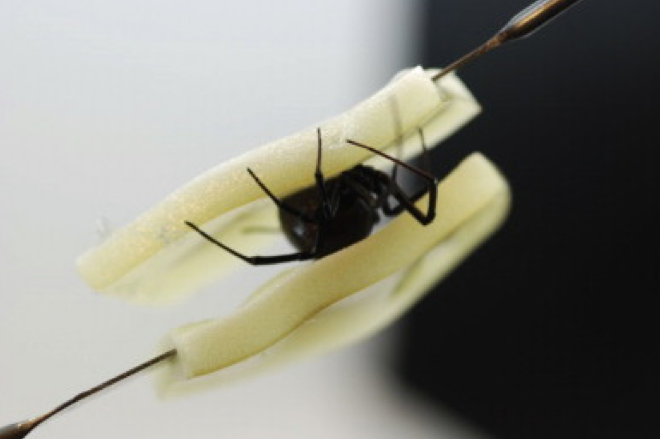 Along Came A Spider

The scientists started out by being annoying, giving each spider one little nudge somewhere on its body. The spiders edged away. Then things escalated to a “medium threat,” representing a more persistent predator, in which they poked each spider every second for one minute. The spiders moved again, retracted their legs, and sometimes flicked silk-bombs in the attackers’ general direction. For the “high threat” response, they coaxed each spider onto a gelatin finger — here, little spider! — and pinched down on it for 10 seconds. That provoked the biggest spider freakout: The critters played dead or bit down on the finger, injecting their venom.

These responses all varied among spiders according to the severity of the threat, with the arachnids using several defensive tactics. But it got interesting when the team looked at the length of time between pinches, the number of bites, and the amounts of venom delivered in each bite. Spiders bit more frequently when their legs were pinched, but they delivered more venom in each bite when their thoraxes or abdomens were squeezed. This makes sense — they’re biting as a last resort, and even when they bite, they don’t use a lot of venom unless it’s absolutely necessary.

“Because these two products, venom and silk, can be considered limited commodities, spiders should be judicious in dispensing them,” the researchers wrote, adding that their results suggest spiders are making active decisions.

Whether there’s a cognitive choice is an open question, but it’s clear that spiders can somehow control the dispensation of their resources. Poor Beck. Perhaps it adds to the melancholy, anyway.

Go here if you want to buy the new, and apparently spider-provoked, album Morning Phase.

Aside: Invertebrates often don’t fall within the purview of animal care committees at research institutions, and that was the case here. But the researchers still took pains to ensure the arachnids’ comfort during and after the experiments. They lived out their lives in peace for the next one to two years — the expected lifespan of a black widow.