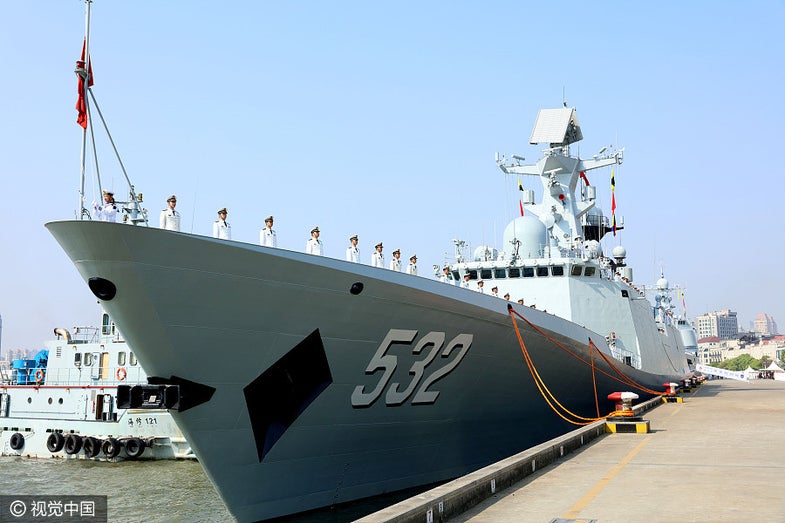 The Type 054A frigate Jingzhou, commissioned in January 2016, is one of China's newest anti-submarine warfare ships. China Daily
SHARE 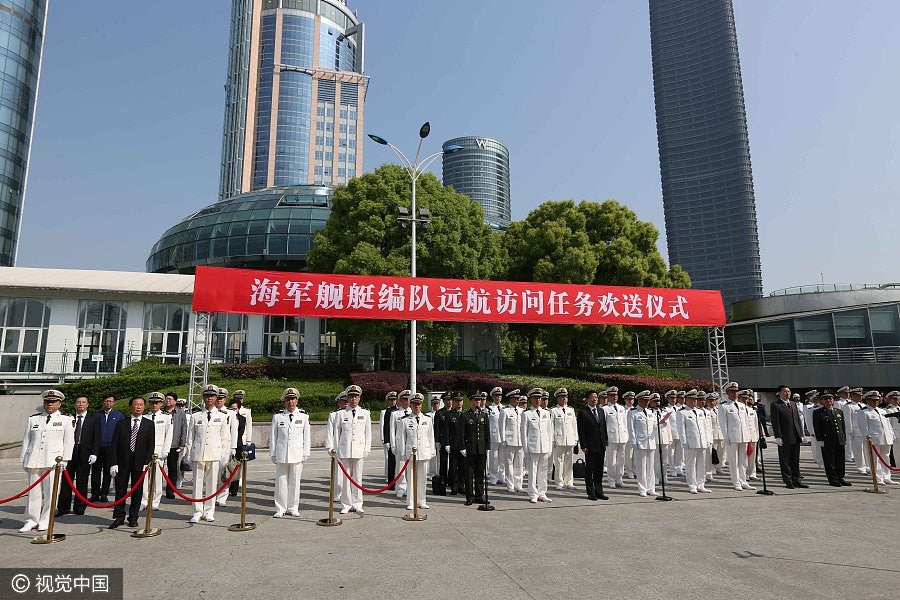 China will be sending a multi-warship task force across the oceans for six months, setting a record for the longest Chinese naval deployment. While the PLAN has not engaged in combat for nearly 30 years since the 1988 South China Sea skirmishes with Vietnam, it has made it a priority to display its naval might and participate in exercises to build relationships with other navies. There’s plenty of historical precedence for global voyages to peacefully display naval power, the most famous being Teddy Roosevelt’s dispatch of the “Great White Fleet,” a 16-battleship armada that made a global tour from 1907 to 1909. 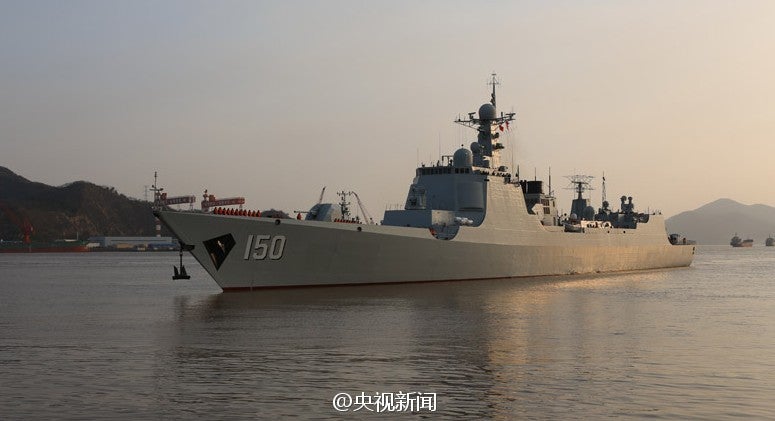 The guided missile destroyer Changchun (number 150) will be the flagship of the task force.

This tour won’t be quite as grandiose as Roosevelt’s. Three ships will be touring 20 countries: the Type 052C destroyer Changchun, Type 054A frigate Xingzhou, and a Type 903 supply ship (for at sea refueling). The Changchun, pennant number 150, is a modern air defense destroyer with 48 long-range HHQ-9 surface-to-air missiles, and also has a powerful phased array radar (the Type 346), that can track hundreds of targets at ranges of 250-310 miles. The Type 054A Jingzhou frigate, pennant 532, is optimized for anti-submarine and medium-range air defense missions; its towed array sonar is well suited for tracking enemy submarines. 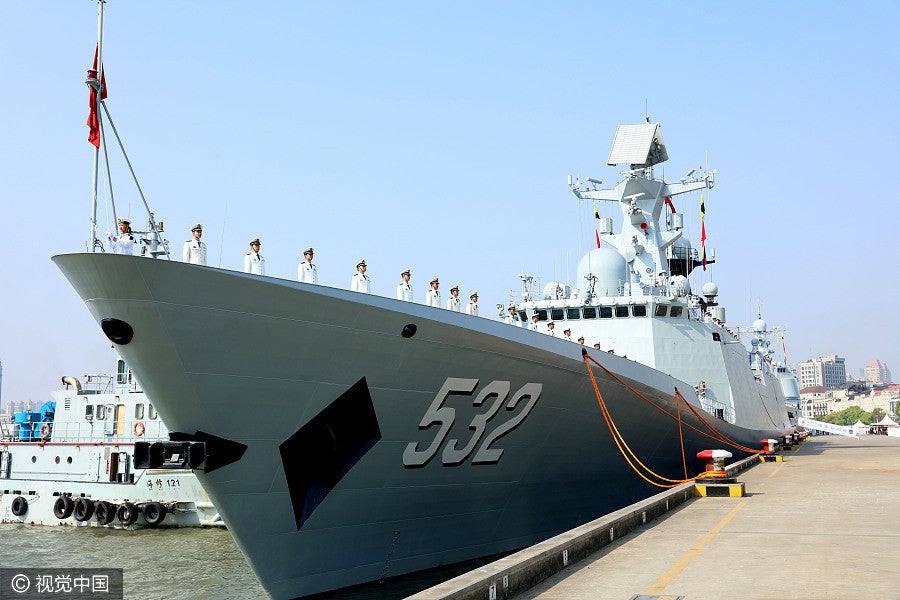 The Type 054A frigate Jingzhou, commissioned in January 2016, is one of China’s newest anti-submarine warfare ships.

The task force left China on April 23, on the 68th anniversary of the founding of the PLAN, with Admiral Miao Hua, the PLAN’s top political officer, present at the departure ceremony. During the six months, the task force will visit Asia, Africa and Europe, likely passing through the Suez Canal. Given that the task force will almost certainly be near the Horn of Africa, it is likely that it may make a brief anti-piracy patrol in those waters. 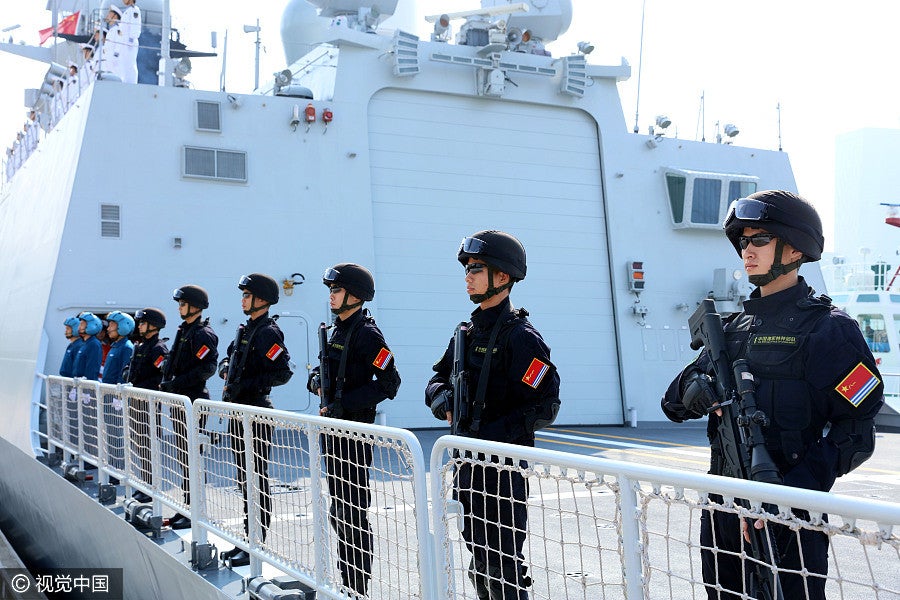 The frigate Jingzhou will carry a complement of naval commandos; Chinese naval personnel have often participated in interdiction and boarding actions both in international exercises and anti-piracy patrols.

Its route also reflects China’s broader strategic priorities. The task force will sail through Southeast Asia, into the Indian Ocean, through the African and Middle Eastern waters, and finally to Europe. All those regions are part of the “One Belt, One Road” (OBOR) initiative, where China is planning to invest hundreds of billions of dollars in infrastructure and transportation, both to increase economic activity in those areas and to facilitate land and sea transport links to the European market.