China has a new jetliner—here’s what that means

How the C919 airliner fits into China's larger aviation future. 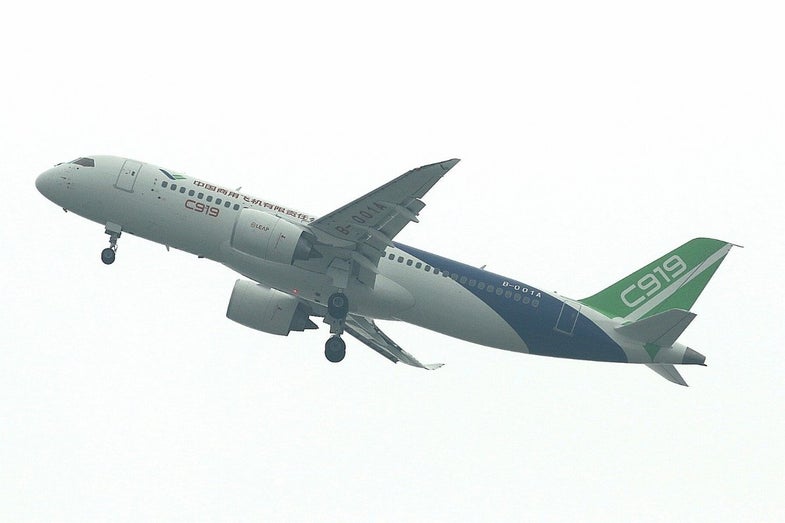 The C919 airliner, built by the Commercial Aviation Corporation of China (COMAC), had its maiden flight on May 5, 2017. Chinese Internet, via Andreas Rupprecht
SHARE

On May 5, the COMAC C919 jetliner made its first flight. It’s a major triumph for China, who has invested a lot to build up its civilian aerospace industry.

Let’s talk about the plane: The twin-engined, narrow-body C919 has a maximum takeoff weight of 77 tons, a range of about 2,500 miles (about 3,400 miles for the extended-range version), and space for 160 passengers. Its contemporaries in the world of twin-engine single-aisle crafts are the Boeing 737 and Airbus A320, so the market is projected to make up the majority value of $1 trillion, with an estimated 6,000 airliner sales in China over the next two decades. China’s also taken a lead ahead of Russia’s United Aircraft Corporation (UAC), whose similar MC-21 jetliner has yet to make its first flight. 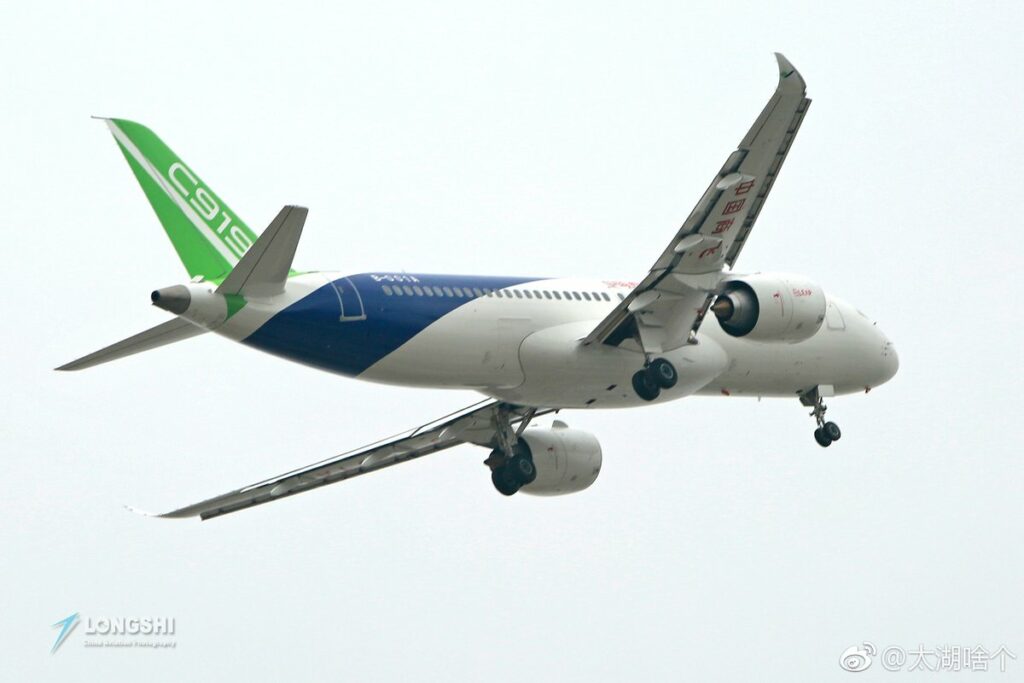 Smartphones of the Skies

The C919 uses LEAP-1C engines made by the French-American joint venture CFM.

Today, aircraft makers like Airbus, Boeing, and COMAC are similar to smartphone makers in that they buy and integrate highly specific, third-party manufactured equipment into the end product, with much of the profit margins coming from maintenance, service, and upgrade contracts. Just like its Airbus and Boeing counterparts, the C919 relies on outside suppliers—often western ones—to supply critical systems like the LEAP-1 engines, avionics, and the landing gear. China hopes, though, that Chinese suppliers will start supplying the C919 and other jetliners with parts. Beijing hopes that the C919 and any eventual domestic supply chain will boost efforts to establish a domestic supply and research base. 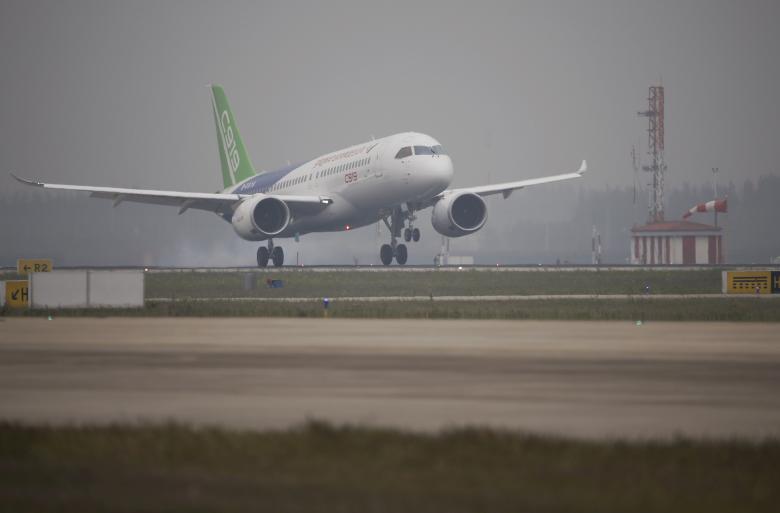 After a 90-minute flight, the C919 prototype returned to its home airfield in Shanghai. With already 500 (mostly domestic) preorders, China hopes that the C919 will also have significant export prospects.

Currently, the vast majority of the C919’s 500-plus preorders have come from Chinese airlines. In April 2017, European Aviation Safety Association (EASA) agreed to help validate Chinese aviation authorities’ certifying process of the C919’s airworthiness. An EASA endorsement of the C919’s airworthiness would increase its export prospects, especially in Asia and the Middle East. After EASA certification, the C919 could hope to win approval from the FAA sometime in the mid 2020s. 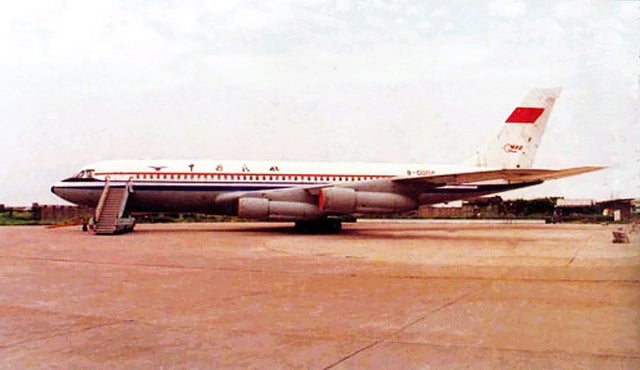 Designed by the Shanghai Aircraft Research Institute, the Y-10 first flew in 1980, but its outdated technology meant that only three were built. It was retired in 1984, four years after its first flight.

Despite claims elsewhere, the C919 is not China’s first large jetliner. The Shanghai Y-10 was a four-engine narrow-body airliner (like the Boeing 707 and 720) that carried up to 178 passengers and had a 110-ton maximum takeoff weight. It first flew in 1980, after years of development, but retired in after only three aircraft were built, due to its outdated technology (it had to use Pratt & Whitney JT3D-3B engines) and fuel inefficiency. Its autarkist connections to Red Guard ideology did not help it politically, either. Its chief designer, Wu Xingshi, would also design the ARJ-21, the next Chinese jetliner. 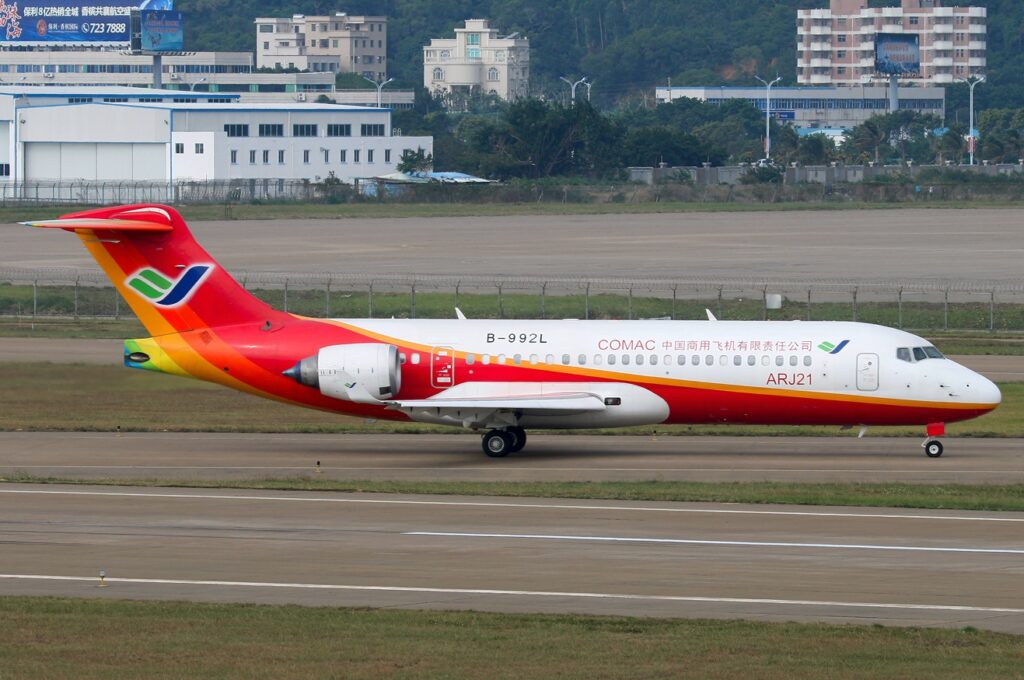 The ARJ-21, which first flew in 2006, is a regional passenger jet that marked the revival of China’s ambitions in the jetliner business.

The ARJ-21, China’s first jetliner since the Y-10, would have different problems. As COMAC’s first jetliner, the ARJ-21 is a 98-passenger, 47-ton twin-engine jet in the same class as the Bombardier CRJ700 and Embrarer E Jets. However, the ARJ-21 suffered the indignity of an eight-year gap from its first flight in 2008 to entering service with launch customer Chengdu Airlines in 2016.

This delay can be attributed to COMAC’s inexperience in obtain a flight worthiness certificate from Chinese authorities and quality control issues on the prototype. Presumably, EASA’s willingness to sign onto the C919’s certification process suggests that COMAC has learned from the ARJ-21 experience. 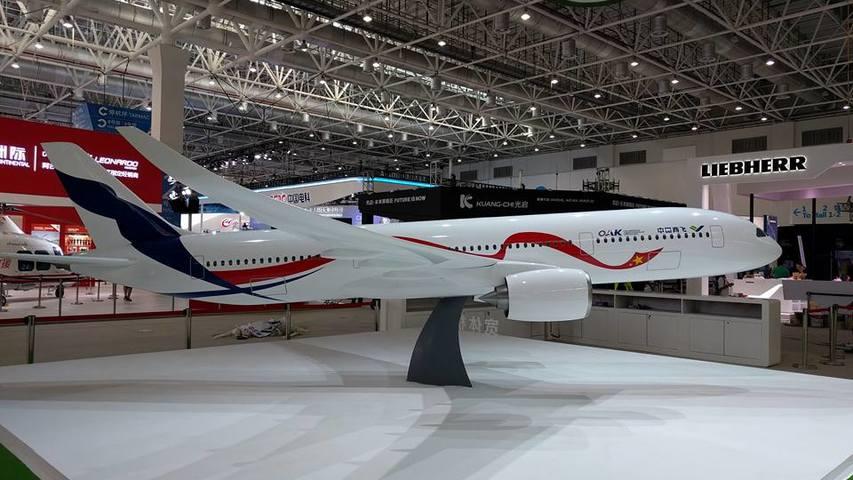 The Sino-Russian jumbo jet, with the tentative designation “C929”, will be assembled in Shanghai with a service entry date of 2025, after a $20 billion research and development program.

If the C919 is a success in domestic and export markets, it would be a huge step forward for the Chinese aerospace industry. COMAC also has big plans for building jumbo jets. In 2016, COMAC and UAC signed an agreement to co-develop a 250-seat, 290-ton, 7,450-mile-range plane tentatively designated the C929. Its first flight is targeted for 2022, and it will potentially enter into service by 2025. The C929’s construction will use large percentages of composite and titanium parts in order to reduce its weight, thus boosting payload, range, and fuel efficiency to compete with the Boeing 787 and Airbus A350. Like the C919 (and MC-21 for the matter), the C929 will likely use foreign parts, especially in the engines.

The C919 still faces large challenges, even with its successful flight. Its test flight and targeted entry to service dates have so far slipped from 2014 and 2016 to 2017 and 2020. But to be fair, almost all ambitious aerospace projects (including the Boeing 787 and Airbus A380) suffered delays, missing the initial service dates by years.