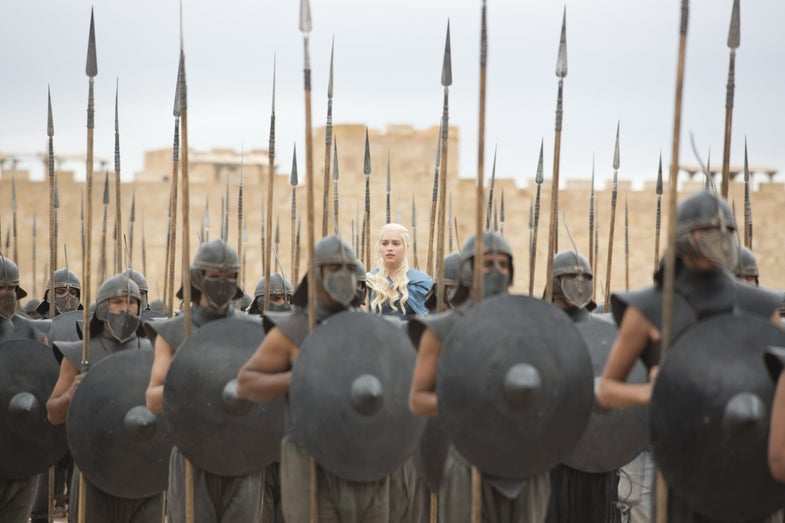 When I build a catapult, a trebuchet, a ­giant crossbow, it looks and feels authentic. I look at all the historical references I can dig up. I’ve had 25 years to amass a library on weaponry of all ages and ­cultures—but at the end of the day, my weapons are original.

Keep in mind, these old weapons were deadly. They were meant to kill. They carried a ton of force. Unfortunately, in my world, it’s not all about that—you err on the side of safety. So as engineers, we’ll look at Roman and Medieval siege weapons, make sure we get the right look for the show, and then make them just powerful enough to throw a projectile off-camera.

We do this by fooling your eye. So on a siege weapon, the large center rolling winch that you see is made to look period. But really the thing that creates torsion is a much smaller winch, made of metal, that sits inside it. This lets us drop power. We’ll throw objects—light objects—30 feet in the air, and 50 feet away. In a real siege, a catapult would need to throw farther than the enemy archers’ range, so real weaponized projectiles would fly 10 times farther than ours.

Another concern is getting your money’s worth out of these devices. They aren’t cheap and can take up to eight weeks to build. So we make sure they’re not one-hit wonders. One catapult we built for Game of Thrones stood 12 feet high by 8 feet wide, weighed one and half tons, and fired barrels with a sling mechanism. But we also designed it so we could swap in a spoon to hurl flaming balls. That is not inherent in the historical design. Still, in 25 years of building these things, nobody’s called me out on these differences. So if I’m not actually building authentic weapons, I’m certainly getting away with it.