Expanding the ways people connect with the digital landscape 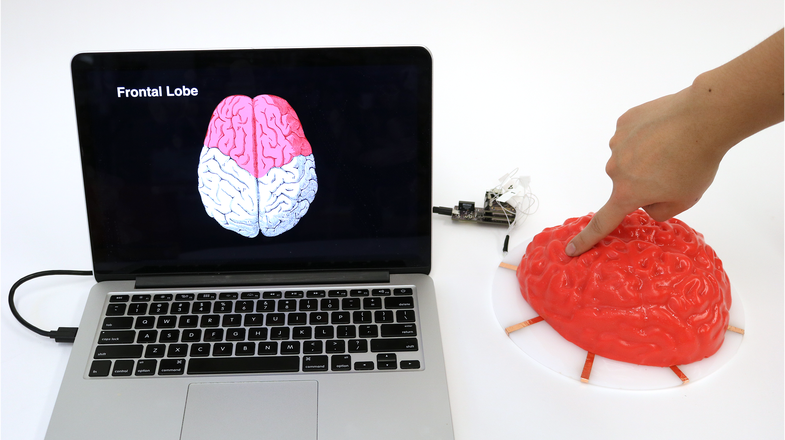 Yang Zhang, a 26-year-old computer science doctoral student at Carnegie Mellon University, created a touch-sensitive model of the human brain out of red Jell-O and milk using a mold he bought from eBay. Why? Zhang is the lead researcher behind a simple, inexpensive technology that allows regular objects—things like desks, playdough sculptures, or yes, a brain made out of fruit-flavored gelatin—to become touch-sensitive.

The invention permits a connection between “dumb” objects and electronics, meaning you could tap a certain spot on your desk, for instance, and it would launch an application on your computer.

The touchscreen on your phone is perfect for the precise kind of input that typing out a text message or email demands. But the idea behind this technology, which the researchers call Electrick, is that it doesn’t need to be too precise: Zhang says their system is accurate, on average, to less than a centimeter. That’s good for doing something like touching a wall in your home in the right spot to turn on a light, for example.

Electrick requires a few things to work, among them a surface that’s slightly electrically conductive, and electrodes to create and sense an electric field. But the researchers can make nonconductive surfaces like steering wheels compatible with the technology by spraying them with carbon conductive paint (which is available on Amazon). Crucially, Electrick also needs a power source, which could be from a connected laptop or a battery.

When someone touches the object, “it will draw some of the current to the ground,” Zhang says. “That will distort the electric field, and by sensing that distortion, we can learn where the user touches.” The technology is called electric field tomography.

On the software side, Zhang and his team used machine learning to help the computer know the relationship between the electrical signal and the actual spot on the connected object the user is touching. In a video that Carnegie Mellon produced on Electrick, a person pokes the brain, and a laptop shows that the touched part of the Jell-O creation was in fact the frontal lobe.

The Jell-O brain became touch-sensitive because it was placed on top of electrodes, which created the electric field. The Jell-O itself is electrically-conductive enough for the technology to work, although Zhang points out that they added milk to it to make it darker in color and thus more visible on camera.

Zhang is interested in making lots of normal objects touch-sensitive, and thus closing a gap between people and the digital landscape. “We’re missing something, which is the everyday objects with irregular surfaces, and then huge surfaces,” he says.

Using commonplace objects in the world as touch interfaces isn’t a totally new concept. Levi’s is planning to release a jacket this fall that incorporates fabric as an input mechanism (special conductive threads from Google’s Project Jacquard underpin the tech) and will cost about $350. The jacket’s sleeve responds to touch gestures that tell your phone to do things, like decline a call or play music, and connects with your phone via Bluetooth. Unlike the Jell-O brain, however, you can’t eat it.