Homeland Security Company Wants To Sell Hoverboards To The Military 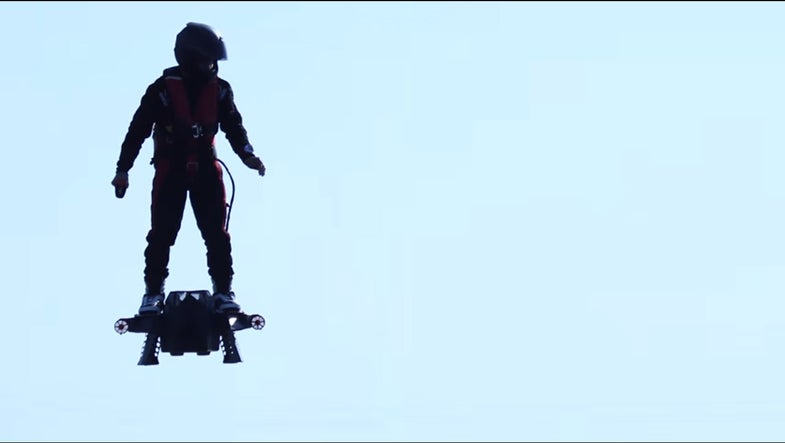 Personal flying machines are a standard dream of the future. Hoverboards, promised in 1985’s Back To The Future Part II lifted their riders off the ground and carried them on a thin cushion of air through the world. We have many more hoverboard-like devices now, but most are on wheels, or levitate over special magnetic railings. Zapata Industries’ Flyboard aircraft is, as the name suggests, a board that actually flies. And now a major security company plans to buy it, and maybe even sell it to the military.

Implant Sciences is the company that intends to buy Zapata Industries. Previously, Implant Sciences made bomb detectors for the Department of Homeland Security–specifically the TSA–which is an important if unglamorous task. Moving into vehicles is a bold move, and the Flyboard is an especially bold craft.

From the letter announcing the acquisition:

Flyboard is an impressive machine, blowing away the previous hoverboard flight record by traveling eight times the distance in a demonstration.

The military is certainly one potential customer for times like this, and since the 1950s the U.S. Army in particular has looked for a lightweight, low-flying fast vehicle that can carry people. The job is done mostly by drones now, but it’s easy to imagine a human scout flying around on a hoverboard. Even if it ends up being a work of fiction.