Next step: a garment that releases a nice aroma at the gym. 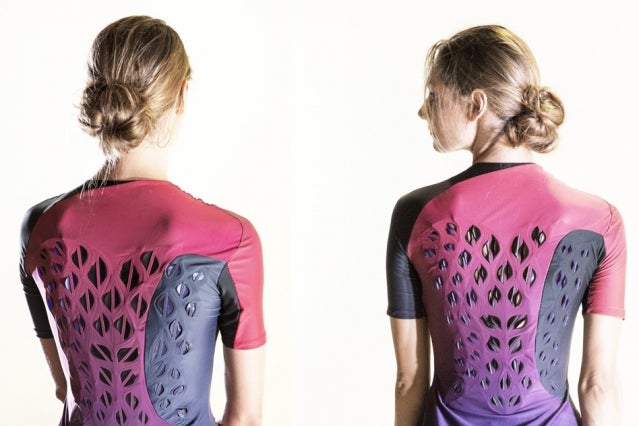 Many rain jackets have zippers at the armpits that, when opened, let out perspiration and funk that would otherwise stay trapped inside. But researchers from the Massachusetts Institute of Technology have created a prototype of a wearable that vents itself automatically in response to sweat—and it does so using bacteria.

Wen Wang, the lead author of a new study about biohybrid wearables in the journal Science Advances, says that the garment with bacteria-triggered vents represents just a stepping stone on their way to creating shirts that do something even better: produce a pleasant smell when you sweat.

To make the prototype garment, the researchers experimented with different structures of latex and bacteria, says Wang, a bioengineer and former research scientist at MIT’s Media Lab and the university’s department of chemical engineering. One such configuration involved just two layers: bacteria on one side, and latex on the other. But what worked best for creating the vented wearable was coating latex on both sides with a type of bacteria called B. subtilis.

With that sandwich-like set-up, the latex naturally stays flat. However, when the person wearing it starts to sweat, the bacteria on the inside (closest to the skin) absorbs moisture and relaxes, causing the latex to bend away from the skin and—ahhh— open up a little ventilation flap.

What’s more, the system works whether the bacteria are alive (as in growing and dividing actively) or not, according to Wang.

“If you just want it to bend, you don’t need it to be alive,” Wang says. That’s because it works, she says, because of the “mechanical performance of the bacteria.” Elements of the bacteria’s cells, like DNA and polysaccharides, bend in response to moisture.

But there’s one thing they haven’t done with the clothing yet, she says: wash it. They need to figure out ways to ensure that the bacteria stay attached to the fabric of any wearable beyond the prototype stage, perhaps by causing bacteria to bond chemically to a fabric or even integrating bacteria into the threads of a fabric.

Talking about washing clothes leads Wang to ask a question that many children and teens have probably also wondered: why bother to launder your clothing in the first place? She says that stuff like spilled wine or blood on your dirty shirt could be food for bacteria (or more likely, yeast) that could remain alive and gobble up those substances and emit a nice odor in the process.

“That’s just the future vision,” she adds, “we haven’t done it yet.” To do that, they’d need to find a way to get the microorganisms to stay on or in the fabric; they’d also need to ensure the bacteria or yeast would have a “reservoir of energy” even when they don’t have a food source.

Imagine, Wang wonders, if every time you went to the gym, microbes like yeast could consume your sweat and release a smell like bread? After all, a bready aroma might be nicer to sniff at the gym than, you know, the odor of that sweaty person on the treadmill next to you.