After busting through a glass ceiling, Maya the agave plant is dying as dramatically as possible

The iconic succulent’s 60-year reign over Chicago is coming to a bittersweet end. 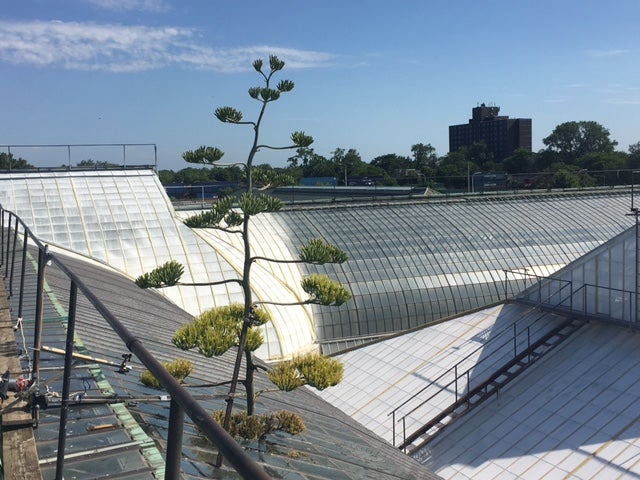 On the west side of Chicago sits Garfield Park Conservatory, a venerable crystal palace rising from acres of lush gardens. Its iconic glass roof houses more than 2,000 different plant species, many straight out of a Dr. Seuss book. Adding to the whimsy this summer has been a peculiar-looking stem sticking out from the roof, clad with stalks of yellow flowers. It’s not an elaborate lightning rod—it’s a mega-succulent that the conservatory just can’t contain.

Stepping back inside to the Garfield Park’s desert house, there’s a familiar yet jumbo-sized amalgamation of greenish-blue agave leaves. The eye wanders up a palm-like trunk rising from their center and reaching the peak of the room’s 25-foot ceiling. And it just keeps on going. This is the conservatory’s beloved century plant, affectionately named Maya. And while she can’t quite measure up to the city’s downtown Willis Tower, she’s clearly a skyscraper in her own right.

Maya has proven an expert at growth spurts: That trunk (called a quiote), which tops out at more than 38 feet, didn’t exist in January. In less than eight months, the plant has reached the height of a two-story house. It gained as much as seven inches in one single, prolific day.

But this isn’t puberty for Maya; it’s a reproductive burst and a dramatic death cry rolled into one. Having been a stalwart resident of the conservatory for nearly 60 years, this century plant is on her way out—and giving herself one heck of a sendoff.

The name “century plant” is a misnomer, says Ray Jorgensen, a floriculturist who runs the conservatory’s desert house. Most wild specimens of Agave americana, as they’re known in scientific circles, begin this “death bloom” once they reach age 30. In the cushy conditions of captivity, they can live for more than twice as long—and grow much larger.

When a century plant’s time comes, it sends up an asparagus-like quiote (agaves, as it happens, are in the asparagus family), which branches out into thousands of yellow blossoms eager for pollination. It dies shortly after shedding those flowers, having used up all its stored energy in hopes of spawning a new generation.

Jorgensen has been working at Garfield Park for 20 years, and he remembers meeting Maya as a wee seven-foot-wide plant—half her current size. He says the conservatory staff always knew her death bloom would come eventually, but they didn’t know when. They thought they got their answer last fall, when a giant cone—soon to be the top of the quiote—formed at the center of the agave’s leaves. But Jorgensen says the growth stalled, most likely due to the extra-arid conditions in the desert house during that time. Once he gave the plant a normal amount of water in January, Maya’s days were numbered.

“It was like, ‘OK, I got what I need,’” he says. By February, the height of Maya’s quiote had reached 10 feet and showed no signs of stopping. Unfortunately, neither did this year’s brutal Chicago winter.

Wild century plants can grow quiotes between 9 and 27 feet tall, says Jorgensen. Given Maya’s already exceptional size and age, he understood that the room’s 25-foot ceiling might pose a problem. But she had started her death bloom much earlier than her wild cousins, which typically bloom in late summer or early fall, which complicated matters.

“We knew that we might potentially have to take the glass off,” he says. But at the rate Maya was growing, she was going to butt heads with the glass ceiling while it was still too cold for the plant to survive outside.

Century plants can handle a bit of frost, but certainly not a polar vortex, so Jorgensen slightly scaled back the temperature of the room in hopes of temporarily slowing Maya’s meteoric rise. And sure enough, he was able to tame the succulent beast, curbing the quiote’s growth to an average of two inches per day.

“It’s interesting to have our own little experiment,” Jorgensen says.

In mid-March, about three weeks before the quiote reached 25 feet, crews removed one of the ceiling’s glass panels to make way for Maya’s grand finale. In true Chicago fashion, the plant was greeted with two spring snowstorms, which caused one of the branches that had peeked through to fizzle out. But that didn’t stop her, and by the end of May, Jorgensen recorded the plant’s first flowers.

The century plant’s primary natural pollinators are lesser long-nosed bats, which drink its nectar to fuel migrations across North America. Jorgensen was concerned that the plant would miss its symbiotic partner, but when he first walked out onto the conservatory roof to check on the blossoms, they proved an exotic buffet for local flies, wasps, bees, and beetles.

In their natural habitat, century plants are even more popular among humans. Native to central Mexico, the agave has been a staple of Mesoamerican culture for millennia. Jorgensen says it’s the most useful and therefore venerated plant in the Americas. Its thick leaves, roots, and flowers can be eaten or woven into rope for clothes and baskets; its sap can be fermented or distilled to produce mezcal and tequila; and its sharp spines make excellent natural fences. It’s no wonder the Aztecs had a goddess of agave: Mayahuel, for whom Garfield Park’s own Maya is named.

Even before the Aztecs, nomadic people in the region chose different agave species for their unique traits, carrying them to new places and inadvertently changing their evolutionary paths. Many of the now 200 species of agave likely owe their existence in part to these humans.

As summer in Chicago gives way to fall, most of Maya’s blossoms have fallen, and the “bloom” part of her death bloom is at its end. Even after the plant is officially dead, her quiote will stay up as long as it’s warm enough for the conservatory to maintain a hole in its ceiling. But once another winter begins to set in, Maya’s living neighbors will need protection from the chill. Jorgensen’s not exactly sure how they’ll manage to remove the massive Maya from her longtime home, but two things are certain: She won’t go down easy, and she’ll be sorely missed.