These toilets use worms to compost your poop, and they are our future

As park visitation grows, more areas are seeking alternatives to the usual pit toilets and catholes. 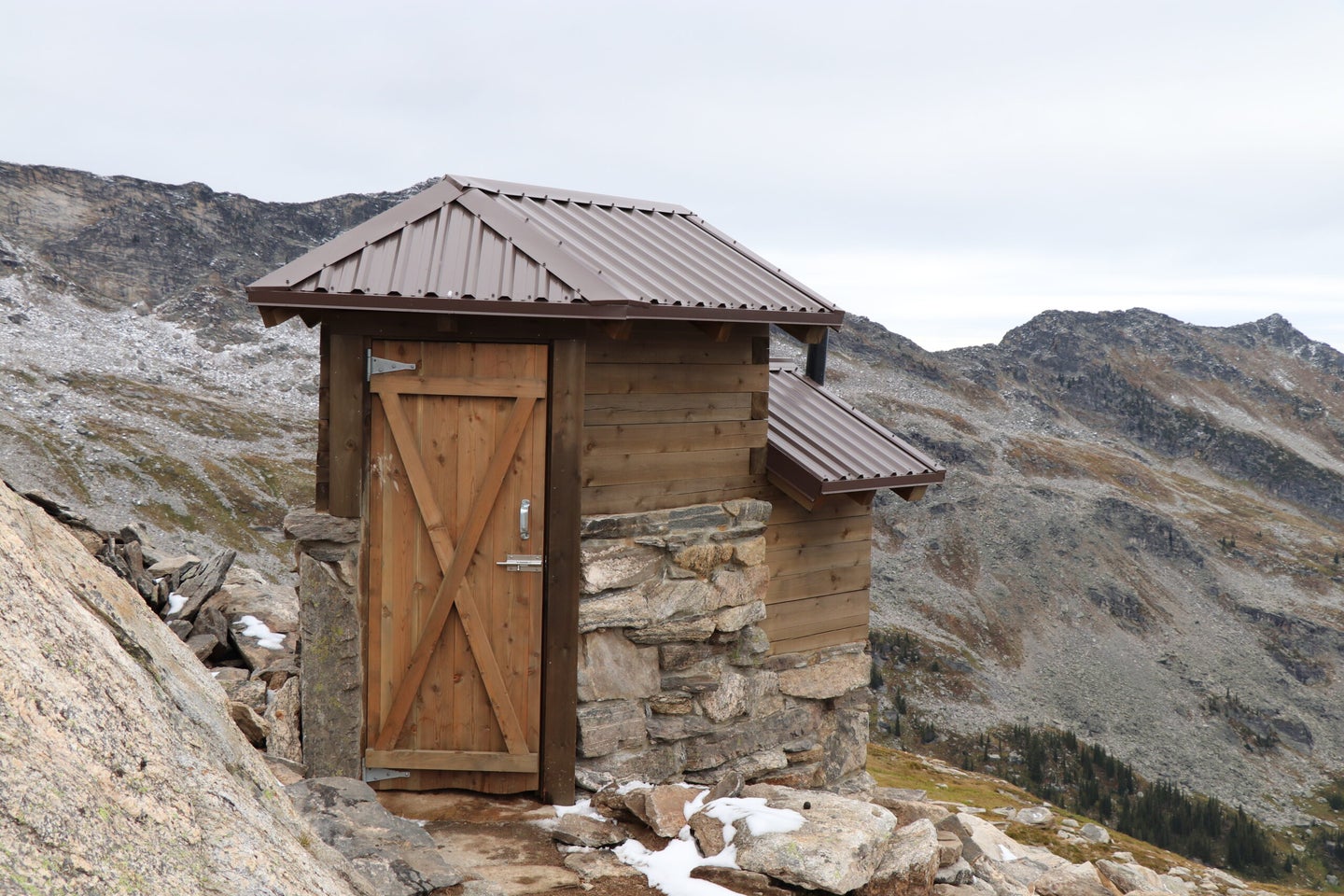 When I visited Squamish, British Columbia for a rock climbing trip, I did not know I was also visiting the origin of a backcountry toilet revolution. One day during the trip, my gut rumbled just as we reached the granite cliff we’d spend the rest of the day scaling. I thought back to the little building we’d passed hiking in, which looked like a typical wood-sided pit toilet, except for the smaller structure attached behind it.

I hiked back to it and opened the door to reveal what a sign inside informed me was a “Urine Diverting, Vermicomposting Toilet.” Inside the toilet, a conveyor belt tilted up toward the back of the building. Pee runs down the conveyor belt and into the soil, where it’s a nutrient source for plants and microbes, I read. Meanwhile, poo is transported to a chamber behind the toilet, where earthworms and other soil organisms eat and decompose it. After doing my business, I pumped a pedal next to the toilet five times, which spun the conveyor belt toward the poo chamber. I returned to the cliff and excitedly told my friends about the coolest toilet I had ever seen.

Increasingly, land managers are looking to new ways to solve the problem of human waste in the backcountry, where the convenience of modern plumbing is unavailable. There are more people enjoying public lands than ever before, and that means there’s more poop than ever before. Across the past decade, there’s been a 15 percent increase in visits to Bureau of Land Management lands and an 18 percent increase in national parks. National park visits have topped 300 million for four years in a row. While the simple cathole method—digging a hole and burying your waste in it—may have once sufficed in many areas, the sheer volume of feces today presents a hazard to health, waterway pollution, and aesthetics; no one wants to see partially buried turds and TP when they’re in the backcountry (or anywhere, really). “What tends to happen is that over time, as visitation generally tends to increase, that dispersal strategy [of digging catholes] no longer works,” says Ben Lawhon, education director for Leave No Trace Center for Outdoor Ethics, an organization focused on educating the public about responsible outdoor practices.

Historically, the next step up from the cathole was a pit toilet; literally, a deep pit in the ground with a privy over it. When one pit fills up, it’s covered with soil, and the privy is moved to a new pit. But it’s unknown how long it takes the contents of these pits to break down, making the live bacteria, viruses, and protozoa in the poo a continued public health threat. In fact, the U.S. EPA, under the Safe Drinking Water Act, considers pit toilets to be “large capacity cesspools.” The agency banned the construction of new pit toilets in 2000 and is giving the Forest Service until 2024 to shut down its existing facilities.

But if you can’t flush the waste away or simply dig a pit, what other options are there for remote areas? Many national parks and other public lands use vault toilets, which are kind of like pit toilets except they keep waste sealed in an impermeable chamber, so it doesn’t leach into surrounding soil and groundwater. A porta pottie is technically a vault toilet. Most restrooms you’d visit at a park parking area are vault toilets. Although a well-maintained one isn’t supposed to smell, my experience tells me they almost always do.

But in remote areas without direct road access, maintaining vault toilets is a burden to park agencies. Facilities staff need to pump out the waste, then haul it all out to be treated and disposed of. As a recent REI Co-Op Journal article points out, officials spend about $20,000 yearly using helicopters to fly out human waste in 55-gallon oil drums off Mt. Rainier. At Rocky Mountain National Park, llamas carry bins of waste down the Longs Peak trail. And along the Appalachian Trail, volunteer crews drive out to remote vault toilets in a truck equipped with septic pumper nicknamed the “Big Gulp” and bring the sewage back to an RV septic treatment center.

The difficulty and hazard of hauling raw sewage has led managers to consider other options. As early as 1980, remote national parks have used composting toilets. A 1995 Forest Service publication describes a basic design: a privy atop a “digester tank.” Toilet users add a scoop of carbon-rich material, usually wood shavings or sawdust, after going. The woody material is supposed to control moisture and balance the carbon-to-nitrogen ratio of the waste, making it an ideal food for microbes.

In some areas, these simple composting toilets have been successful. There are many along the Appalachian Trail, according to John Hedrick, vice president of operations of the Potomac Appalachian Trail Club, which maintains 240 miles of the AT between Pennsylvania and Virginia. Trail workers construct two bins, building a toilet over one. When one fills up with waste and wood shavings, which takes about two years, that bin is sealed up and the toilet structure is moved to the adjacent bin. After at least two more years, that sealed bin is considered composted and the contents resemble soil. Volunteers sort errant trash out of the compost and then bury the decomposed waste in the woods. The process eliminates the need to pump out vault toilets and the public seems to like them better, too. “[Visitors] prefer the composting toilets,” says Hedrick. “They don’t smell as bad.”

While Hedrick says that the composting toilets have worked out fine across the seven years they’ve had them, other locations haven’t had as much success. Back in British Columbia, officials struggled with a number of “composting” toilets not actually composting—the waste and sawdust mixture failed to heat up with microbial activity, which is necessary to create compost. So they started to test a new design by Geoff Hill, director at Toilet Tech Solutions.

The problem, according to Hill, was mixing urine and solid waste. When the two are combined in the chamber, a lot of ammonia forms—that’s the compound responsible for the sharp scent of a vault toilet. This ammonia is kills off would-be decomposer microbes. In his dissertation research, Hill found that all of the so-called composting toilets he studied in western Canada and the Pacific Northwest failed to produce compost. “None of the composting toilets I visited made compost,” says Hill. “Ammonia is toxic and you can use it as a commercial cleaner. So now you’ve started sterilizing this waste, making it toxic to all forms of life. The whole concept of a composting toilet is a total joke.”

Inspired by urine-separating, vermicomposting (worm composting) toilets he saw in European backcountry areas like the Alps, Hill created a new design—the conveyor belt toilet I used in Squamish. Because urine is diverted to a septic field below the toilet, there’s no ammonia problem. Bugs can get to work decomposing the poo.

Hill’s first toilet was built about 10 years ago at the Smoke Bluffs, another park in Squamish, an “extremely popular” climbing area with 1,500 visitors on busy summer weekends, according to Brian Moorhead, the Vice Chair of the Squamish Access Society, an organization protecting climber access in the Squamish area.

Before the vermicomposting toilet, the Smoke Bluffs visitors used porta potties, which had to be pumped out every week, costing $90 per toilet per month to maintain, says Moorhead. While the new vermicomposting toilet cost $15,000 in Canadian dollars, it’s needed little in maintenance since. The toilets have to be “raked” occasionally: the poo and TP in the front of the decomposing chamber moved to the back, where the waste can decompose more fully while new material accumulates in the front. Despite how many visitors the park sees, Moorhead says they didn’t do their first raking until three or four years in. “That [toilet] was done as a test case and proved very, very successful,” he says. “We see it as the way forward.”

That toilet’s success had led to the construction of more around British Columbia, says Moorhead. Justin Sabourin, facilities engineer with the B.C. Ministry of Environment, says there are now about 20 of these urine-diverting toilets in B.C. parks—and there are plans for more. Perhaps unintentionally, Moorhead helped start what became a trend in backcountry toilet technology. “It’s a standing joke: Brian is an expert in shithouses,” he says. “Not quite the legacy I had in mind.”

Officials at Smith Rock State Park in Oregon are also pleased with Hill’s design. Park ranger Josie Barnum says that the park’s two composting toilets weren’t cutting it—the waste simply was not decomposing: “Three to four times a year, staff would have to hand shovel partially decomposed waste and take to the landfill.” So in 2012, they retrofitted one of the compost toilets with Hill’s design—the first in the states. The new toilet requires some maintenance, including a twice-yearly raking and cleaning of the conveyor belt every couple weeks, but not as much as the remaining composting toilet. “It’s definitely a great product,” says Barnum. “I don’t have anything bad to say about it.”

The bugs behind the toilet can eat so much crap that even high-use vermicomposting toilets like the one at Smith Rock, which averages 100 uses a day during spring and fall, don’t need to be emptied of the decomposed waste for up to 20 years. But the finished product is not really “compost,” says Hill, because it can still harbor pathogens (though their numbers are reduced from the raw sewage). He even verified this with an experiment in his garage in which he fed hookworm-infested poop to worms and looked to see if their digestion killed the parasite. It didn’t. “Vermicomposted human waste is not fully safe or sanitized material,” he says, so it does still need to be disposed of off-site. Still, the huge reduction in the volume of waste saves time and effort for land managers.

So although some areas are content with their basic composting toilets, for other, heavily-used parks, Hill’s design is showing a lot of promise. Even in rocky, high-altitude zones where decomposition isn’t feasible, like Colorado’s Longs Peak, the urine-diverting mechanism cuts down on the overall amount of waste. A version of Hill’s technology installed there sends the poo to a bag, which is later packed out by those same llamas. “Now they’re packing out about one-fifth of the waste off the mountain,” says Hill.

In the future, we’ll probably see more interest in other new dry toilet technologies as the number of people visiting parks grows. “At least in my experience, the land management community is evolving at a rapid pace in their management [of human waste],” says Lawhon. “We’re seeing a rapid adoption of different techniques to address the problem.”

Hill has now sold about 200 toilets and says that number is growing. “I can’t quite keep up with enquiry,” he says. “I think over the next couple years, it will go from a new technology to something that’s well-establishing and going on all over the country.”