Identifying the right chemicals in cone snail toxins could lead to therapeutic effects. 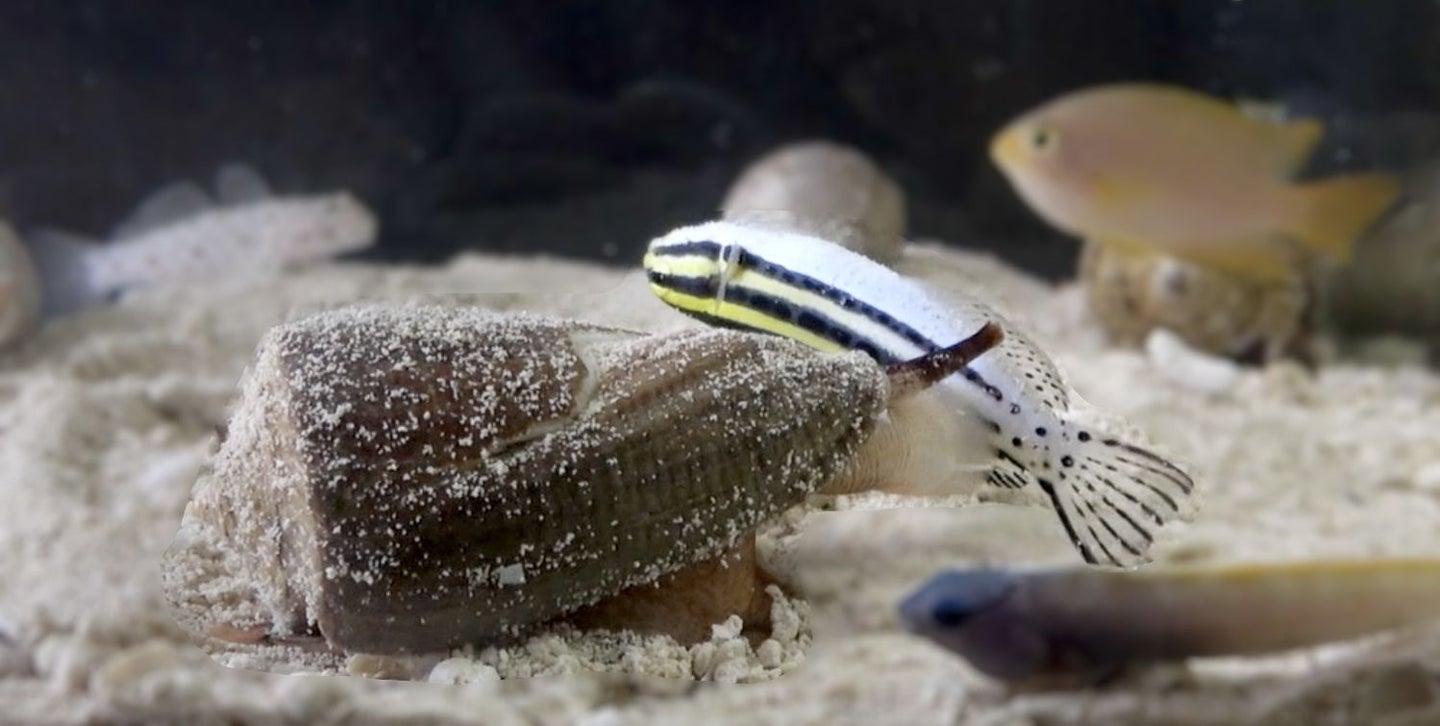 Cone snails might seem unassuming, if not beautiful in their colorful shells, but these ocean-floor invertebrates are regular marine murderers. As a fish swims nearby, the predator, which can grow up to 9 inches long, will slowly creep out its tongue-like proboscis. In a flash, the creature will harpoon its meal and pump it full of a paralyzing venom.

“In general, you don’t want to get stung by a cone snail,” says Iris Bea Ramiro, a biomolecular researcher at the University of Copenhagen.

[Related: Rattlesnake venom is lethal, but understanding it could save lives]

The venomous sting of some cone snails is dangerous—and sometimes even fatal—to humans. But it turns out that the chemical cocktail could also be turned into a painkiller. In a paper published today in the journal Science Advances, Ramiro and a team of scientists identified a unique peptide from an understudied deep-water cone snail that shows signs of relieving pain. The compound shows promise in making future therapeutics, or analgesics, for patients with cancer, endocrine disorders, and severe and chronic pain.

The chemistry behind the venom

Not all marine snails have venom glands, but cone snails specifically pack a powerful, potent mixture. Upon injection, the venom sends the victim into excitotoxic shock, rendering them immobile in seconds. The snail then opens its mouth wide to engulf the entire prey, delivering a slow and painful death.

“When I first watched videos of them attacking, I was like ‘what the heck?’,” says Ramiro. “The fish seems just as large, or even larger, than the snail.”

The invertebrates’ venom was long known as toxic, but a string of new studies has revealed that it could hold surprising medicinal properties.

“For a long time, most people believed ‘killer snail’ venoms were largely made up of neurotoxins. This is not an accurate assessment,” says Mandë Holford, an associate professor of chemistry and biochemistry at Hunter College and research fellow at the American Museum of Natural History. There are over 1,000 known cone snail species, but only about 2 percent of those have had their lifestyles and venom closely analyzed, she adds.

Though she wasn’t involved in the Science Advances paper, Holford says she and other cone snail experts have learned through previous research that the venom holds a “clusterbomb of chemical molecules” beyond neurotoxins. These molecules, which mostly include proteins and shorter chains of amino acids called peptides, are good at hitting specific targets in an animal or human’s physiological system to block certain functions, like movement and vision. Some of them can also stop pain signals from certain receptors, making them prime candidates for therapeutic drugs. But a cone snail could have upwards of 200 different peptides in its venom—so the challenge lies in identifying specific chemicals and how they help reduce pain.

“Every species has a different venom profile, and so potentially, you have like a library of thousands and thousands of compounds waiting to be discovered,” says Ramiro. “It’s a matter of finding something that’s interesting.”

Looking at the different types of hunting strategies of cone snail species, and how the prey responds to the venom, can be a helpful starting point to find new chemicals, Ramiro says. When she had first learned about cone snails as an undergraduate student, she realized that many species were located in the tropical waters near the island where she grew up in the Philippines. “We see shallow-water cone snails in some markets and use them for food, like in soups, along with other shelled gastropods,” says Ramiro. (The locals boil the animals before consuming them, which likely breaks down the venomous components.) The shells are also prized among collectors. For the study, she worked with local Filipino fisherman who helped the team catch specimens from the species Conus neocostatus. These cone snails in the clade Asprella hadn’t been closely studied before because they live up to 820 feet down in the ocean, making them difficult to retrieve and keep alive in the lab.

The most common way a cone snail captures fish is with the taser-and-tether strategy, where the predator stabs the target, incapacitates it with the venom, and immediately swallows it in seconds. The second is a net-hunting technique that’s been observed in a few species. The predator emits an invisible cloud of venom into the water like a booby trap; when a fish swims through it, they become disoriented and easier to capture.

The Asprella cone snails, on the other hand, use a strategy that Ramiro and other researchers hadn’t seen before. “The stung fish seems normal and swims around,” she says. “After an hour or so it suddenly just gets sluggish.” When the fish falls back to the ocean bottom, it’s supper time for the snail, she says.

Ramiro’s team called the strategy “ambush-and-assess.” Unlike the fast-acting toxins in other shallow-water cone snails, the delayed paralysis from the compounds in the deep-water Conus neocostatus hinted that there might be other interesting chemical reactions going on. For further proof, Ramiro and her collaborators extracted the venom of a close relative, Conus rolani, and analyzed the molecular makeup. They were able to identify a particular peptide called Consomatin Ro1, which has a similar structure and properties that mimics somatostatin, a hormone found in humans and other vertebrates that inhibits the growth of cells and other parts.

Somatostatin has previously been studied as a potential drug candidate for neuroendocrine diseases—but it has a short half life of about one to three minutes, Ramiro explains. “That means it can stay in the body for only so long, it doesn’t really have an effect,” she says. “A lot of pharmaceutical companies have developed different analogues of somatostatin to make a longer half life. But when we got the structure of this consomatin from the cone snail, it was interesting that it not only looked like drug analogues, but it was more stable than somatostatin.”

The researchers then injected the isolated consomatin peptide into mice and saw that it had a similar effect seen in the cone snails’ immobilized prey: slow loss of balance, lethargy, and a sedative effect that lasted for about three hours. The researchers found that the peptide selectively activates one of the five somatostatin receptors that triggers pain relief effects in vertebrates, says Ramiro. This indicates that “it’s not just a lookalike” to somatostatin.

“When it’s a cocktail of venom, it can be toxic,” Ramiro explains. “But once we separate out the components, and we just look at one, we see that it does and can relieve pain.”

The team’s findings “confirm the hypothesis that no two venom arsenals are the same, even within a species,” says Holford. She notes that while the sequence of the other peptides they identified still needs to be further confirmed with a complete protein analysis, the bioactivity of the consomatin compound is a promising finding for future pharmaceuticals.

[Related: 4 plants that are scientifically proven to be therapeutic]

Currently, there are several drugs inspired by cone snail venom in clinical trials and one already on the market. The prescription medication Prialt is based on a compound found in the species Conus magus. Prialt was approved by the Food and Drug Administration in 2004 as a non-opioid alternative to morphine. However, the delivery method for the drug requires an invasive spinal injection; Holford’s lab is currently working on a better system to circulate cone snail peptides in the human body.

“There is a long way to go before getting to a [better] drug, but as with all venom-derived analogues, we know they work,” says Holford. “These relatively small invertebrates can produce a chemical cocktail of bioactive molecules that cannot be matched in any laboratory, anywhere in the world. We need to protect their biodiversity if we want to discover their chemical secrets.”

Ramiro agrees that there is much to be learned about natural pathways to drugs.

“The cone snails have already optimized [molecules] that are stable,” she says. “We can learn a lot from them, not just for biomedical applications, but also by seeing how they use venom in their environment.”