It's rare for hurricanes to tread these waters. 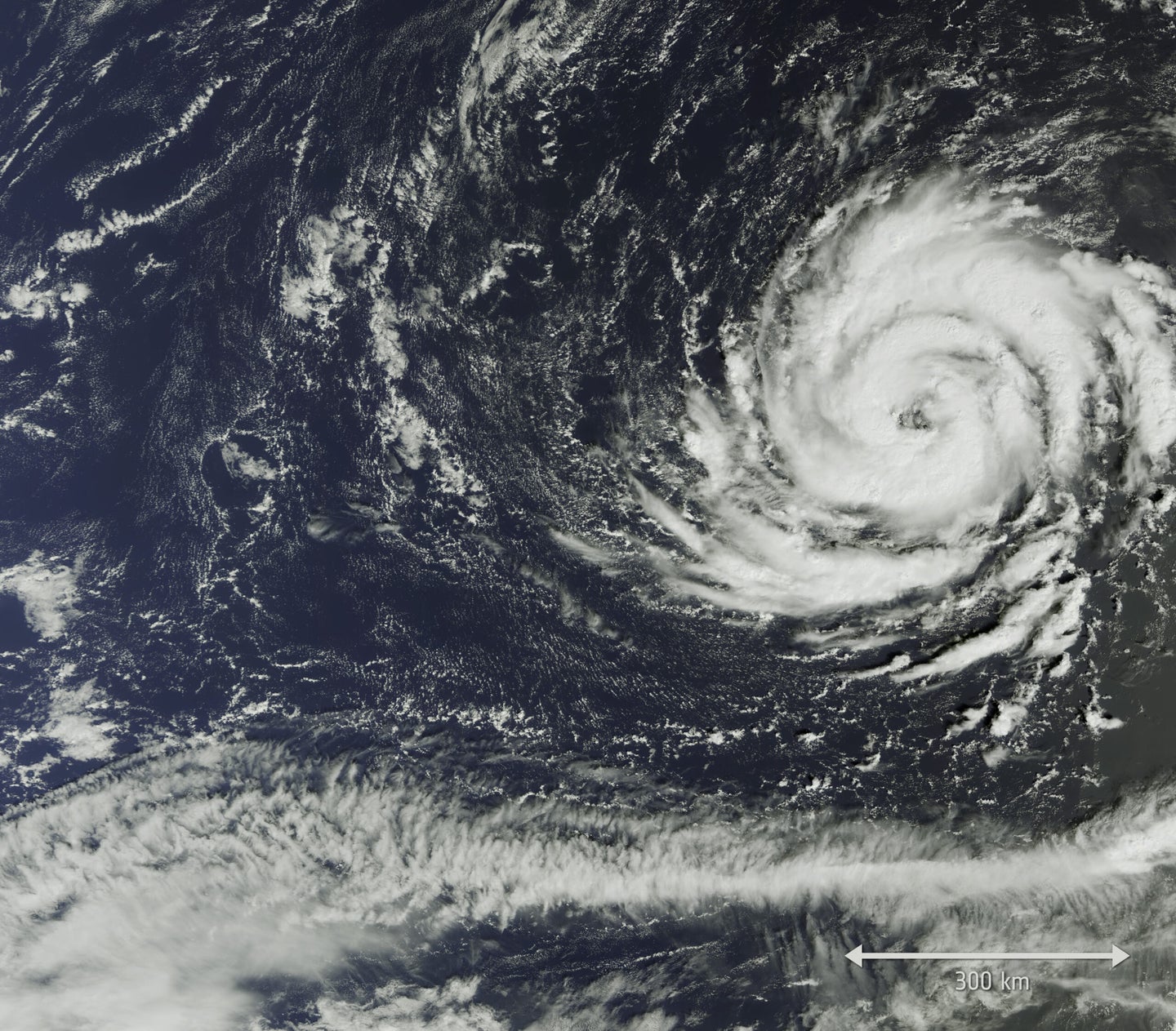 Hurricane Ophelia is an odd storm. It’s a picture-perfect hurricane with winds around 90 MPH, but that’s not the odd part, of course. What makes this storm weird is its location. It’s way out in the Atlantic, where it’s usually too cool for hurricanes to develop—much less survive. Ophelia is so far off the beaten path that instead of heading for the Americas (as so many storms have this season), the system will evolve and threaten Ireland and the United Kingdom early next week.

Ophelia is our tenth consecutive hurricane in the Atlantic Ocean. The streak began with Hurricane Franklin in the middle of August and continued straight through three devastating landfalls in the span of a couple of weeks. We haven’t seen 10 hurricanes in a row in the Atlantic since the late 1800s, a testament to the tenacity and power of this overachieving hurricane season.

This hurricane’s roots didn’t begin in the tropics like so many of the storms we’ve seen this year. Ophelia formed from a persistent low-pressure system that stalled out in the middle of the ocean last weekend. The system took advantage of a favorable environment to slowly develop tropical characteristics. Persistent thunderstorms developed near the center of the low, and temperatures throughout the core of the storm slowly warmed, meeting the criteria that defines a tropical cyclone. Hurricane Ophelia has steadily strengthened over the past couple of days. It was a decent looking storm by Thursday afternoon, sporting a classic structure and a well-defined eye.

We don’t normally see tropical cyclones as strong as Ophelia form in this part of the Atlantic Ocean. Vince quickly blossomed into a hurricane toward the end of the hyperactive 2005 season before making landfall in Spain as a tropical depression, marking the first known tropical cyclone landfall on the Iberian Peninsula. Hurricane Alex formed near the Azores Islands in 2016, but its location wasn’t the weirdest thing about that storm: Alex formed during the second week of January that year.

Ophelia formed where hurricanes usually go to die. It’s not uncommon to see storms in the northern Atlantic Ocean racing toward Europe in the waning days of their lives, after spending a week or more traversing more tropical waters. It’s less common to see storms get their start where Ophelia sprang to life, and we don’t often see a tropical (or at least tropical-influenced) storm of this intensity approaching the British Isles. Nothing about this storm is unprecedented or record-breaking, but it’s an odd storm in an odd spot.

How’d it overcome the odds? The water in this part of the ocean typically isn’t friendly to tropical cyclones. These storms feed off of warm water, after all. Once the supply of toasty brine runs out, the storms lose their source of energy and quickly begin to fall apart. But that doesn’t appear to bother Ophelia too much, likely because temperatures in the upper atmosphere are bitterly cold. The sharp temperature gradient between the lower and upper levels of the atmosphere are making up for the lower ocean temperatures, helping unstable air rapidly rise and fuel the intense thunderstorms that make up the strong core of the hurricane.

Hurricane Ophelia will begin to lose its tropical characteristics this weekend as it races toward western Europe. Tropical cyclones are warm storms through and through. Once the core of a tropical cyclone begins to cool off and it starts to develop cold and warm fronts, the storm is considered “post-tropical.” But despite the deceiving name, post-tropical cyclones are no less dangerous after they make their transition, and these evolved storms can wind up affecting an even larger area due to structural changes that cause the area of strong winds to expand. Hurricane Ophelia may technically cease to exist, but the storm it leaves behind could still be ferocious.

Ireland and parts of the United Kingdom are in line for a rough couple of days early next week as the storm formerly known as Ophelia rolls through the area. The National Hurricane Center points out that the track forecast for the storm is uncertain right now, but the odds are good that it will bring a period of intense winds, heavy rain, and rough seas to the British Isles. The storm will have all the force and effect of a hurricane without the title or the name. Power outages, downed trees, and flooding are possible across Ireland and parts of the United Kingdom.

Met Éireann—Ireland’s meteorological service—is advising residents to keep a close eye on the storm as it approaches the Isles, emphasizing the uncertainty in the forecast. A statement by the agency on Thursday noted that “it won’t be possible to quantify the exact timing, nor the strength or intensity of the wind and rain, in any great detail until later in the weekend.” Weather alerts issued by the U.K.’s Met Office read much the same, noting the potential for damaging winds, heavy rain, and scattered power outages in Northern Ireland and along the western coast of Great Britain.