Dangerous hurricanes come in all shapes and sizes (literally) 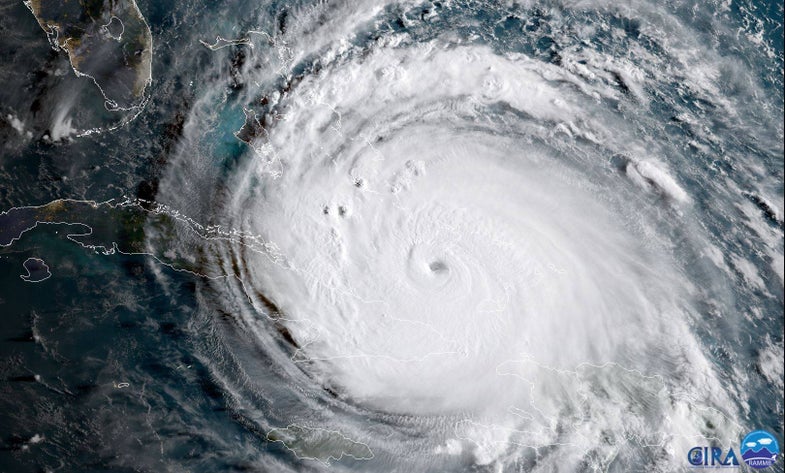 How big is a hurricane? If you look at these storms from space, they’re just tiny blips in a large, turbulent atmosphere. But a storm can grow large enough to cover entire states. Hurricanes come in all different sizes and shapes, and these differences can mean different threats for folks in a storm’s path.

One of the hardest things about trying to warn folks that a dangerous storm is approaching is that we tend to think in terms of what we’ve already been through. Hurricane Katrina was a unique storm. So was Hurricane Sandy. Tropical Storm Allison was Texas’ worst flooding disaster on record—until Hurricane Harvey crashed ashore this year. But while each of those systems unleashed its own catastrophe, the storms were all physically different in size, shape, and intensity.

The average tropical cyclone only measures a few hundred miles across. The clouds of a tropical storm or hurricane usually cover more space than the size of the wind field itself. Aside from the glaring exception of this summer, we rarely get to see the stereotypical hurricane with a perfect eye and that ominous buzzsaw appearance. Most storms are messy and ragged, and can look downright deceiving on satellite imagery.

Hurricanes are bad enough when they make landfall, but size really does matter when it comes to the effects of a storm. Hurricane Katrina was only a category three at landfall, but it packed the catastrophic storm surge—seawater pushed inland by strong winds—of a category five hurricane, in part due to the storm’s enormous size. Hurricane Sandy was devastating for the East Coast because it was huge when it hit New Jersey in October 2012. The storm only had peak winds of around 80 MPH at landfall, but its enormity—spanning from North Carolina to Maine—stretched out its destructive potential over a period of days, and pushed a significant storm surge into the coast.

Why do some storms span a thousand miles while others are barely larger than a bad squall line? Many of the large, memorable storms we track across the Atlantic for weeks at a time form from clusters of thunderstorms that slowly come together as they gather strength. These storms have the best chance to grow into a large, sprawling system. Hurricane Irma started its life small enough to just barely cover a city. When Irma rapidly grew into a hurricane on the morning of August 31, 2017, its hurricane force winds only extended 15 miles from the center of the storm. To put that in perspective, the storm’s core of intense winds was only about the size of Florida’s Lake Okeechobee. But by the time Irma made landfall 10 days later, it was large enough to engulf the entire state.

Other systems spin up from just one small and persistent thunderstorm. Hurricane Lee, which formed just a few weeks after Irma, got its start near Africa in the middle of September and fell apart soon after. Once its remnants reached the favorable environment of the central Atlantic a few days later, a small thunderstorm blew up near the center of circulation and powered the tiny cyclone to major hurricane strength within a few days.

Much like humans, tropical cyclones grow with age. These storms slowly expand as they get their act together. They can plump up by way of a phenomenon known as an eyewall replacement cycle. The eye of a hurricane usually only lasts for a day or two before a new eye forms and takes its place. The new eye is larger and, as a result, it can cause the size of a hurricane’s wind field to double in some cases. Hurricane Irma grew several times due to an eyewall replacement cycle, the effects of which are easy to see on the wind swath map above.

Shape matters as much as size. Lots of storms are lopsided due to dry air or wind shear disrupting their internal structure. One of those asymmetric storms was Hurricane Nate, which came ashore on the northern Gulf Coast earlier this month. Nate was a category one hurricane when it made landfall near Biloxi, Mississippi. The storm was completely lopsided at landfall, with all of the heavy rain and strong winds occurring to the east of the hurricane’s eye. Mobile, Alabama, saw hours of ugly weather during the storm, but New Orleans—which is only a little farther away from Biloxi than Mobile—hardly saw any hazardous weather from the hurricane as it passed to the city’s east.

It doesn’t take much for a storm to make a mess. After all, it only takes one gusty summertime thunderstorm to tear down trees and power lines. Even the smallest and most oddly-shaped hurricane can do a number to any area it hits.