Residents should take necessary precautions despite the storm's uncertain intensity 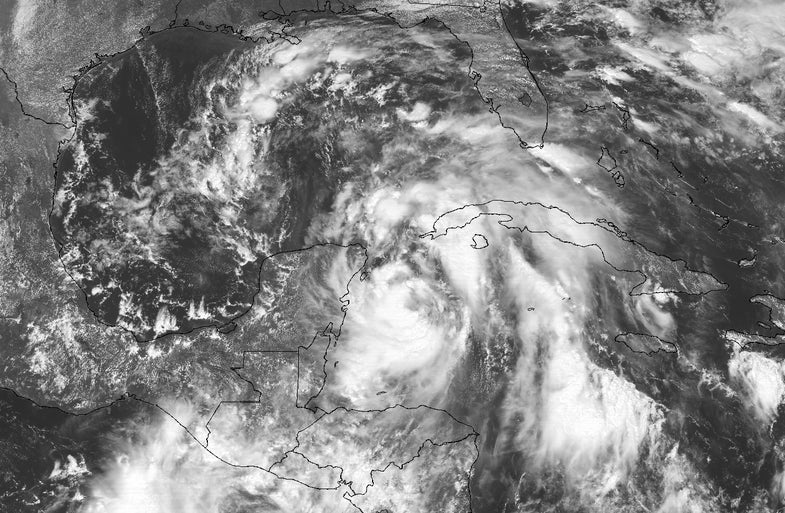 A visible satellite image of Tropical Storm Nate in the Caribbean Sea on October 6, 2017. NOAA/NASA
SHARE

Tropical Storm Nate will become the sixth major storm to hit the United States during this active hurricane season when it strikes the Gulf Coast this weekend. The National Weather Service has issued hurricane warnings for parts of the northern Gulf Coast as the storm steadily advances on the area. The storm could make landfall as a hurricane on Saturday night, potentially bringing the threat for wind damage, flooding rains, and a storm surge along the coast.

Nate is struggling a bit this afternoon after its day-long encounter with Central America. The storm was relatively weak when reached the shores of Nicaragua and Honduras on Thursday, and its interaction with land only worsened it’s already-shaggy appearance. But weak winds and a disorganized structure don’t make the storm any less dangerous. The tropical beast killed nearly two-dozen people after heavy rains caused extensive flooding across the region’s mountainous terrain.

The tropical storm has since reemerged over the western Caribbean Sea and is now moving at a decent clip toward the Gulf of Mexico. But as it does so, Nate may not gain as much strength as it potentially could as it appears the thunderstorms surrounding its center are becoming more disorderly and unorganized. A storm needs thunderstorms to organize into a compact eyewall to gain significant strength. The good news is that, because of this, the storm will be slow to gain stamina the longer it stays messy and sprawled-out like it has this past afternoon. The bad news, however, is that the National Hurricane Center still expects Nate to approach the northern Gulf Coast on Saturday night as a hurricane. The Center says conditions still appear favorable enough for the storm to gain momentum, despite it’s current struggles.

Forecasters currently expect Nate to grow into a category one hurricane through landfall on Saturday night. Hurricane warnings are in effect from southeastern Louisiana through southern Alabama, including the cities of Biloxi, Gulfport, and Mobile. The New Orleans metro area is under a tropical storm warning. A warning means that dangerous weather conditions are expected within the next 36 hours.

Nate will pose all of the hazards you’d expect when a tropical cyclone makes landfall. Heavy rain and localized flooding is a concern across much of the eastern-third of the country as Nate’s remnants quickly travel up to the northeast. Several inches of rain are possible along Nate’s track through early next week. The Weather Prediction Center expects that some areas of the southeast could see more than five inches of rain from Nate. The heaviest of which will likely cause localized flooding issues. However, because the storm is expected to move quickly, that will limit the amount of time heavy rain can linger over a particular area.

Flooding is a particular concern for New Orleans, a city that struggles with water management due to its elevation being below sea level. Heavy rain earlier this summer led to flash flooding across the city that was exacerbated by failures in the pump system that drains excess water away from the city. New Orleans Mayor Mitch Landrieu announced in a press conference on Thursday that the city’s pumps are now operating at 92 percent capacity, but that Nate’s speedy forward motion and lower rainfall totals over eastern Louisiana should ease the flooding danger in the city. However, a westward change in track could raise the flood threat in and around New Orleans, making it a good idea to prepare for flooding regardless of current forecasts for those who live in the area.

Wind damage is a concern even in relatively weak storms. Several hours of sustained tropical storm and hurricane-force winds will cause tree and electrical line damage, potentially blocking roads and knocking out power for several days in the hardest-hit areas. Flying debris is likely during the height of the storm, and isolated tornadoes are also possible on the eastern side of the storm as it comes inland.

Strong winds will also push a life-threatening storm surge into the coast as Nate comes ashore. The storm surge, which is seawater pushed inland by strong and persistent winds, should be nowhere near as devastating as previous historic hurricanes, but even a small one is dangerous for folks right along the coast. According to current forecasts, a storm surge of four to seven feet above ground level is possible from Morgan City, Louisiana, to the Alabama and Florida state line, including the entire Mississippi coast and Mobile Bay. The deepest storm surge will occur on barrier islands and in bays and concave-shaped coastlines. The highest water will coincide with the strongest winds on the eastern side of the storm.

If you’re in the path of what could become Hurricane Nate, it’s important to take the storm seriously and take all necessary precautions, despite the likelihood that it will not develop into a catastrophic one similar to what we’ve seen this year. Power outages are a serious inconvenience that can become a problem sooner than you’d expect. Make sure you have ready-to-eat food, beverages, and batteries to power flashlights and charge up your mobile devices. It’s also a good idea to fill up your gas tank and take out some cash if you can as ATMs and card swipes won’t work without electricity or communications.