Debate: Who Was The Best Star Trek Medical Officer?

With the imminent release of Star Trek: Beyond on Friday, it’s Star Trek week here at Popular Science. In addition to coverage about the movie, upcoming television series, and in general all things Trek-related, our staff is lifting the veil on one of our nerdiest moments yet. Photo Director Thomas Payne, Social Media Editor Jason Lederman, and Assistant Editor Sarah Fecht, along with contributing writers Kelsey D. Atherton and Mary Beth Griggs–all Trekkies–sat down to hash out the best of the best rankings in Starfleet.

With part two, we present the transcript of our discussion over the best medical officer in Starfleet history.

Sarah: Bones. He’s so cynical–you’ve got to love him.

Thom: I love Bones. I thought Bashir was interesting, too, once they started fleshing out what he was about. Because he’s also, when you think about it, he’s supposed to be sort of like a Muslim character right? Which is cool because you didn’t see a lot of the main characters as fully formed beings. I liked his friendship with O’Brien too.

Mary Beth: Okay, best bromance? Well no, I think I’m going to argue against myself: I think that O’Brien and Bashir is one of the best, but then there’s also…

Thom: Or Spock and Kirk.

Jason: Or Scotty and Kirk.

Mary Beth: Just anybody and Kirk.

Sarah: Well he’d probably get it on with all of those things anyway so…

Thom: So who was your favorite doctor then, Jason?

Jason: I think it’s the Doctor. He, more than almost any character in the Star Trek universe, gets to grow over the course of his series. Even becoming the Emergency Command Hologram which is super cool. He gets to deal with all of these unknown diseases in the Delta Quadrant.

Thom: He’s definitely one of the most interesting characters on the show. He’s probably my favorite.

Jason: As much flack as I’ll give Enterprise, Phlox is super cool cause he’s the only doctor who’s an alien. Also he’s really into these home remedies. Which is kind of funny. They’re like, “This is an incurable disease,” and he’s like, “I have some worms that will treat that.”

Thom: In his Medical Bay he had live creatures.

Jason: Yeah exactly. He used a lot of these things that he had picked up on alien worlds that not only is the crew of the NX-01 not introduced to, but we as Star Trek fans are not introduced to at all in any series. They are just like weird fucking things. He’s like, “Yes I picked this up on planet blah blah blah. It’s the Velourian Vampire Bat and they only drink the blood of their enemies.”

Kelsey: I think McCoy, I’ve got to go for McCoy. Always deeply skeptical of every decision and everything about the environment. Cause I think, if you’re going to go where no one’s gone before you should still think, “This doesn’t make any sense at all and I’m going to have to patch someone up afterwards.”

Sarah: I’m with you there, McCoy is my favorite. Bashir is my second favorite, just because he cares so much. Like McCoy cares too, but he’s primarily just a grump. Whereas Bashir is more optimistic and caring, and that’s the way you would want a doctor to be if he were your own doctor.

Mary Beth: Yeah, but I think Bashir’s problem is he’s got a hero complex.

Thom: Where Bashir starts off as a character at the beginning of seasons, and where he ends up, there is a huge arc in between. Like when they get captured by the Jem Hadar and he kind of gets taken down a notch. He’s a totally different character after that. Crusher kind of stays Crusher. 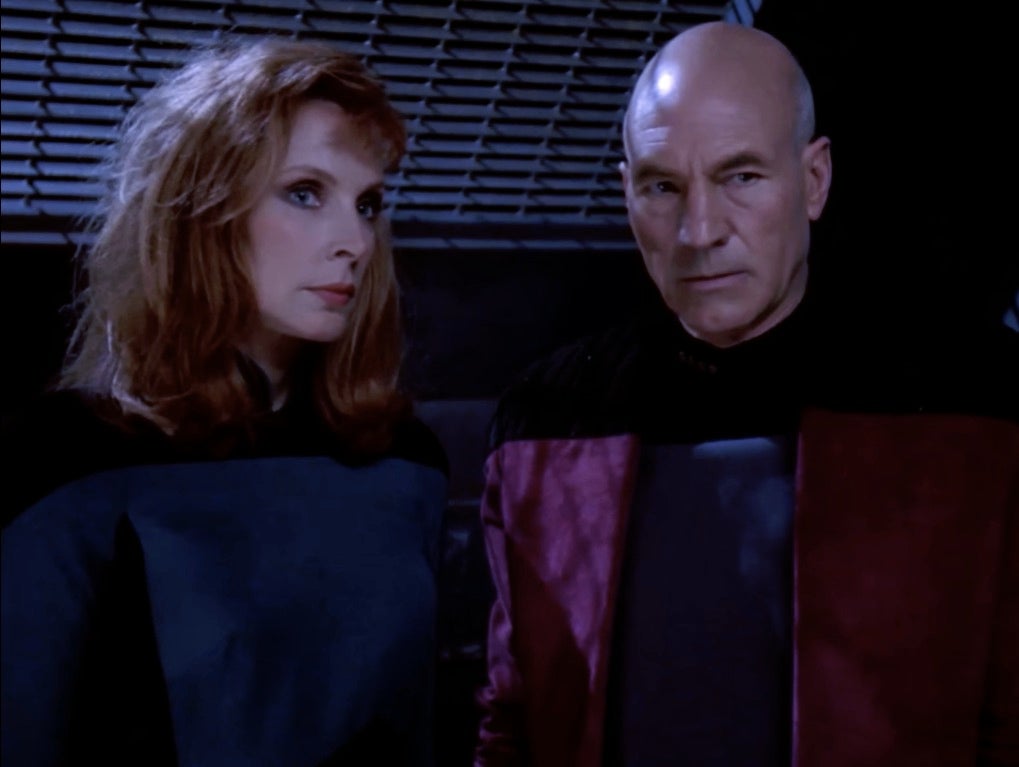 Mary Beth: Crusher is Crusher. But I think if I was choosing a personal physician based on the doctors in the Star Trek show, I would go with Crusher. She’s got easily the best bedside manner and everything. I think that if I was in space, though, I might go with the Doctor. All of the medical knowledge is just in his head.

Thom: He just has no bedside manner at all.

Sarah: He’s not a doctor, he’s a program.

Thom: And then Crusher uses him in what, First Contact?

Thom: She’s like, “I swear to god I would never use this,” and then she activates the emergency medical kit and you got both together in one scene, which hardly ever happens. … But I do love Bashir, so if we’re taking a tally, I’d say again I guess my favorite’s Bashir. But I love them all.

Sarah: So we have two for McCoy, two for the Doctor and one for Bashir?

Mary Beth: With the caveat I think that I would chose Crusher as my regular doctor.

Jason: I would chose Crusher as my doctor but I think the best Doctor in any Star Trek series is the Doctor.

Sarah: Thom you get to be the tie-breaker I think.

Thom: Oh between those two? I’ll go with McCoy.

Writer’s note: Not to editorialize too much, but McCoy had this one wrapped up ages ago. The Doctor never had his cynicism; Bashir never competed with his bromance. McCoy had impeccable fashion sense and never gave birth to Wesley Crusher. Case closed.