Debate: Who Was The Best First Officer In Star Trek? 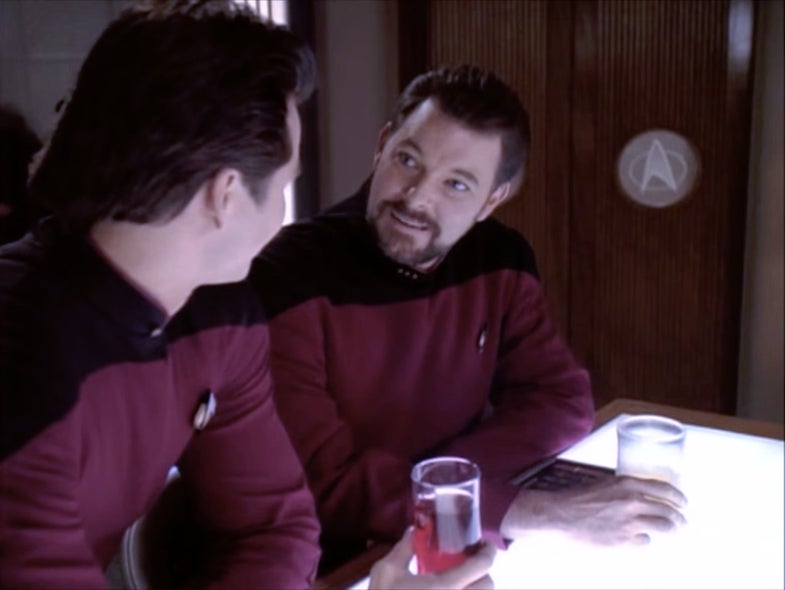 With the release of Star Trek: Beyond on Friday, it’s Star Trek week here at Popular Science. One of the ways our staff is celebrating is by lifting the veil on one of our nerdiest moments yet. Photo Director Thomas Payne, Social Media Editor Jason Lederman, and Assistant Editor Sarah Fecht, along with contributing writers Kelsey D. Atherton and Mary Beth Griggs–all Trekkies–sat down to hash out the best of the best rankings in Starfleet.

With part four, we present our discussion over the best first officer in Starfleet history.

(Editor’s Note: Author was not present for debate, and has included his own thoughts and opinions in brackets.)

Jason: I have to go with Riker for first officer. [Well that was easy. Off to a good start here, team.]

Sarah: Yeah I’m with you there. [See? all getting along…]

Thom: He’s just too classic. [What does that even mean?!]

Sarah: I love Spock, but say your captain has beamed down to the surface and he’s in trouble. Who do you want running your ship after that? I want Riker. Not Spock. Even though I love Spock. [See right there, this discussion should be over.]

Kelsey: He’s just very impulsive and reckless. There are times where Picard is on the planet and Riker’s managing the ship and he will do the reckless thing to save Picard other than the right thing. It works because it has to for plot reasons, but there’s no situation where I want the guy who does the bold and daring move every time.

Jason: The dynamic between Kirk and Spock and Picard and Riker is almost identical, but their roles are flip flopped. I’d much rather have the aggressive guy as my first officer, with the captain being able to put him in check and evaluate the risks. Rather than having the guy who’s like, “Maybe this isn’t a good idea” in second place while the guy in charge is like, “Fuck it let’s go!”

Thom: And then first officers in the other ones would have been what, Nerys?

Jason: He was the leading of the rebel crew in Voyager, but very quickly adapts and is like, “We have to look out for the whole ship not just the Maquis.”

Mary Beth: Actually now that we’re talking about it, I see we’ve got polar opposites with Spock and Riker. I wouldn’t want Riker. It is this idea that if the captain dies, then this is the guy that’s stepping up. I agree with Kelsey, I think Riker is impulsive.

Sarah: I think it’s good that he’s a risk-taker. I think Spock would be too careful. And he would leave you behind if he had to.

Mary Beth: It’s true, and so if we’re doing that though, I guess I’m almost interested in Chakotay. He seems like he’s a mix of the two. Because he’s very logical, he’s very calm, he’s kind of calming influence…

Jason: But he’s not afraid to take the risk.

Mary Beth: No, yeah, he was leading a rebel ship for a long time and he had the experience.

Jason: So the other thing though is that Riker starts off much younger and gets to grow with this experience. Spock is already over 100 years old. [A character that grows is always superior.]

(Editor’s Note: Lederman was wrong. When Kirk takes command of the Enterprise, Spock is 35 years old.)

Thom: He gets a crazy brother, too, in that transport malfunction…

Jason: Yo! Spock is not changing. Riker can grow and is learning from those experiences.

Thom: And he got more facial hair as he went on. [And there’s the beard card. Game over.]

Jason: Yeah, he achieves beard and Spock does not.

Thom: Like Riker from the “Best of Both Worlds” episodes and after that.

Mary Beth: Once he achieves beard.

Thom: And that awesome episode Pegasus, where he has to go back…

Thom: It’s a great Riker-centric episode… So where are we at first officer?

Thom: I want Riker but just because Spock’s iconic, I go with Spock. [Oh come on!]

Mary Beth: I’m going to be with Spock too then.

Thom: It’s hard to choose. I want them all at my party. I don’t want to not chose one of them, they’re all welcome.

Here we go again, complicating things. We were so close to a total Riker victory. My vote, in case you didn’t figure it out, goes to Riker. I think the important takeaway from this debate is that there’s just a lot more going on with Riker by the end of his series than there was with Spock. Some people liked that, some people didn’t, but it was hard to argue that Riker wasn’t the most developed first officer. He changed, he fell in love, he grew a pretty awesome beard.

With that said, the votes decidedly put this one in favor of Mr. Spock. And while Riker may have been an impressively complex and well-written character in the Star Trek universe, Spock is an iconic science fiction character in his own right. You don’t see people walking around conventions with Riker ears on, do you? And most of the beards are patchy.