The weirdest things we learned this week: wild weather, Victorian cannibalism, and the female orgasm (as told by a 12th-century nun) 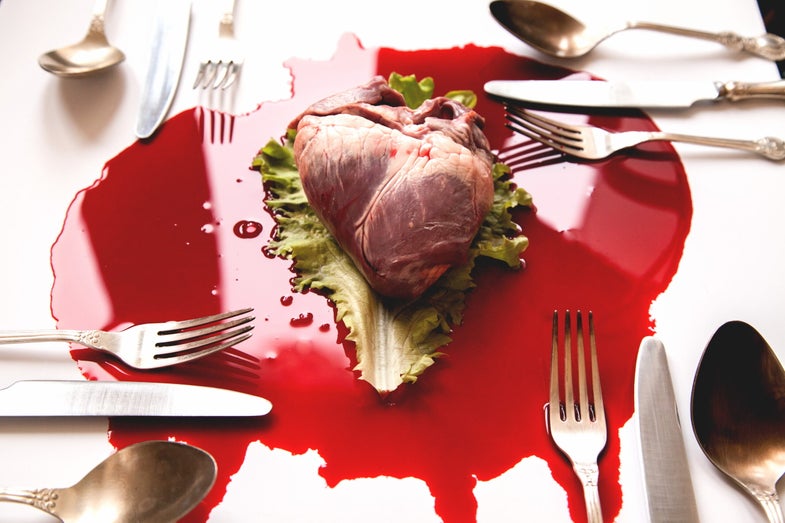 By and large, humans eating humans is frowned upon. But from the Middle Ages to the Victorian period, Europeans ate parts of other people. A lot. Medical cannibalism was the fairly-common practice of consuming human fat, blood, and (in Victorian England specifically) mummies to cure sickness and fortify their corporeal forms. Fat and blood pudding were widely considered panaceas. But any body part—especially if the corpse was newly dead and, therefore, more likely to contain “vital spirits”—was fair game.

The practice peaked in sometime in the 1600s, which is when King Charles II was drinking “the King’s drops,” a mix of human skull and alcohol. But interest in buying medical cannibalism products continued into the Victorian era which is, well, not that long ago. And some modern-day billionaires still kind of want your young, healthy blood. We might not use human fat in routine painkillers any more, but some things (gruesomely) never change.

My fact-finding mission this week began with inspiration from a new piece of music composed by J.L Marlor. So let’s start with that:

My sister Chelsea Feltman (who performs the piece above) commissioned it after falling in love with a letter by astronomer Caroline Herschel. She was a talented astronomer who lived in her brother’s shadow, as so many women did until recent years. She reflects on the forgotten women of science in her letter.

One of the forgotten heroes she references caught my eye: Herschel claims that Hildegard of Bingen, a German nun born at the turn of the 12th century, suggested a heliocentric solar system hundreds of years before Nicolaus Copernicus got credit for it. I’d heard about Hildegard before—she experienced so-called visions now thought to be migraines, and produced countless works of exquisite music, along with writings on medicine and astronomy—but this factoid was new to me. Was it true?

The answer is… well, probably not. But it’s hard to say. You’ll have to listen to the podcast to hear more, but you can read more about the text I reference (the stuff that could maybe possibly be about heliocentrism and/or universal gravitation) here.

Hildegard had such a wild life that I had to leave a few facts on the cutting room floor. My favorites: Once she’d taken over as magistra of her monastery, Hildegard told the Abott she’d received a vision telling her to pack up all the nuns and move to Rupertsberg. When he refused, she took ill and was unable to move—no matter what anyone tried—which she said was a sign from god. The abbot himself tried and failed to wrench her out of bed, at which point he relented and let the nuns move out. This wiley spirit didn’t leave her as she aged. In her 80s, she defied the pope by burying an excommunicated friend (who she said had repented before death) in the Rupertsberg cemetery. When the pope told her she had to disinter the friend, she instead removed all markings from the grave in order to hide it. She then petitioned until the pope changed his mind, and died not long after.

While Hildegard’s astronomical writings are the subject of debate, she’s also known for making impressive conclusions in medicine. She seems to have had some idea that boiling water could prevent disease, and she also appears to be one of the first people to connect syphilis to its sexual transmission. And of course, as we explain in the podcast, she provided a remarkably thorough description of a female orgasm.

Fact: A family in South Carolina has been recording the weather every day since 1893 on behalf of the federal government

One of my favorite things about being a science writer is that you get to interact with people who are just so passionate about their field of study. I know that sounds simple, but it’s such a joy to talk to people who love what they do, especially if it’s something that most people find boring. I think the climate is one of those things. The folks at the National Oceanic and Atmospheric Administration (NOAA) who spend their time tracking and analyzing climate data are crucial to our understanding of how the planet is changing. Someone has to be responsible for that process, and those someones also happen to run a fabulous blog called Beyond the Data. It’s literally just interesting things they stumble across in their research or find intriguing. I’m an avid reader.

Anyway, that’s how I found this week’s fact, which isn’t so much weird as it is heartwarming. There was a blog post about how Thomas Jefferson and the telegraph helped create a system of weather stations now known as COOP. I already knew about the COOP system, but I hadn’t fully appreciated how much of our climate data—dating back all the way to the early- to mid-1800s—gets recorded by volunteers. COOP stations have basic measuring equipment that allows the volunteers to record temperature, precipitation, pressure, and so on, which they do every day. Even back in 1895, there were at least 2,000 people running COOP stations all over the U.S., including in areas that weren’t officially states yet.

Some of those volunteers passed down the responsibility of running the station to their children or nieces or nephews, with the result that there are a handful of families that have been recording the weather on behalf of the federal government for 125 years. And it’s only because of them that we have such a thorough record of how every part of our country has changed climatologically. All hail the volunteers!

Got a weird fact you’d like to share with us? Check out The Weirdest Thing on Facebook. And as always, we’d be ever so grateful if you’d subscribe, rate, and review us on iTunes. Stay weird!