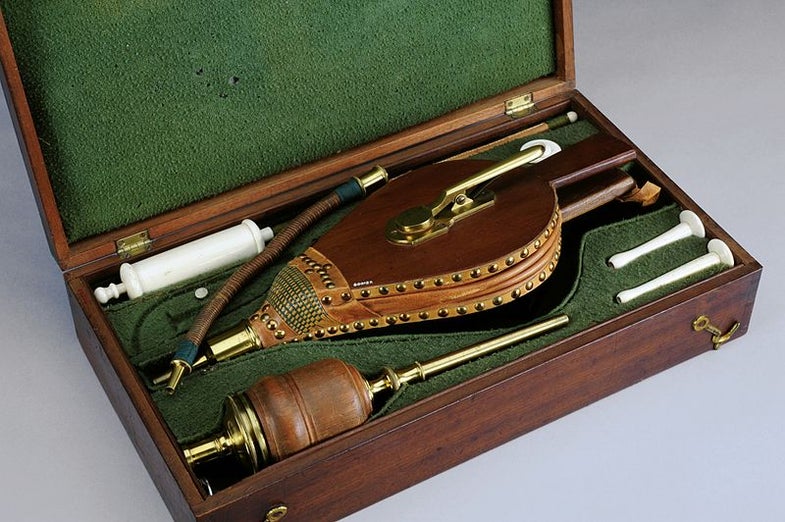 The bellows could be adapted to inflate the lungs with fresh air or to introduce more stimulating vapors such as tobacco in an attempt to revive the patient. The set includes a small ivory syringe with a flexible leather tube to inject stimulants into the stomach. It also contains nozzles, small circular discs for the nostrils and, for the rectum, the long ivory tubes at the front of the set. Wellcome Images
SHARE

Until the 1700s, Western doctors didn’t generally try to revive patients who seemed to be dead. Drowning victims, for example, were out of luck if someone happened to pull them out of the water before they were quite thoroughly deceased: Touching an unknown body was taboo, given that it might be the corpse of a criminal or someone who’d committed suicide, and in many places a failed effort to resuscitate someone on your property could leave you liable to pay for their funeral. Mouth-to-mouth had some proponents in the medical world, but it was considered vulgar.

Enter London’s Society for the Recovery of Persons Apparently Drowned (which is now the Royal Humane Society), a group that paid big bucks to folks with proof that they’d successfully implemented one of the premiere resuscitation methods of the day. And yes, one of those methods was a smoke enema: The idea was to warm and stimulate the body, and perhaps gently encourage the lungs to fill, by blowing tobacco smoke down someone’s throat or up their rear end.

You could improvise with a pipe (which was not a great idea in general, but was especially problematic in treating cholera patients—another popular use for tobacco enemas, according to medical literature), but a setup with bellows and various attachment was more professional. In fact, the aforementioned society had kits with this setup—pictured at the top of this article—placed around waterways like the Thames. They allegedly worked a few times.

Tobacco fell out of fashion (at least as a medical treatment) in 1811, when English scientist Ben Brodie confirmed that nicotine caused harm to the cardiovascular system. Why we kept smoking it for fun is a great question.

The history of resuscitation turned up a few other interesting nuggets. For starters, there were other intriguing (and stupid) methods. One involved flopping a patient over a barrel and rolling it back and forth:

This was kind of a precursor to CPR, but it also meant banging a patient’s head around while you tried to revive them. Not ideal!

Speaking of less-than-ideal resuscitation efforts, you can listen to the podcast to hear the thrilling saga of Anne Greene, a woman hanged in 1650 but revived some hours later. Doctors were thorough in their notes about this strange occurrence, so papers on the incident provide an amazing window into medical practices of the day.

Fact: The products you use rely on sneaky sound design to manipulate your emotions

I didn’t think an academic paper with the title “The psychology of condiments” would lead me to a fact about Clinique mascara, but yet again the world of marketing psychology has surprised me. This week my fact was about how many prototypes Clinique made for one of their luxury mascaras—not of the mascara itself or even of the brush, but of the cap mechanism. (And by the way, shoutout to this 2012 Wall Street Journal article by Ellen Byron for many of the facts I shared this week).

They wanted their mascara to sound high quality, and it turns out humans associate deeper sounds with a more luxurious product. Even though it changed nothing about the actual quality of the mascara, changing the slope of the twist-top cap to produce a soft, low click apparently gave the impression of quality.

The same is true of lighters, whose caps can be designed to make a more pleasing clicking tone, and of apparently every other product that you buy.

Of course, it also goes the other way: Sometimes companies get sounds wrong and wreck an otherwise perfect product. Just look at SunChips. They attempted to roll out a new, compostable bag that was eco-friendly, visually pleasing, and also made one of the most obnoxious crinkling noises I’ve ever heard. It seemed preposterously loud:

People hated the sound so much, SunChips had to discontinue the new packaging almost immediately.

If product designers are doing it right, though, you shouldn’t even be consciously aware of all the fine-tuning that happened before something hit the shelves. In fact, as the researchers of that condiment paper point out, the color of the Heinz baked beans can was designed to mesh well with the color of the beans themselves. Data shows that if you like the look of the packaging, you often think the product tastes better. This is why high-end, artisanal product companies invest so much in their packaging. And incidentally, even though Heinz is the most popular brand of ketchup by far, in blind taste tests it often ranks near the bottom. A study like that would lead many to believe that Heinz simply isn’t worth it. If it doesn’t really taste the best, why buy it? But the author of the paper pointed out something I hadn’t considered before: if the Heinz packaging makes you perceive it as better-tasting than it “really” is, what does it matter? It still tastes better.

Fact: In 1957, a volcanic eruption left a lighthouse stranded away from the sea

I was on vacation the week before we recorded this podcast, so the weirdest thing I learned this week was more like the weirdest thing I saw last week. I was in the Azores, a small archipelago of islands in the Atlantic featuring wild, stunning landscapes unmistakably shaped by volcanic eruptions.

In 1957, a billowing cloud emerged from the waves near the coast of Faial, one of the nine major islands in the Azores. The mixture of steam, gas, and small rock particles originated from an underwater eruption just off the coast, near a lighthouse. That eruption lasted 13 months resulting in ash buried houses, agricultural fields, and the first floor of that poor lighthouse. In the process, it created over a square mile of new land and effectively moved the coast.

Wind and waves eventually re-claimed most of that new land, but about 20 percent of it is still visible, along with the lighthouse, which is now part of a interpretation center at the site and sits decidedly inland. The eruption re-shaped the island in more ways than one, also changing the demographics of the island, and of parts of the United States. Thanks to legislation pushed through by a very famous senator (listen to the podcast to hear who it was) thousands of refugees from the island emigrated to New England.

As a bonus, I briefly talk about what was essentially my runner up for the weirdest thing I saw last week—the inside of lava tubes. Formed by lava flowing downslope, many islands in the Azores are strewn with them. Inside the ones that I visited, the floor is (cooled) lava, and the walls are coated with still-unidentified bacterial growths that glitter like silver or gold in the light of a headlamp, like something straight out of Annihilation. In short: volcanoes, they’re pretty awesome.