Who Was The Best Non-Human Character In Star Trek?

Cardassians and Klingons and androids, oh my! 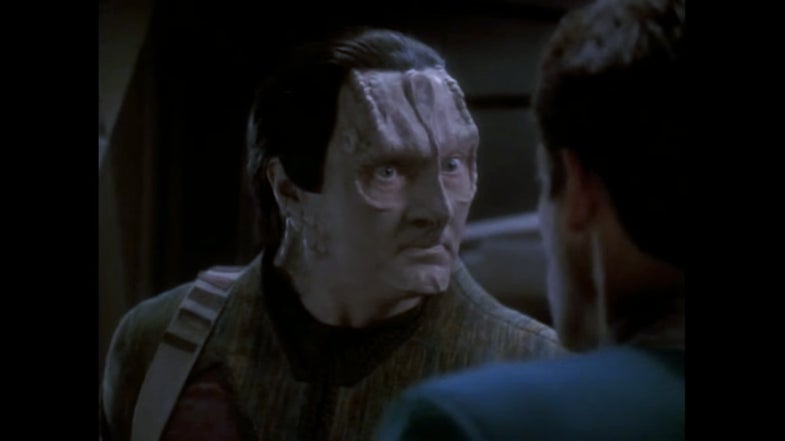 With the imminent release of Star Trek: Beyond on Friday, it’s Star Trek week here at Popular Science. One of the ways our staff is celebrating is by lifting the veil on one of our nerdiest moments yet. Photo Director Thomas Payne, Social Media Editor Jason Lederman, and Assistant Editor Sarah Fecht, along with contributing writers Kelsey D. Atherton and Mary Beth Griggs–all Trekkies–sat down to hash out the best of the best rankings in Starfleet.

With part three, we present the transcript of our discussion over the best non-human character in Starfleet history.

Sarah: Garak. Garak is so good.

Mary Beth: I hadn’t even thought of that.

Thom: Garak is one of my favorites.

Thom: By the end of that series he was fully in their camp. Once Gul Dukat’s daughter was killed and all that stuff, he became a much more sympathetic character.

Thom: If we’re doing nonhuman regular, then my favorite character is Worf.

Mary Beth: Justify that. [Writer’s note: he should not have to justify that: Worf is amazing. We don’t talk about his role in the films, but did you see First Contact? He’s basically a one-Klingon Borg destruction force.]

Thom: I’m fascinated by Klingons and how they kind of fleshed out that bushido/samurai kind of thing with him. I just really gravitated toward it when I was a kid.

Sarah: See I like bushido, but Worf just constantly wants to kill things. It’s just against the nature of Starfleet. The way I think of it, at least.

Jason: Because he’s a Klingon!

Thom: The one where he gets stuck in multiple timelines where he keeps getting—

Jason: —that’s such a good episode. [This is where it gets really nerdy.]

Mary Beth: Kelsey what do you think?

Kelsey: I’m a Worf fan. He makes bad decisions but he does it with such gusto. It’s very important to have the person who is charging into battle not be the captain. Worf is a hawk right? He’s always arguing that angle and Picard’s like, “Wait let’s try talking about things,” and then it works out.

Jason: I love Data. He is fascinating. He is a machine who wants to be human. As he grows and gets to understand things, and gets the emotion chip and gets to experience all of these things, it’s like watching a child grow up–but a child who has better skills and knowledge than any human.

Mary Beth: I’m going out there–you got me on Garak because that is super good–but Odo.

Mary Beth: He’s isolated from his people, he doesn’t know who they are, he thinks he’s the only one–kind of like Data. This idea, “I’m the only one of my kind.” And he can shape-shift, that’s awesome.

Thom: I always like that episode where he got stuck being a human and then he gets the powers again and the first thing he decides to do is turn into a bird and fly. I was like, “Dude, if I had that power, that’s the first thing I would do too.” And he had the tragic love story with Nerys.

Sarah: If we’re talking favorite non-human species, I’m kind of a big fan of the Trill. They have a symbiont inside of them, so they’re sort of like two people in one. So you’ve got one of the organisms that has multiple lifetimes of knowledge, and the host is also still kind of its own person, but with all the memories of all these other people. It’s a really interesting biological case that’s grounded in science. If there are aliens, maybe there actually would be something like that.

Thom: I always wanted them to flesh out that whole society more for me, like how it all works, because not everyone who is a Trill got to be a symbiont.

Mary Beth: That was very political too.

Thom: I liked how the Andorians were portrayed in Enterprise.

Mary Beth: Andorians. They’re awesome. The guys with the antennas.

Sarah: Kelsey did you have a favorite?

Kelsey: I think Data is fascinating, and of the things that are living, I just, Spock, for setting the tone, is tremendous. [We ruled out Spock for this category, for reasons that will be revealed in Part 4 of this series.]

Sarah: So that’s two for Data, and I’m for Garak.

Mary Beth: Garak. You got me on that.

Sarah: We need a tie breaker.

Thom: I’ll either go with Garak or Worf. If we need a tie breaker I’ll do Garak.

With an initial lean toward Data, and a final split between Garak and Data, I’m left to declare a tie, with a caveat. Garak as a character is arguably a reflection of the success of Worf: a Starfleet character from the species of a former major villain empire. Data, while not really an alien, is a sort of a descendant of Spock–an observer of the human experience who points out curious behaviors in clever ways.

Worf (who was my favorite in this debate) was a major change for the series: a character whose personality, past, and cultural history were a major change from what the series had delivered before. He was the first Klingon hero of Star Trek, and a good one at that. He balanced out Picard’s level-headedness with some of Kirk’s old gusto, in a package that could also double as comic relief.

That said, like Thom I can’t cast my vote for Worf and win the numbers game. We all had a little trouble with this one. Maybe the best thing about Star Trek is just how many diverse characters there are and have always been.

Of course, if you call that a cop out, I’m going to fudge the numbers and give this to Worf. He’d have wanted me to go down fighting.