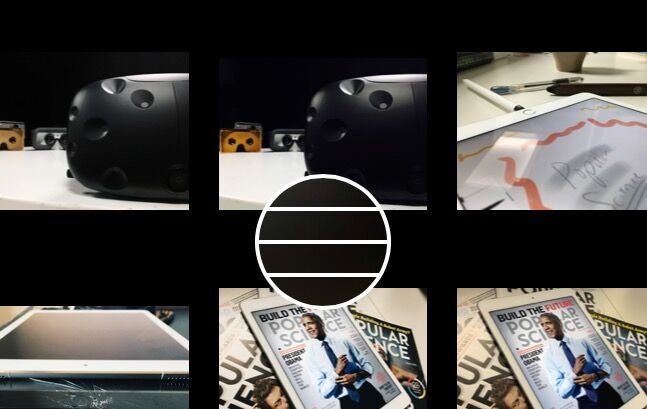 The VSCO Cam app for iOS and Android has long been a way to give your photos a film-like look. The photo editor not only allows for eye-catching photography, but peak Instagram likes after posting to social. Now the company is more heavily touting its own social features in the app’s latest update.

Following the app’s first visual revamp—adding more black and white and additional navigation gestures—the Visual Supply Company’s update to VSCO Cam on iPhone and Google devices throws in additional design changes. Introduced in the app’s June update is a virtual toggle (the white circle in the bottom center with three lines in the middle). Swiping it left brings you to your profile, to the right brings you to updates to collections you follow, and swiping the toggle up launches the camera.

But just as notable as the visual changes and are the social options included in this update. Much of what VSCO is offering in this latest update—your own VSCO profile, following collections, saving photos and more—were a part of the prior VSCO Cam app as well. Instead of burying these social features, VSCO now makes them much more prominent: putting your profile and timeline-like view in the main two sections of the app. In addition to viewing collections in the left-most pane, a button in the top-right allows users to view their VSCO notifications.

VSCO’s smartphone app isn’t the only social-viewer out there. The popular photo-sharing app Instagram also recently saw an app update with a beautiful user interface and a horrific app icon. While the Facebook-owned Instagram has taken a few notes from VSCO and added filters over the years and a black-and-white interface with their latest update, VSCO’s update offers limited similarities to Instagram. While sharing pictures can be done in VSCO, liking, commenting or tagging a friend in a photo won’t be a part of the experience. Some may miss the omission while others will prefer VSCO to remain strictly about the photos.

Numerous features that were included in the old VSCO experience, such as importing and editing photos, have made a return. As have the cryptic menu icons: manual camera options are available in the camera but are represented by shapes and letters. The focus and exposure can thankfully be controlled separately, but only after the first time you happen to put two fingers on the viewfinder screen.

Fans of the company’s gif app DSCO won’t find any cross-app features. Though the moving images will still show up on your profile when uploaded. We may see the company’s new toggle user experience design make its way to the gif-filtering phone app.

VSCO Cam’s latest app update brings interesting design changes to the camera app and broader social capabilities. The app continues to offer great functionality in a minimalistic package. VSCO’s simplicity, however, is almost too simple, as the minimal look steepens the learning curve for the app’s more pro features. But at least it isn’t as bad as the new Instagram logo.