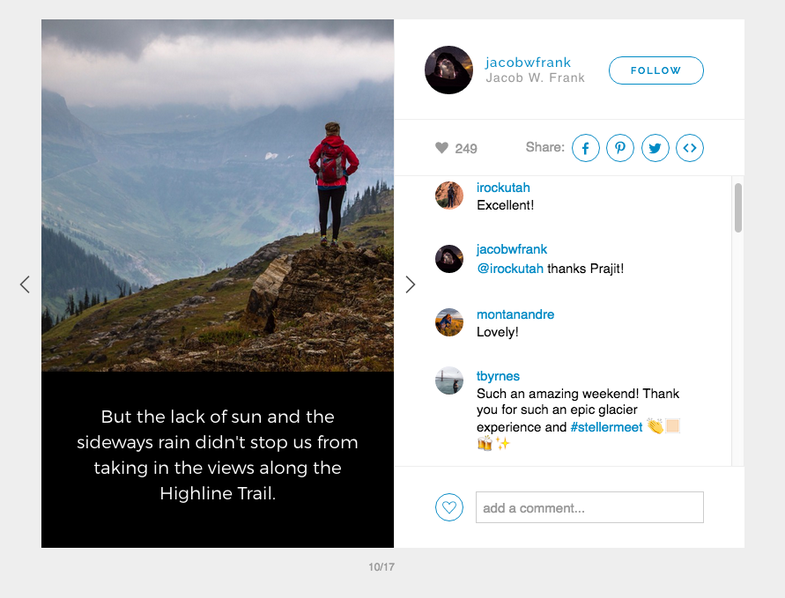 Sometime after midnight in late August, Lake McDonald was a mirror for columns of light dancing across the distant peaks of Glacier National Park. “Looks like someone’s having a rock concert behind the mountains,” Ranger Jacob Frank commented, bent over his camera’s display. A visual information specialist with Glacier National Park, Frank beckoned us over to show the aurora borealis captured in a wash of chartreuse and purple.

We were half a dozen strangers in Glacier for a Stellermeet—a gathering of the photography-inclined sponsored by a startup called Steller Stories. Unlike Instagram, the popular image sharing app of the moment, Steller’s multimedia templates are taking the idea of longform to social media. Users create look-books by combining photos, videos, and text in tailored layouts.

The app has become popular among food bloggers, photojournalists, and even extreme athletes because of its sleek story design—actor Jared Leto is one of Steller’s early adopters, and recently published a viral story about climbing in Yosemite with legendary free-climber Alex Honnold. Major outdoor retailers Backcountry.com and Eddie Bauer are using Steller to narrate their athletes’ adventures and at the same time share stories around their brand identity and their products. But Steller isn’t just about driving clicks—the company’s trying to unite an online community in the real world.

In a social media era that has been defined by avatars and virtual communities like Facebook—which often lead to feelings of depression and alienation—Steller sees itself as a facilitator of real world communities based around common interests. Stellermeets are gatherings organized by users in their communities, and Steller has supported a few of them by promoting and attending the events. The Stellermeet in Glacier that I attended was part of this effort; one of fifteen gatherings sponsored by Steller in 2015 that included several national parks as well as art and architecture walks in Chicago, New York, and Vienna. Most of this year’s Stellermeets were organized independently by users, however, and Steller hopes the community will continue to use the platform to launch pop-up restaurants, songwriting jams, skate sessions—anything at its best in a group.

Founded in 2014 by Woodside, California based Mombo Labs, Steller is the brainchild of Google and Microsoft alumni. Steller’s top users have as many as 20,000 followers, but the growth rate is still privately held and Steller declined to declare how many users it currently has when Popular Science asked. The company is privately-funded and is not currently generating revenue.

In Glacier, I met Tricia Byrnes, a former pro-snowboarder and Olympian who now works for Steller. Like Apple, Steller limits users’ ability to customize their products. “It’s fun to come up with a million designs,” Byrnes says, “but it’s nice to know that whatever you choose is going to look beautiful, whether or not you have a design background.”

Byrnes says the company sees promise in e-commerce, with a range of vendors from major outdoor brands to Etsy makers using Steller to create catalogues that allow click-through purchases (users can click links within the Steller app which take them to the brand’s website). A widget already allows users to create a newsletter for email distribution, and the app can be integrated into existing websites. In the future, Steller hopes to create geolocation functions that would push stories to your phone based on where you are (or want to be) and what you are doing (or want to be doing). For now, the primary focuses are adding iPad and Android platforms. It’s currently iPhone only—although you can browse, like, and comment on the website.

“We’ve been thrilled to sit back and watch people run with it, and we have our eyes wide open to the possibilities,” Byrnes said. “We’ll be looking to our users and their communities to determine where it will go from here.”

More stories from the Stellermeet at Glacier can be seen at Steller Stories by searching the hashtag, #stellerglacier.