You say you hate Instagram’s changes, but your eyeballs say otherwise

It's 2018 and UX designers know us better than we know ourselves. 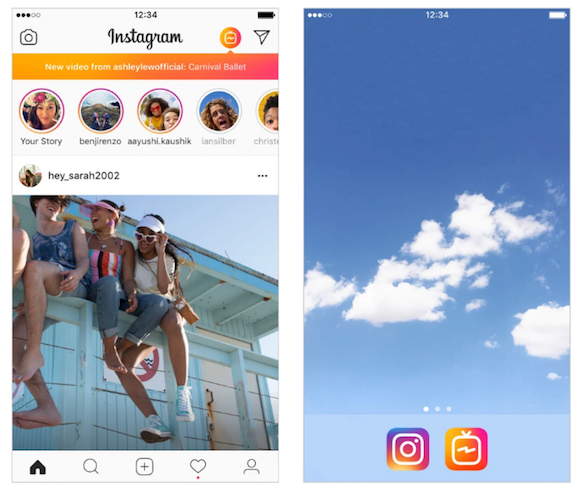 Note: This story was published in June 2018, when Instagram introduced IGTV. We are promoting it again in late December 2018, given the outcry about the app’s latest update, which got rid of vertical scrolling through the feed, replacing it with a tap-through, not unlike the Instagram Stories interface. According to a tweet by the head of Instagram), the update was supposed to be a very small test. By now, users should be experiencing Instagram as they did before.

Instagram co-founder Kevin Systrom has reportedly said the photo-sharing app’s motto is “do one thing and do it well.” For a time, that ethos was clear, and a generation of users came to rely on Instagram as one of the most serene places on your home screen—a self-curated chronological scrapbook with vacation pics, fashion shots, and unlimited foodie content. Where other apps were pushy, busy, and bright, Instagram’s focus didn’t seem to be on engagement; it seemed to be on the edit.

But that’s all changed. In 2018, Instagram is less pastoral playground and more Frankensteined fun house, chock-a-block with features. Instead of doing one thing (photo-sharing), it’s increasingly trying to do everything. In 2013, it released a direct messaging function, which dramatically expanded in 2015. That same year, Instagram ditched its signature square crop in equanimous favor of all photo types. In late 2016, it added Stories, a Snapchat-like service that allows vertical images and videos to be uploaded on a timer, disappearing after 24 hours. That same year, it disrupted the much-loved reverse-chronological flow of the feed, shifting to an algorithm that seems to many users to sort content almost at random. Last week, the company unveiled IGTV, which allows users to post longer videos—up to 1 hour in length—to the IGTV service in the app, or to a standalone IGTV app, which many see as a challenge to YouTube’s reign. And as this story was in its draft phase, the app debuted a new new feature—private video chat.

None of this has gone unnoticed, especially among those earlier adopters, who can trace along their own profile the platform’s growth from a few million users making bright orange sea of Kelvin-ed beach shots rimmed in black matte frames to 1 billion users producing historically unprecedented volumes of, well, contemporary art. The technical quality of the content has risen, but for those with a long memory, it seems that somewhere along the way Instagram lost what made it special.

Some blame the introduction of stories (Buzzfeed memorably called the service a “home-wrecker”). Others point their finger at an increased ad load. And still others rage at the death of the reverse-chronological newsfeed. But despite these widely-agreed-upon woes, Instagram appears to be doing better than ever. What gives?

Perhaps the most intriguing explanation for the gap between Instagram’s likability and its usability can be tied to a uniquely 21st century truth: user experience, or UX, designers know us better than we know ourselves.

Nate Bolt is the founder of Ethnio, a user experience research recruiting platform. Before that, he managed UX researchers at Facebook and Instagram. He says Instagram’s success in heavily-criticized services sounds counterintuitive because it is. “Sometimes you build stuff that people love in terms of their behavior, and talk [bad] about constantly,” Bolt says. “It is the most bizarre thing.” In other words, while some claim Instagram’s every step is a misstep, most users continue to like, swipe, and upload. In fact, many appear to be using the app more.

“Self-reported feedback is notoriously hard to rely on,” Bolt says. “Even public sentiment is hard to rely on, when something’s new.” For example, research suggests self-reports are systematically skewed, whether the report is made to your doctor about your health behaviors, or to a media researcher about your time spent playing games. These inconsistencies have many sources, from memories that go fuzzy over time to the seemingly innate human desire to provide socially-acceptable answers to the fact that shifts in emotional states can alter our perception of time.

Public sentiment, meanwhile, is important to the long-term success of any business, but that has to be balanced with the fact that consumers are notoriously averse to change. Remember when Google changed its logo in 2015 from a serif font, which it had used for decades, to a sans serif font? Barely. But at the time, three years and a few trillion Google searches ago, the internet had a complete and utter meltdown over a few curlicues.

User experience researchers are aware of these difficulties, so they bypass knee-jerk reactions in favor of cold, hard behavioral data. Quantitative and qualitative measures, adapted from psychology, medical research, and other scientific domains, help companies like Instagram track success. Surveys and focus groups are still employed, but observational methods are often preferred. Fortunately, high-tech tools make capturing this information easier than ever.

With screen-sharing, UX researchers can watch users navigate a digital product and swiftly identify bottlenecks and surprising uses. And at Bolt’s company, Ethnio, a request pops up on a user’s screen in real time, asking them to participate in a discussion of the service with a trained researcher. By identifying people when they’re in the middle of using a product, the company can gather more critical, real-time feedback from a diverse sets of users. As a result, companies have a better sense of how customers interact with their products than ever before.

Of course, UX design doesn’t exist in a bubble—it’s shaped by the demands of current users, as well as the company’s hopes and dreams for who future users might be.

For that reason, Instagram’s transformation from meditative space to multimedia sandbox could easily be blamed on teens. Increasingly, the app just isn’t designed for those early adopters who fondly recall a quieter time online, but for young people who, after all, are the future. Facebook has essentially bottomed out in that department—in 2015, 71 percent of teens told Pew they used Facebook, compared to just 51 percent three years later. But 72 percent of teens report using Instagram, according to a Pew Research Center report published in May. That means the app is second only in all of social media to YouTube, the horizontal video service used by a whopping 85 percent of teens. Instagram’s brighter, buzzier design and investment in the eerily-YouTube-like IGTV service may be attempts to gain—and, more critically, maintain—such widespread appeal among Gen Z.

Alternatively, Instagram’s aggressive roll-outs could represent a larger shift in focus. Systrom, the company’s co-founder, has long opined about his desires to create something different from other social media apps. There’s that “one thing” motto—and his uncharacteristically dogged efforts to automate deletion of harmful comments. But just because Systrom continues to run Instagram doesn’t mean Facebook’s influence on the app can be discounted. Facebook’s business-minded goals of monetizing our attention, connecting people across multiple Facebook-owned platforms, and using machines to automate processes and even predict behaviors have all reshaped the photo-sharing app. As the stories tool, which offers augmented reality face filters, but few real editing tools compared to the main feed, clearly illustrates, Instagram’s priorities are shifting away from the edit, and into engagement.

For better or worse, pulsating pink orbs; infinite scroll; notifications in pink, orange, and blue; and other clamorous designs do drive engagement. Stories on all of Facebook’s platforms from Instagram to WhatsApp are growing 15 times faster than corresponding newsfeeds. Instagram gained more than 200 million monthly users since September 2017. And the algorithmic feed, while still detested two years after it was introduced, generates more engagement than the reverse-chronological feed did, according to the company. It’s long been said that actions speak louder than words. On Instagram and other data-driven apps, that’s finally true.

As for IGTV, it’s too soon to say what will happen. But the same researchers and designers that gave us every other skepticism-inducing feature in the Instagram suite are confident that vertical longform video is the way to go. While taking on YouTube may seem impossible right now, the odds are good that wherever Instagram leads, our fingers will eventually follow.