Inside one of the year's more forward-thinking album releases 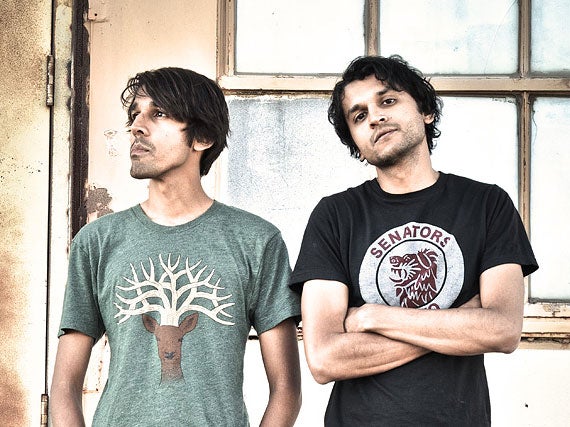 When Neil and Sumul Shah, the brothers behind the wildly creative band Wildlife Control, dropped their debut single, “Analog or Digital” five years ago, the band’s release was at the forefront of both the tech and music spheres. Not only did the video that accompanied the single use HTML5, JavaScript, and the SoundCloud API, but the official video, which came out a few months later, was shot with stop-motion of the brothers on a California beach.

Now both Neil and Sumul are back with their latest, a three-track EP called Particles that takes a similar approach to blending the worlds of tech and pop culture.

“After we finished the Analog and Digital video, we had a cycle where I wanted to do another stop motion project,” says Neil. “But Sumul was blunt. He said said ‘We did it, and it was fun and cool, but if we keep doing it, it’ll be boring.’ We didn’t want to take something experimental and challenging and turn it to work.”

Particles was born out of that conversation, which hoped to harness the emergence of social media and ability to analyze huge amounts of data. At the time, Instagram had just released its new app for making Hyperlapse videos.

So Neil and Shumul used Instagram’s API, and that of Twitter and Twitter Photo (along with a search engine the two built that was Python-based), to look for interesting videos, people, and geographies that would inspire the project that would become Particles.

“We didn’t know if it would turn into anything,” says Sumul. “We’re glad it did.” Neil adds, “We just started going down rabbit holes in 2014, about six months after the Hyperlapse videos began appearing. Some of the videos were not usable or great, but you could go down variety of funnels that way for inspiration.”

The result is Particles, which has three movements — Illusion, Subtract, and Creature. Each on its own is compelling, but when digested together, Wildlife Control’s album is a tailor-made listen for losing oneself. I walked around New York City, where Popular Science is located, and listened to the album a few times, and you sort of feel yourself drift away, the same way one feels when watching back-to-back-to-back really well made social media videos.

“A lot of lyrics are not literal,” says Neil. “It is abstract at times, and we met the lyrics to be a reflection of the ideas within this concept of going through streams of information.”

Wildlife Control also released a 12-minute video to accompany Particles, which matches some of the best hyperlapse video Neil and Sumul had viewed over the course of the album’s research and creation with the three tracks.

“The video and the music always informed each other,” says Sumul. “Our intuition was progressively clarifying as we watched random videos, set to different music, that gave us various feelings, which we tried capture as we wrote the music. And then we would reflect that feeling into the film. It went back and forth as we went from sketch to high and higher levels of fidelity on each [the film and music].”

Neil adds, “Particles broke us out of thinking of music as radio format. Or verse chorus—verse bridge. We were forced to think about music as a reflection of what we were thinking about with this collective shared human experience we had been witnessing.”

Similar to their debut, don’t expect Wildlife Control to keep refining the process, even if they don’t know what their next step is. “Now that we have these scripts, and this search engine, we could make another one a lot easier,” says Sumul. “But i think, for me, I am so drawn to new things, and want to now achieve something different.”