A New App Automatically Sends That Group Photo To Your Friends 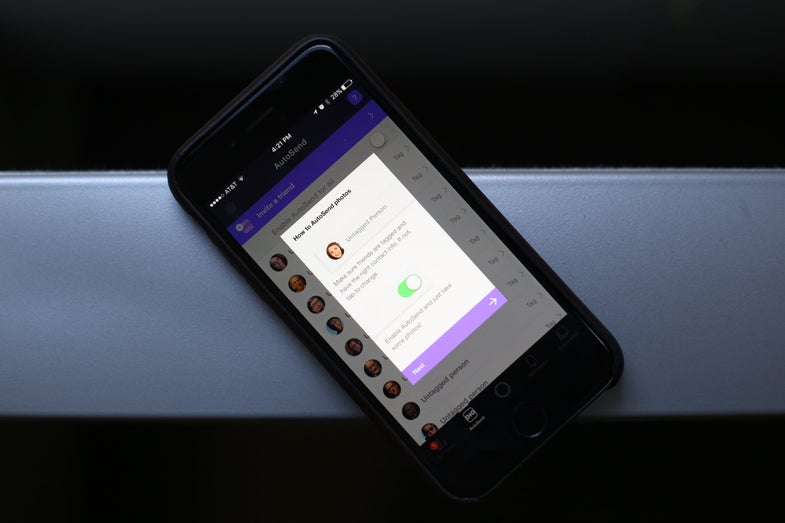 We say it all the time at parties, on vacation, or during formal events. But some (like me) are forgetful and terrible friends, and the photo never gets sent.

The Knoto app uses artificial intelligence to try to fix that problem. When you take a picture, Knoto’s facial recognition algorithm detects who’s in the photo, and automatically sends them a copy.

“It’s really a different experience when you’re getting these photos,” Jonas Lee, CEO of Knoto’s parent company PhotoKharma, told Popular Science. “On the receiving end, you’re getting a broadcast of you, from your friends.”

The concept behind Knoto’s technology is to make photo sharing easier. Instead of thinking about sending photos to people or uploading them to Facebook, it’s done automatically, and with the photos that people are most likely to want: the pictures of themselves.

When you first launch the app, Knoto attempts to connect with Facebook to know who you are, and what your friends look like. After authorization (you must allow Knoto to connect to Facebook for it to work), the app goes through all your tagged Facebook images, and your images where your friends are tagged, using them to recognize the people in your life. It also goes through all the photos in your phone, and tries to make matches. You can help the poor algorithm out by manually tagging people you take pictures of often, as well. 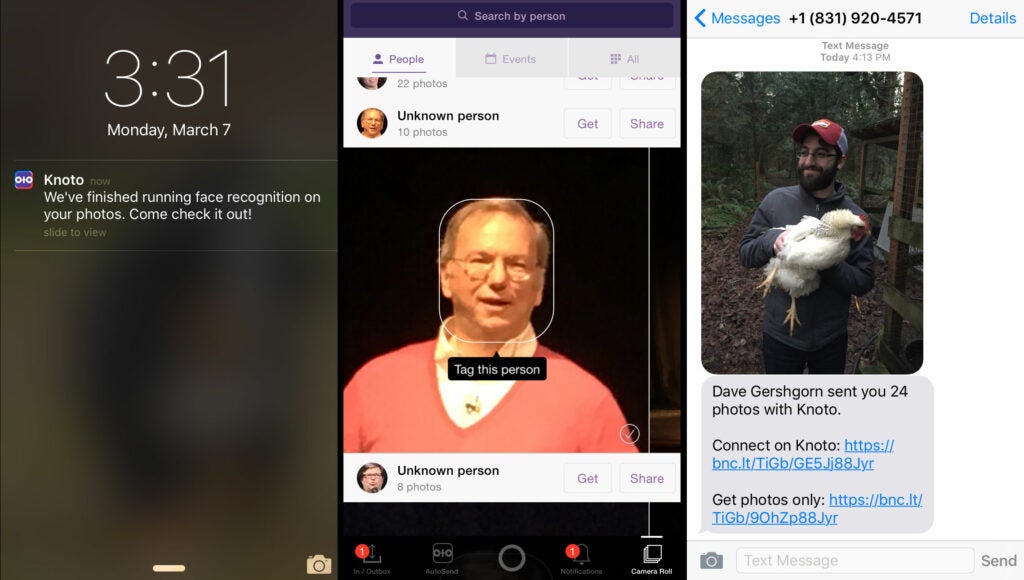 The App That Automatically Sends Photos

The Knoto app automatically recognizes the faces of people in your photo library, and can use that information to automatically send pictures of them.

Once you take a photo, the Knoto app finds the faces in the image, crops them out, and sends them to the encrypted Knoto server. There, the faces are matched to other known faces, and this data of the person’s identity is transmitted back to your phone.

The photos are then sent and received by the Knoto app, which ends up being a stream of photos of yourself and your friends or family. If the person being sent the photos doesn’t have the app, they get a text with an image and a link to download other photos.

In terms of privacy, Lee says that by cropping the photos to only include faces and transmitting those cropped images eliminates a lot of concerns.

“Everybody is naked from the face up,” Lee said, adding that no human looks at the photos, either. (This of course disregards those doing handstands.)

As you take more photos, the app’s software gets better overtime. Those two acts, learning from photos and then applying that knowledge, is the artificial intelligence at work. Knoto uses convolutional neural networks, a flavor of machine learning that works well with images, to identify specific people in photos.

When I tried it, Knoto processed all the photos in my phone, which included every member of my grandfather’s Navy crew from WWII, Paulie from Goodfellas, and Alphabet executive chairman Eric Schmidt. However, I feel confident won’t be sending them any photos (especially Paulie).

However, the app worked well. I tried to send 24 photos to myself and I quickly got a text with an image and links to the rest of the photos.

There are some limitations, however. Namely, the Knoto app needs to be perpetually open in the background, so it just doesn’t work if you’re one of those compulsive app closers. (We all know the type.)

I also didn’t get options to send photos to my Facebook friends via Messenger or the like, and after the app had looked through my Facebook photos, I still had to manually tag a bunch of people, which seems to defeat the whole point of Facebook integration.

Knoto is great for people who take lots of selfies with friends, or go on trips together and are forgetful about social media. It’s a product that relies on people being lazy, and too busy doing other things to deal with their photos after they’ve been taken. But are people ready for automatic sharing? That’s the gamble Knoto makes.

The Knoto app is available for free on the iOS app store today.