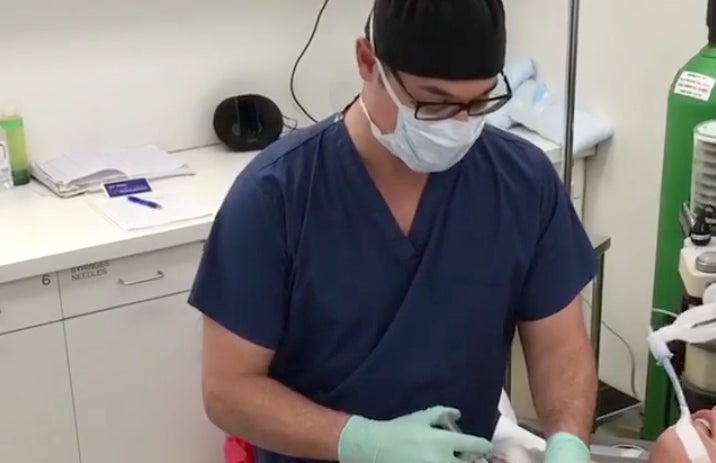 The video was broadcast to show the operation on a man who lost 270 lbs. Buzzfeed/Facebook
SHARE

Working at Popular Science, you tend to develop a decently strong stomach when it comes to blood, guts, gore, and various other organic compounds — stuff that people outside of the biological sciences may find gross. But even I’ve been surprised to see how quickly people have taken to using Facebook Live and other social video streaming apps to broadcast the human body in biologically dramatic situations, sometimes in graphic, intimate detail.

What am I talking about? Some recent examples that I’ve encountered (NSFW-ish, obviously):

It’s easy to imagine any or all of these scenes featuring in an old David Cronenberg movie (he’s the director of Videodrome, The Fly remake starring Jeff Goldblum, and Dead Ringers, to name a few classic body horror films). Yet they’re all real. Raw, unedited, documentary footage of the human body being worked over, captured and shared by people close to the situations as they’re occurring.

Whether or not you’re into that sort of thing, it’s wonderful to see the medium of live video broadcasting becoming more affordable and democratized (even if the platforms are still controlled by a few big companies — Facebook, Snapchat, Twitter through its Periscope app, to name a few). It’s also cool to see people sharing live videos of situations the wider public is not usually privy too. And more broadly outside of these free social video apps that have become available in only the last few years, the entire history of film and video is filled with people capturing all sorts of intimate and vivid scenery of the human body.

Broadcasting these scenes could even serve an educational purpose and make viewers more informed about the sciences, which would be nice. Live video surgeries have been broadcast with the specific aim of training new surgeons, which seems like an excellent use of the technology. So far though, a lot of these social live broadcasts seem designed less to educate and more to scandalize, titillate, and entertain.

And as I’ve written before elsewhere, I think social video apps actually change the medium of video altogether in critical ways. The portability and ease-of-use of a smartphone camera, combined with near persistent data connections, means that anyone can broadcast anything from anywhere at any time before a potential audience of millions around the world.

This opens up tons of awesome possibilities, but also many potential opportunities for abuse and exploitation. It’s now much easier for people to film themselves engaged in destructive behavior in real time, whether of themselves or of others, on purpose or by accident. I am loath to imagine if something goes wrong during a livestreamed or Snapchatted surgery. Correspondingly, it’s easier for audiences to click on these videos unprepared for what they’re about to see, or to egg video stars on when they’re doing something harmful.

The major social video apps all have guidelines prohibiting what they deem to be harmful content, along with sexually explicit and other discriminatory, abusive, or predatory displays. Sadly, we’ve already seen live video used to capture and broadcast horrors and tragedies, including one a few days ago in France (not linking out to these of respect to people who may be affected).

I’m not trying to equate any of these live video examples to one another, mind you. And I think like all new mediums, it will take people some time experiment and find the best and most interesting uses for live social videos.

We’re living through a particularly interesting period though, one where it’s all too easy to be going about your merry way on the internet, clicking and tapping links posted by your friends, only to stumble across a shocking video that may not be suitable for all audiences and age groups. The ease with which we can all share discrete links to content on Facebook, Twitter, and other social networks without context makes for inevitable surprises about what may we find upon clicking through. And while some live videos do come with NSFW or graphic content warnings, not all do — nor do I think labeling them as such should be a requirement. Instead, maybe it’s best if we just keep the old broadcast warning generally in our minds as we click and tap around the web these days: viewer discretion is advised.