What Happens As Decades Pass In A Whiskey Barrel?

The science of how a spirit gets better over time 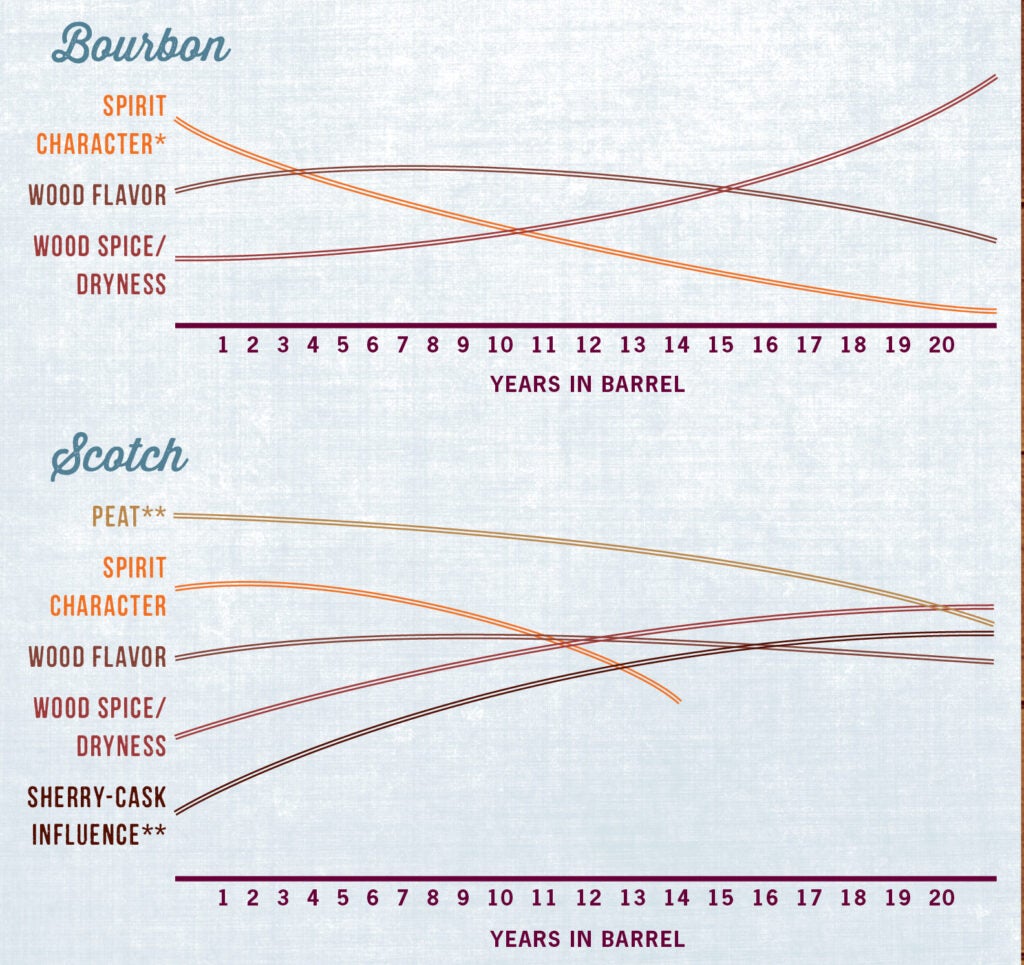 Evolution of Flavor As A Whiskey Ages

“Spirit character” defines the nature of the new, unaged spirit.

When The Glenlivet’s 50-year-old single malt scotch whisky was freshly distilled in 1964, the new spirit would have been perfectly clear in color and have tasted cereal-rich and slightly smoky from the smoked malted barley from which it’s made; brightly fruity; and slightly solvent-like. Interesting, but needing some time to mellow out in a barrel.

Fifty years later, the liquid is a deep amber color and the smoke aroma is gone; the bright fruit notes have matured into richer baked fruit notes; there are toffee, honey, caramel, and chocolate characteristics; and there is a tannic dryness to the finish. Much of the initial alcohol has evaporated over the half-century in the barrel, leaving a mere 100 bottles available for sale- at $25,000 a pop.

Whisky (and any other spirit, but we’ll stick to whisky for the sake of this discussion) is influenced by the environment inside the barrel, compounds in the wood, especially where it has been charred on the interior, and even the environment where the barrel is stored. Over time, these factors make a significant impact on a whisky’s color, flavors, and mouthfeel. And while we don’t know everything about the magic of barrel aging (or else someone would have perfected a way to replicate it in a lab), we do know a great deal.

Bourbon must by law be aged in previously unused, charred wood vessels, whereas Scotch whisky is typically aged in barrels that previously held bourbon or sherry. Bourbon is aged in American oak barrels but Scotch is sometimes aged in European oak.

Barrels are either toasted (mostly in Europe) or charred (mostly in the US) before whisky is aged in them. This charring creates charcoal inside the barrel that filters (via adsorption) the spirit and partially removes undesirable flavors, much like how your water filter works at home. (Most Tennessee whiskey, including Jack Daniel’s, is run through charcoal before aging for additional filtration.)

Freshly-distilled whisky would change a bit over time without exposure to oak if it were stored in a neutral container like stainless steel, but it turns out the barrel is still important. Dr. Bill Lumsden, distiller of Glenmorangie and Ardbeg Scotch whiskies and an expert on wood, points out that in the barrel “development of fragrance and complexity spontaneously happen, but the key reactions are believed to be catalyzed by the wood itself.”

The environment outside the barrel matters as well. During changes of temperature between hot and cold seasons the liquid expands into and contracts out of the wood, accelerating those wood interactions. There is less temperature variation in the mild climate of Scotland than the blazing-hot-to-freezing-cold of Kentucky, and this (along with Scotland’s preference of used barrels) makes bourbon whiskey hit its ready-to-drink sweet spot much earlier than Scotch whisky does

The wood itself adds flavors to the whisky, in the form of three main compounds. Degraded lignin in the wood helps add vanillin to the spirit (lending vanilla and marzipan-like flavors). Lactones give rise to a buttery, coconut flavor. As American oak has a higher concentration of lactones than European oak, the strong presence of coconut-like flavor is one way tasting experts can tell that a spirit was aged in American oak. In the chart above from the book Tasting Whisky by Lew Bryson, lignin and lactones are the main part of what is labelled “wood flavor.”

The “wood spice” in the diagram refers to a third set of compounds: the astringent flavors of tannins (and some other compounds like hemicellulose) also extracted from the wood. (Tannins are also strong in tea and walnuts, producing a similar dry mouthfeel.) European oak is richer in tannins than American oak, so again tasting experts can often guess in which barrel a spirit was aged based on this mouthfeel. As can be seen on the chart, tannins keep extracting into the spirit over time, so that at some point their influence overtakes the flavors imparted by lactones and lignins, and the whisky tastes less like a delicious bowl of butterscotch pudding and more like an old wet log. This can happen quickly in Kentucky’s temperature-variable environment (between four and nine years old seems to be bourbon’s best point of perfect balance) but often much more slowly in Scotland, where 10-18 years of age is its typical sweet spot.

Finally, in that very rare Glenlivet 50-year-aged Winchester Collection whisky that has miraculously remained in balance between maturity, wood flavor but not too much wood influence, we have only to figure out one thing: Where did the smoky flavor that was in the new distillate go?

Smoke flavors in scotch whisky typically come from the smoke of burned peat- decaying bog vegetation on its way to becoming coal- that is used to dry barley. (In the chart above, “peat” referrers to peat smoke.) Smoke flavors are measured in the lab by quantity of phenols, but despite our association with campfire smoke, phenols aging in a whisky barrel don’t blow away on windy days. Rather, they transform there.

Bryan Davis of Lost Spirits Distillery makes a very smoky American whiskey (typically a Scottish practice) and has studied the science behind the smoke. He says, “The longer you age, the more the phenols bond with other things in the solution to form new compounds like phenylated carboxylic esters, which tend to taste like honey. In a way, you trade smoke for honey.”