Rise, shine, get a shot in the arm 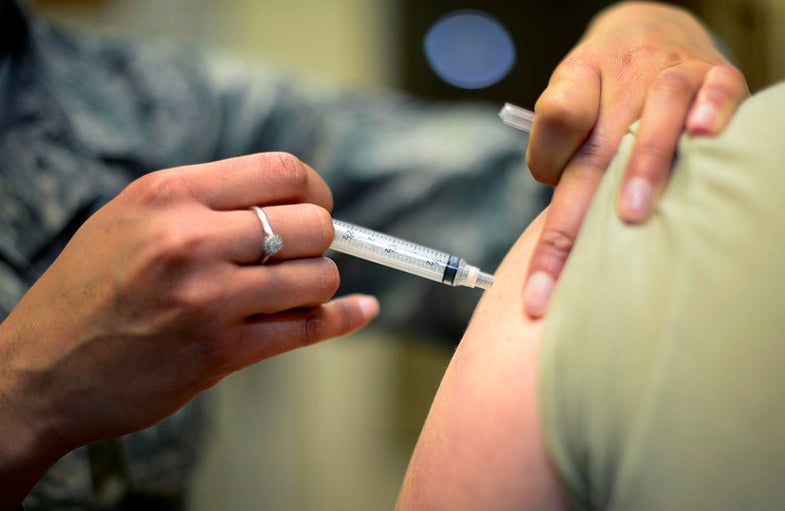 Every year, somewhere between 250,000 and 500,000 people die from the flu around the globe. In an effort to avoid catching the flu, more than 40 percent of American adults get the flu vaccine every year. But how well that vaccine works might depend on what time of day you were jabbed—patients who received a flu vaccine in the morning had a much higher concentration of flu-fighting antibodies in their blood a month later, according to a study published yesterday in the journal Vaccine.

Researchers suspect that the body’s immune system fluctuates throughout the day, though studies addressing this have reached mixed conclusions. If these variations do exist, though, it’s likely because of changes in hormones associated with the body’s circadian rhythm, such as cortisol and androstenedione. But the exact effects of these daily fluctuations have been hard to pin down because the resulting immunity varies between different diseases, and can depend on a patient’s sex and age, studies have shown.

In this study, conducted in the United Kingdom, the researchers were most interested in patients older than 65, the demographic most likely to die from the flu. The researches vaccinated 276 healthy seniors, about half of them in the morning (between 9 AM and 11 AM) and the other half in the afternoon (between 3 PM and 5 PM). One month later, the participants gave a blood sample, which the researchers checked for antibodies against the three different strains of the flu that the vaccine was meant for.

The researchers found that the participants vaccinated in the morning had significantly more antibodies than those that received the vaccine in the afternoon, indicating that the morning group had a better response to the vaccine. The researchers also analyzed the blood to find the different levels of hormones but didn’t find a specific hormonal change that linked directly to such a dramatic change in vaccine response.

The researchers yet don’t know how vaccination time of day would affect people with compromised immune systems, or if the same tactic would work for a pneumonia vaccine, which is recommended for most seniors. They plan to do a larger study among seniors to address both of these questions, according to a press release.