Vaccine Patches For Measles Could Be Here By 2017

The highly anticipated technology could save thousands of lives per year 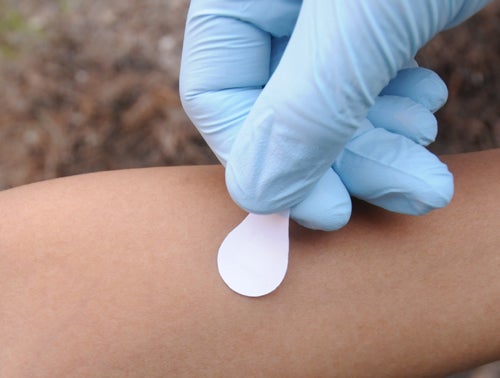 Every year, vaccines for diseases like polio and yellow fever save thousands of lives. But in remote parts of the world where medical attention is scarce, vaccines are harder to come by. Many have to be administered with a needle, which requires sterile conditions and a medical professional to make it work. Also, many of the vaccine solutions have to be kept refrigerated or they expire quickly, making them harder to keep on hand.

To work around these logistical challenges, researchers have been working for years on creating a pain-free patch to vaccinate against measles. The patch would administer the same solution to a patient using microneedles–no refrigeration or medical personnel required. Today researchers from Georgia Tech and the Centers for Disease Control and Prevention announced that a measles vaccine patch could begin clinical trials as early as 2017. That may not sound like a big deal since we’ve been hearing about vaccine patches for a decade, but this is the first time we have a real timeframe in which we can expect to see them undergoing experimentation.

Vaccine patches have taken a while to come about, because the skin does not easily absorb the large molecules used in vaccines. As a result, previous iterations of the vaccine patch haven’t been as effective as vaccines administered by needle. Georgia Tech researchers are not the only ones working on a vaccine patch, but they have long been at the forefront of this field; the team recently completed another study in monkeys and found that their measles vaccine patch worked just as well as a vaccine administered by needles and had no adverse side effects. The patch is also more stable at varying temperatures and won’t require refrigeration, making it hardier than existing vaccines.

Measles is of particular concern to the CDC, because it only survives in human hosts and is extremely contagious. Even though vaccines exist, 400 people still die of complications from the disease every day worldwide.

“With no needles, syringes, sterile water or sharps disposals needed, the microneedle patch offers great hope of a new tool to reach the world’s children faster, even in the most remote areas,” said James Goodson, an epidemiologist from the CDC’s Global Immunization Division. “This advancement would be a major boost in our efforts to eliminate this disease, with more vaccines administered and more lives saved at less cost.”