The effort was strictly for practice, but represent a major first step in its potential future clinical use. 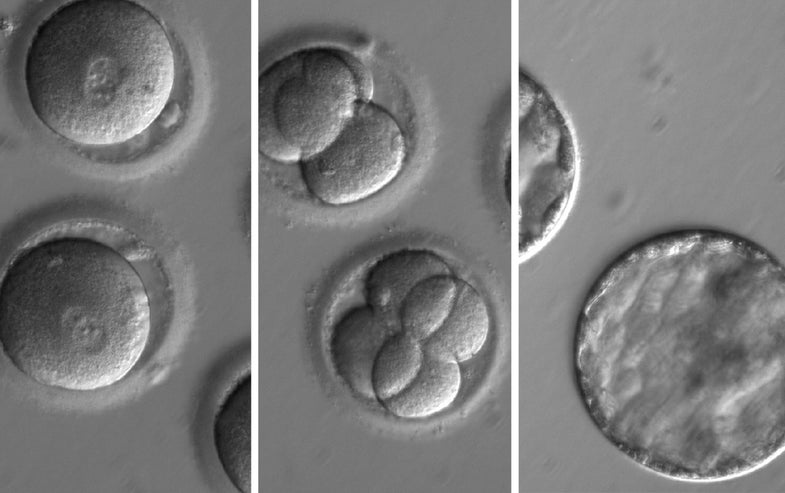 This sequence of images shows the development of embryos after co-injection of a gene-correcting enzyme and sperm from a donor with a genetic mutation known to cause hypertrophic cardiomyopathy. A new study, published today in the journal Nature, demonstrates an effective method of repairing a disease-causing mutation from the moment of fertilization, preventing it from being passed to future generations. (OHSU). (OHSU)
SHARE

In a paper out today in the journal Nature, researchers successfully used the new gene editing technique colloquially known as CRISPR to correct a defective gene that causes a specific type of heart disease. The researchers performed the experiment on viable human embryos, a first for the United States. Last week, MIT Technology Review first reported the news but the exact mechanisms were still unclear and the type of gene the scientists corrected was unknown. From a broader perspective, the experiment showed that CRISPR could be used to correct genetic errors that lead to disease and researchers say it represents an important step toward using this in human embryos intended for pregnancy.

Though this use of the technique is a first for the United States, researchers in China have already attempted this, according to previous reports. Researchers around the world, including the United States, have used CRISPR to edit the genomes of somatic cells, which only affect the individual person. Editing germ line cells, which is what the researchers did here and what Chinese researchers have already done, is much different. If their germ line cells are edited, those changes will be passed down to every generation that follows.

Researchers are extremely wary of this. The technique could be a safe and potentially extremely effective way of avoiding many terrible genetic diseases. But since the approach is new, it’s not yet clear what effect this will have on people throughout their lives. And it wouldn’t just be affecting them, but every generation that follows. Depending on how it’s used, the technology also has the potential for “designer babies”, tweaking the DNA not to prevent disease but to control other genetically determined factors like eye color, height, or potentially athletic ability and intelligence. That’s why the United States has implemented strong guidelines regarding this technique. In February, a committee formed by the National Academies of Sciences, Engineering, and Medicine, endorsed the use of CRISPR on embryos, but only for dangerous genetic diseases where there aren’t any other successful treatments out there.

In this specific study, researchers used CRISPR to edit out a mutant (disease-carrying) copy of the MYBPC3 gene, a gene that encodes a protein that helps create well structured and maintained heart muscles. Mutations in that gene cause hypertrophic cardiomyopathy (HCM), which can lead to sudden cardiac arrest in young and healthy athletes. The disease occurs in about 1 in 500 people.

In the experiment, the father had the mutant gene and the mother had a normal version. The researchers used CRISPR, which essentially cuts and replaces faulty DNA, to fix the mutant version. Then, when they fertilized the egg in a petri dish, they simultaneously introduced the genome editing parts. 75 percent of the resulting embryos showed no signs of the mutant genome (if the eggs were fertilized without CRISPR, the chances of the mutation being present would be 50 percent).

The researchers see these results as an initial success. They also overcame two major hurdles in CRISPR research thus far: the potential for mosaicism (where only some of the cells get edited and the rest don’t, resulting in some regular and some mutant cells) and off-target effects (CRISPR edits genes that look like the mutant genes, but in fact are not). Only one fertilized egg out of 58 showed signs of mosaicism and the researched did not detect any off-target effects. These are promising signs given that both conditions were major limiting factors in the safety and efficacy of the technique.

For now, it’s important to remember that the results are promising but preliminary. The fertilized eggs were never intended for pregnancy and researchers will need to do these types of experiments many times over before, with even better results, before they can be deemed safe enough for use in eggs intended for pregnancy. But nevertheless, as Nerges Winblad and Fredrik Lanner, clinicians at the Karolinska Institute in Stockholm, Sweden, say in a commentary that accompanied the Nature paper, that it is an important step. “This study is paving the way as part of investigations that might lead to CRISPR-Cas9 reaching the clinic in the future.”