Researchers used CRISPR to encode a movie into DNA 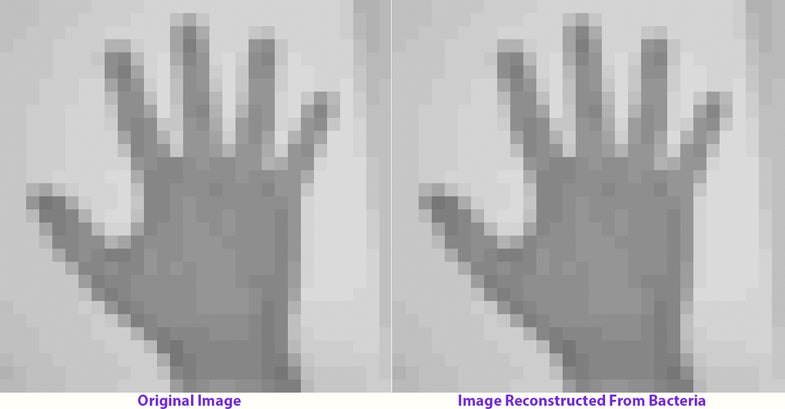 This week scientists announced something kind of weird: Using the gene editing technique CRISPR, they encoded a series of images and a GIF into the DNA of E. Coli. Scientists have actually been encoding images and basic pieces of information into bacteria for years. But encoding a movie represents a big storage upgrade. In the future, the researchers say, this will help enable them to employ bacteria as tiny video cameras, capturing information in places humans can’t get to.

“What we want this system to be used for, eventually, is not to encode information that we already have, but for a way for cells to go out and gather information that we don’t have access to,” says Seth Shipman, a neuroscientist at Harvard University and lead author of the study. “If we could have them collect data and then store that data in their genomes, then we might have access to completely new types of information.”

DNA, made up of the molecular components that carry the genetic codes for life, is also an excellent medium for storing data. Shipman and his team used a relatively new gene editing technique called the CRISPR-cas, employing two proteins to insert information into the DNA of the bacteria E. Coli. The information they inserted was in the form of nucleotides (the building blocks of DNA). The entire code, when sequenced and read, corresponds to the individual pixels of each image or each frame in a video sequence. Their work was published today in the journal Nature.

The study’s success is noteworthy for a number of reasons. First, it shows that scientists are getting a pretty good grasp of how the CRISPR-Cas system works and how to apply it. But it also shows that we can now encode, upload, and read data that follows a specific time—just as a movie camera is able to tell us not just what happened, but how long it happened for.

“If we are going to have these cells out in the environment collecting data, we need to be able to pull back out the timing that they get things just as you would with any recording device,” says Shipman. For example, he says, you could imagine having modified bacteria with sensors meant to catch a certain pollutant in the environment. When the bacteria sensed the contaminant, they’d take note in their genomes. But when we examined them later looking for data, we’d need to know when the pollution had been “spotted” in order to track it properly.

These little genetically altered timekeeping microbes could also be used to better understand the human body, including one of our most mysterious organs—our clever noggins. Shipman has a vision, with the help of this technology, of having every cell in the brain recording what’s going on as the organ functions. That could help scientists understand what happens inside the brain during basic daily tasks, something that’s still relatively mysterious in neuroscience. Potentially, specially encoded microbes could even be used to detect disease by noting early changes in cell structure and function.

But that’s all at least a few years into the future. For now, Shipman says, he and his team need to figure out how to enable the bacteria to collect specific information on their own. In this study the scientists knew exactly what information was going in—after all, they put it in themselves. Now, the researchers are focused on getting the system to encode something that they don’t already know. Their ultimate goal is to turn these bacteria into microscopic video cameras, observing you and the world around you. It might sound a little creepy, but it would also be incredibly useful.