The human body is really great at packing huge things into tiny spaces. Your small intestine, for example, is twenty... 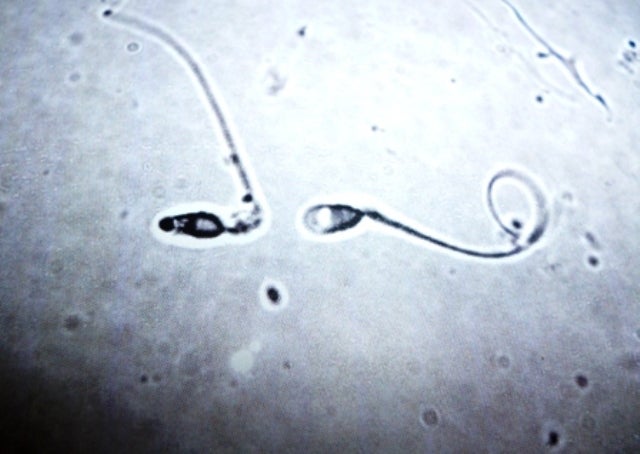 The human body is really great at packing huge things into tiny spaces. Your small intestine, for example, is twenty feet long and squeezed expertly into your gut. Your brain has something like eighty-six billion neurons (depending on which scientist you ask) jammed into 3.3 pounds of tissue. But those packing jobs are nothing compared to your DNA. The human genome is more than three million base pairs. If you stretched it out into a thread it would be, very roughly, six feet long and squished into the nucleus of every one of your cells. That’s quite a feat in itself. But the task becomes even more miraculous when you think about squeezing half of that information into a sperm, which is smaller than your average cell. (An egg cell, for example, is about six times the size of a sperm cell.) Now, a team of scientists at the Cold Spring Harbor Laboratory think they’ve finally figured out how the male body manages to get it done. They recently published their work in Nature Communications.

The discovery happened completely by accident. Researcher Alea Mills was studying a specific protein, called Chd5. It was discovered in 2007, and since then, research has shown that it’s excellent at suppressing cancer tumors. So, in order to better understand why that’s the case, her team decided to genetically engineer a bunch of mice without the protein—hoping to eventually see if these mice lost the ability to fight off cancer. During preparation for the experiment, her grad student Wangzhi Li began attempting to breed the Chd5-less mice so they could have enough of the rodents to conduct their research.

But once the initial mice were created, Li had a really hard time mating them. Without the protein, they were practically infertile. What the heck was going on, they wondered? Had they inadvertently stumbled across a previously unknown job this protein did? Did it somehow play a role in fertility?

The team sought out one of the few experts in the world who is capable of isolating sperm cells in an attempt to see what was causing the fertility problem. What they found was that, without the protein, the DNA inside the mice sperm was all wonky.

Normally, our DNA fits into our cells by wrapping itself around a bunch of proteins, called histones, like several spools of thread. This makes it easy for our cells to unwrap the thread and access the pairs of DNA they need to express certain genes—or keep unwanted genes tightly bound and inaccessible. But this method doesn’t work in sperm, they’re simply too small for the histones.

Turns out, based on the team’s follow-up research on Chd5 and its job in fertility, getting DNA into a sperm cell is way more complex than, say, getting DNA into a female egg cell. Sperm start out as a large round beach-ball, but they go through sixteen stages of changes—they grow a head and a tail, for example—before they leave the body on their journey to fertilize the egg. And this protein that’s really great at fighting cancer seems to take over the job of wrapping up the DNA. The researchers think it gets rid of the bulky histones and re-wraps the genetic code onto smaller spools, proteins called protamines, that can fit inside the sperm and help keep all the DNA orderly.

Right now it’s just a correlation, but according to Mills, when it came to the mice that were missing the protein, even when the team forced fertilization by combining sperm and eggs in a test tube, things didn’t work out. “Normally they make little embryos, but in this case the sperm was pitiful. Normally you can watch the cells divide and it’s really pretty. But this time everything was mucked up.”

If you think about it, it makes sense that this protein is great at fighting cancer. Cancer is caused by mutations in DNA—little errors that are made along the length of the genome that happen naturally during replication or unnaturally during exposure to radiation and chemicals. Normally, cells read through their DNA and clean it up to fix any errors. But if that DNA isn’t wound up and packed right, the cells can’t fix any mistakes. (The scientists know that having more of the Chd5 proteins increases the likelihood of surviving cancer, but they’re still trying to figure out why.) On the fertility side of things, any babies that somehow manage to come from this protein-lacking sperm (an extremely rare occurrence) would be much more likely to have diseases caused by wonky DNA.

What all this means is that scientists are starting to wonder if the protein isn’t just a great cancer fighter, but also if it possibly plays an important role in male fertility. Their discovery, made completely by accident, is one that other scientists will very likely take on and study further.

“This is what’s so cool about being a scientist,” says Mills. “You find these things you couldn’t have dreamt of. Life is just amazing that way.”