Injecting Oxygen Directly into the Bloodstream Could Save Suffocating Patients

When a person stops breathing–be it from an obstruction in the airway or something like acute lung failure–the clock is... 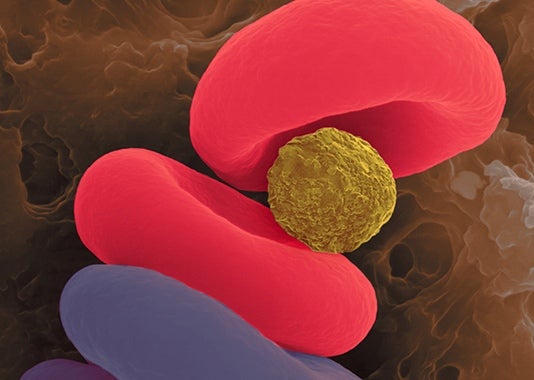 When a person stops breathing–be it from an obstruction in the airway or something like acute lung failure–the clock is decidedly ticking. Deprived of oxygen for long enough, a person can go into cardiac arrest. Brain damage sets in. Without oxygen, things go south pretty quickly. So a team of researchers at Boston Children’s hospital has designed a kind of injectable oxygen that can be quickly introduced to a person’s bloodstream to oxygenate the blood, buying paramedics or other medical personnel perhaps as much as half an hour to remedy an oxygen flow problem.

The microparticle solution is different than blood substitutes, which do carry oxygen but need to be oxygenated by the lungs. These new microparticles consist of a single thin layer of lipids that encase a tiny bubble of oxygen gas. These particles are delivered to the bloodstream via injection in a liquid solution and can return a deoxygenated blood supply in vivo to near normal levels in a matter of seconds. And if a person gets in a situation where he or she needs this kind of therapy, seconds definitely count.

In animal tests, when the airway was completely blocked and no air could reach the lungs, an infusion of the microparticle solution kept the animals alive and in stable shape for 15 minutes without their taking a single breath. In humans facing a life or death situation, first responders could perhaps buy as much as 30 minutes by popping shots of oxygen into a patient’s bloodstream.

But quash all visions of injecting oneself with a steady dose of oxygenated particles and living indefinitely in an oxygen free environment. The oxygen is encased in lipids–basically fatty molecules–and carried in a solution that would overload the blood in high enough doses, causing a range of other biological complications that would make lack of oxygen just one problem among many. Still, 15-30 minutes isn’t bad if you’re at the receiving end. The microparticles are portable, so given the right approvals every EMT, crash cart, transport helicopter, ambulance, police officer, firefighter, and clinician could keep a syringe full of oxygen particles handy, allowing them to quickly stabilize patients until some other life-saving technology, like a breathing tube, can more permanently rectify the situation.