But not everyone agrees it's from an asteroid impact. 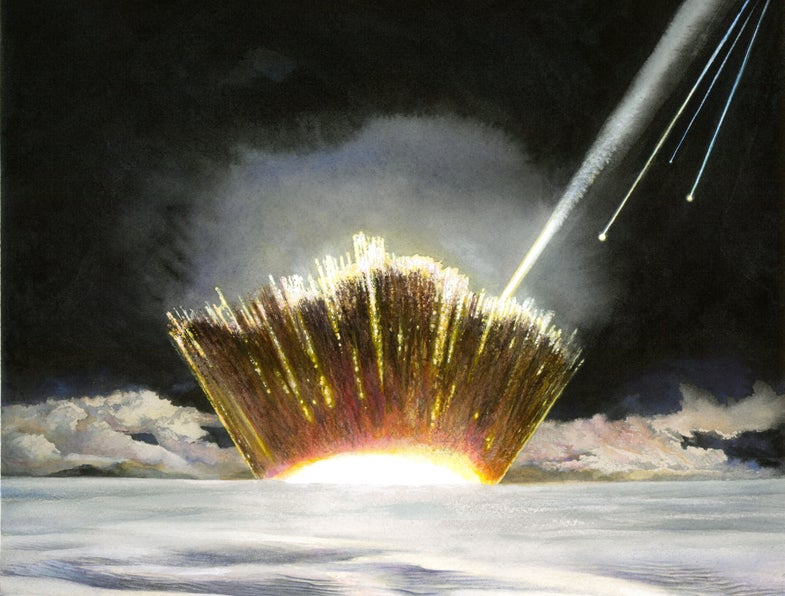 An artist's depiction of a possible impact into the Greenland Ice Sheet. Carl Christian Tofte
SHARE

Thousands or maybe millions of years ago, a giant asteroid slammed into Greenland and created a crater stretching out to about 19 miles in width, according to new findings published in Science Advances on Wednesday. It’s one of the biggest asteroid craters to ever sear itself into Earth’s surface.

If it’s really an asteroid crater, that is. There’s definitely a giant circular cavity sitting underneath an ice sheet that we’ve never before observed, but exactly how it got there has created something of a debate among geologists. Did an asteroid really smash into the ground? Was the crater created by other, more Earthly means?

Here’s what we have so far: a research group from Denmark, studying a topographical map of the bedrock beneath northwest Greenland, realized there was a large, circular, closed depression intact under the massive Hiawatha Glacier. “It went unnoticed simply because it’s a very remote region of the planet that hasn’t been explored all that much,” says Joseph MacGregor, a project scientist with NASA Goddard Space Flight Center and a co-author of the new paper. Most scientists studying the region, he adds, are focused more on the effects of climate change in transforming the environment, and almost nobody was out looking for signs of craters.

Once the Danish team found the depression, however, they quickly went to work to figure out what exactly was going on at this site. Conscripting MacGregor and others from around the world for this investigation, the team collected data from both ground and aerial surveys, analyzed sediment samples in the lab, made radar measurements of the glacier and bedrock beneath, and assessed the extent of the depression’s footprint. The team also started paying much more attention to the area with their own eyes and began seeing more obvious signs of the crater’s presence.

“We’re very surprised that we could find it,” says MacGregor. “But once you start thinking there might be craters beneath the ice, the structure beneath the Hiawatha Glacier sticks out like a sore thumb.”

Eventually, the team settled on a narrative that goes like this: between 3 million and 12,000 years ago, an asteroid roughly 3,100 feet wide and rich in iron pummeled Greenland and left behind an enormous dent in the ground. Later on, the ice sheet would recover and mask the impact crater in a 3,200-foot layer of snow.

At least, that’s part of the story. Exactly what happened in the aftermath really depends on whether or not there was originally an ice sheet there as the asteroid hurtled to the ground. “If there was, then billions of tons of water would have either melted or vaporized instantly, most of which would have eventually made its way into the atmosphere or ocean,” says MacGregor. All of that melted water would have quickly streamed into the ocean. Combined with massive amounts of debris getting flung into the atmosphere, these effects would have likely caused a significant global cooling effect (similar to what is experienced during a volcanic winter). Even in the absence of an ice sheet, there would have still been noticeable environmental effects stemming from such an impact. If the impact really happened, scientists should presumably be able to link the event with perturbations in the atmospheric and climatic record of the planet and the region.

Those links remain an unknown thanks in part to the study’s biggest limitation: the fact that we don’t know when exactly the asteroid hit Earth. The research team has yet to acquire a direct rock sample to radiometrically date the impact crater and give them a narrow timeframe to work with.

It’s not just those few unknowns that are sapping some of the excitement. “I have strong reservations and doubts about the interpretations in this study,” says Christian Koeberl, an impact crater expert from the University of Vienna, who was not involved with the paper. “The authors report on some interesting phenomena, but the ‘definitive’ interpretation and conclusion that a large impact crater underneath the ice has been discovered is a severe over-interpretation of the existing data.”

Another float sample reportedly contains possible enrichment of platinum group elements, which is presumably a sign of meteorite contaminations. Since the float sample can’t be definitively linked as originating from the crater, Koeberl thinks the authors have made a “leap of faith” judgment that their one rock sample, whose platinum group elements are unlike normal meteorite contaminations, comes from the crater, and that this is confirmation the site is an impact structure.

Then there are questions about the crater itself. The 19-mile diameter crater is missing a central uplift or central ring structure that’s ubiquitous in all terrestrial impact craters larger than 2.5 miles. According to Koeberl, one of the most damning problems for the study’s claims is that if the crater really is as young as the authors say it is (remember, 3 million years is a blink in geological terms), it should be surrounded by ejected impact debris hundreds of meters thick. “This is all missing,” he says. “Just a few float samples? There should be thick ejecta layers in all ice cores nearby. Yet there’s nothing.”

If the site turns out to really be an impact crater, the implications extend beyond just knowing there’s a pretty gigantic cavity sitting under the Hiawatha Glacier. “We now know that impact structures beneath ice can be found,” says MacGregor. “It’s now an open question as to how many exist beneath the Greenland and Antarctic ice sheets that we might actually be able to confidently detect.”

But those implications hinge on whether we can confirm an asteroid impact created the crater under the Hiawatha Glacier. The debate will stew on until we collect more data, but one thing is certain: the crater’s discovery just created a whole lot of research opportunities for scientists looking to saddle up and do some ice drilling.