The 10 best countries for motorcycle travel

Go wherever the front wheel carries you. 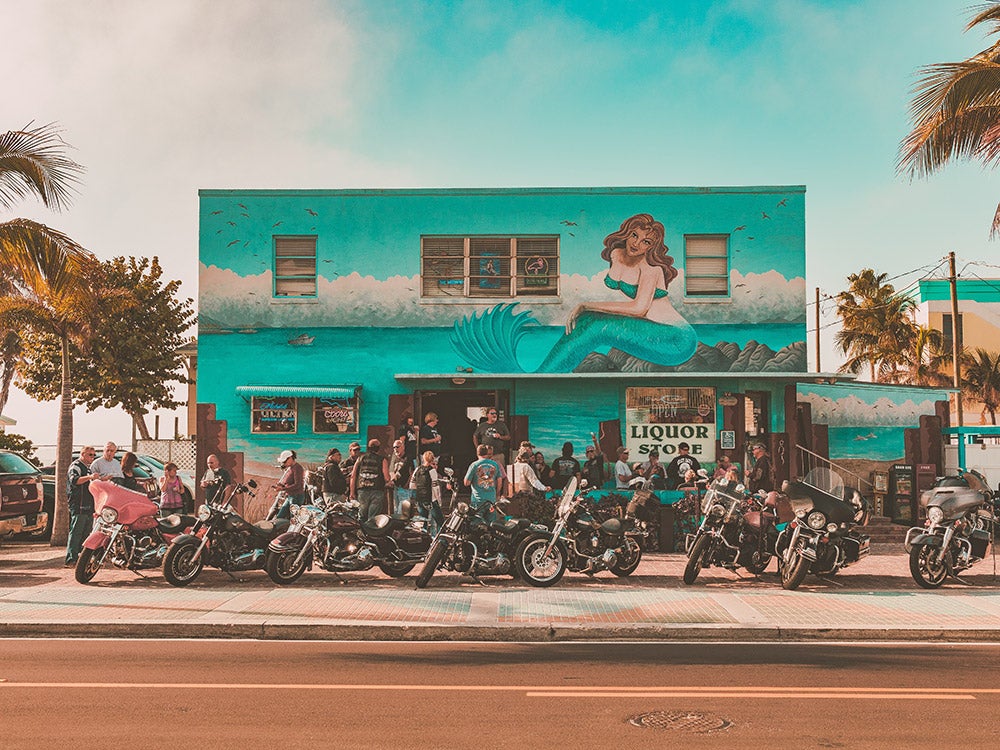 This article was originally published on Motorcyclist Online

If you want to travel by bike without tying yourself to a travel company, consider crossing some of the following destinations off your bucket list. These are all bike-friendly and adventure-worthy.

Whether it’s the drama of the scenery, the hospitality of the locals, or the richness of the motorcycling culture, these places all have one thing in common: You can discover them best on two wheels. 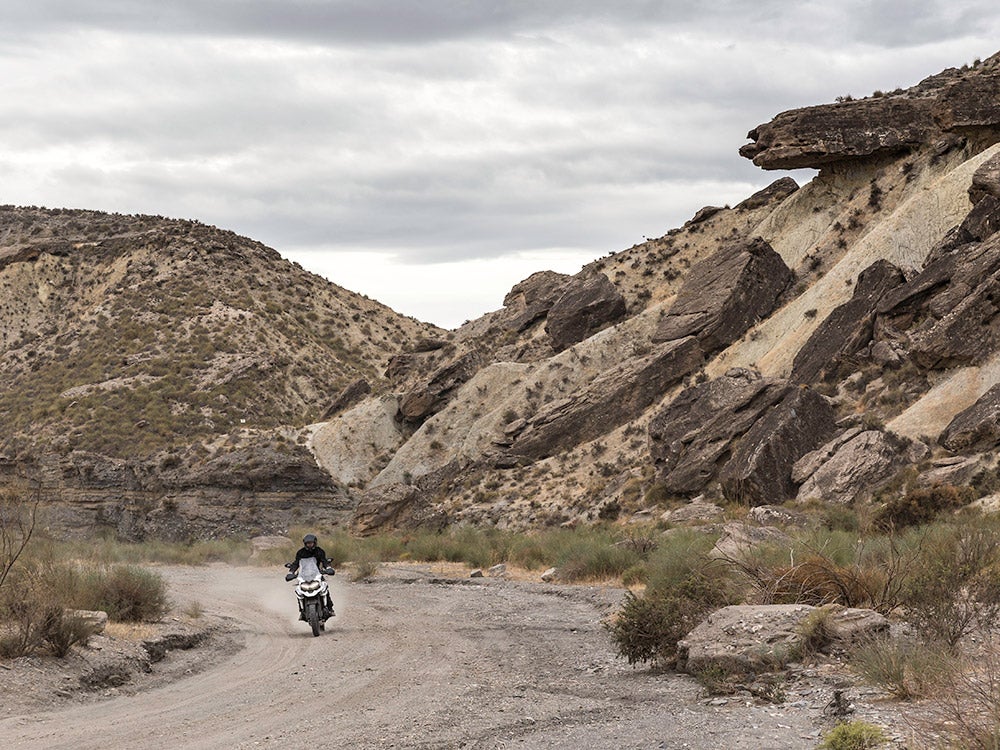 Is it any wonder that a lot of Westerns were filmed here?

To say Spain is the epicenter of grand prix motorcycle racing is hardly a stretch. There must be an overlap between the spirit responsible for the good life of siestas and tapas (“you mean, as long as I keep drinking, you’ll keep feeding me?”) and one that acknowledges motorcycling as an endeavor worth pursuing. From mountain to sea, there are beautiful roads to explore. For motorcycle travelers, it doesn’t get too much better. Plus, anyplace that serves an array of cured meats for breakfast is A-OK. 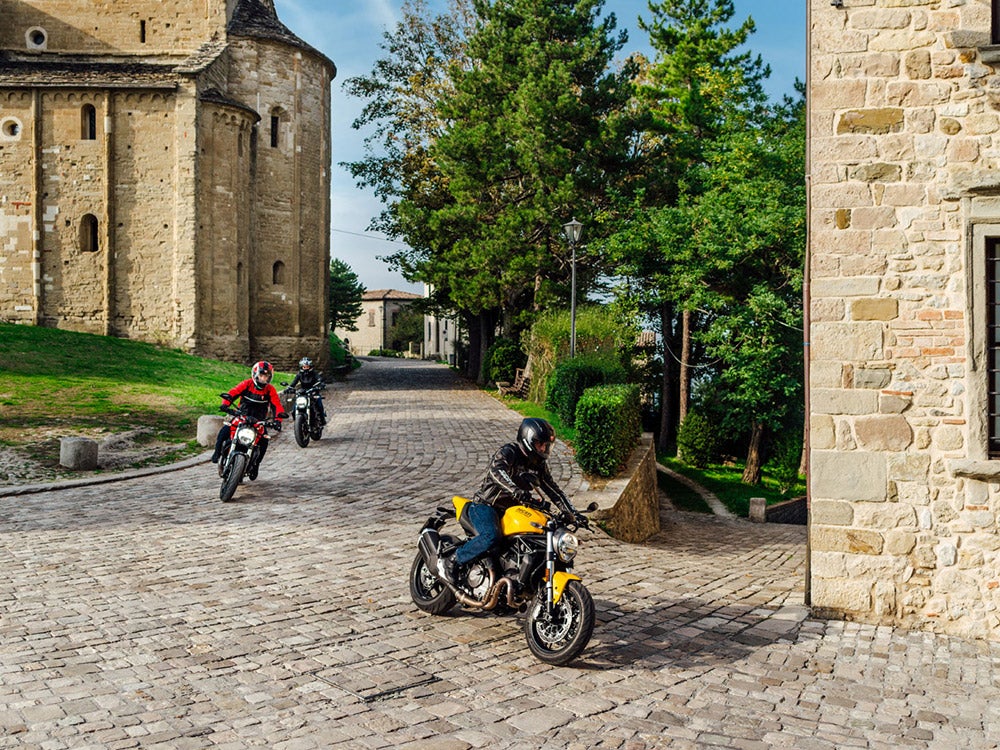 San Leo, Italy. Anyone else want to buy a hammock and retire in this town?

Nowhere is the connection between land and machine more palpable than in Italy. The great cast of Italian marques (past and present) could only ever be from Italy. And you can sense it everytime you thumb the starter on an Italian machine. This is what wine snobs call terroir. It’s what motorcyclists call a hell of a good time. Is there a place more popularly photographed for its winding mountain passes and dramatic vistas? Practically everyone in Italy has a motorcycle story. Why shouldn’t you be one of them? 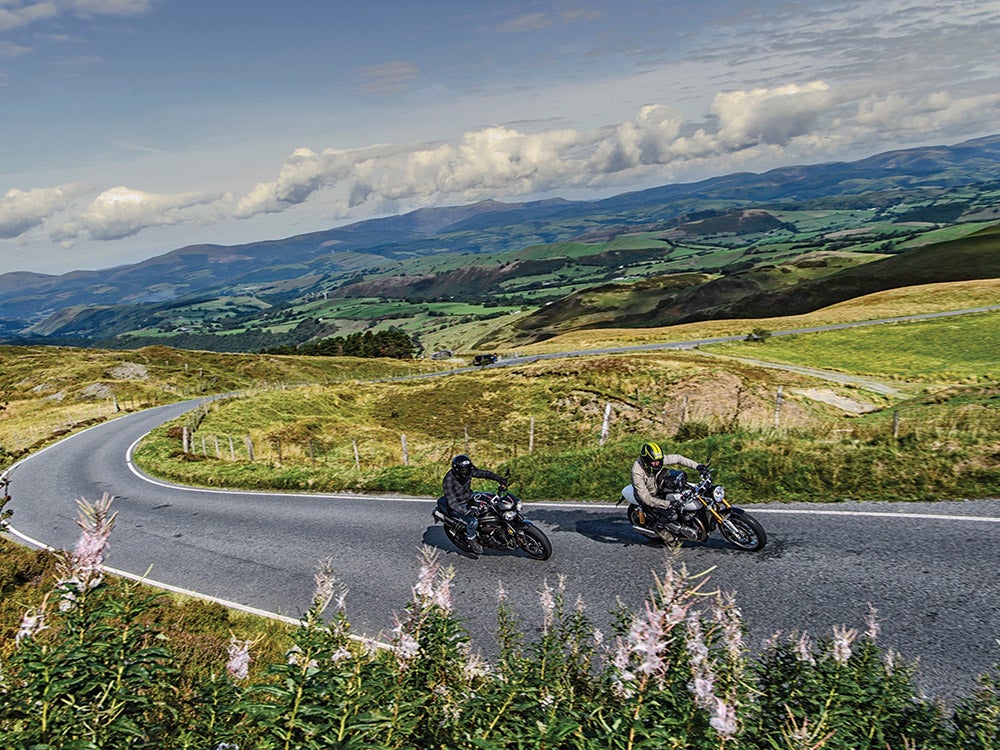 From the Scottish highlands to England’s Lake District, the UK is a motorcyclist’s bucket-list destination. Just look out for the rozzas. And the speed cameras. Depending on the location, you may not be able to discern the accent of the brickie sitting next to you in the pub, but at least the road signs are in English. The UK’s depth and breadth of biking culture—from the cradle of roadracing to the birthplace of café racing—makes it one of motorcycling’s great pilgrimages. 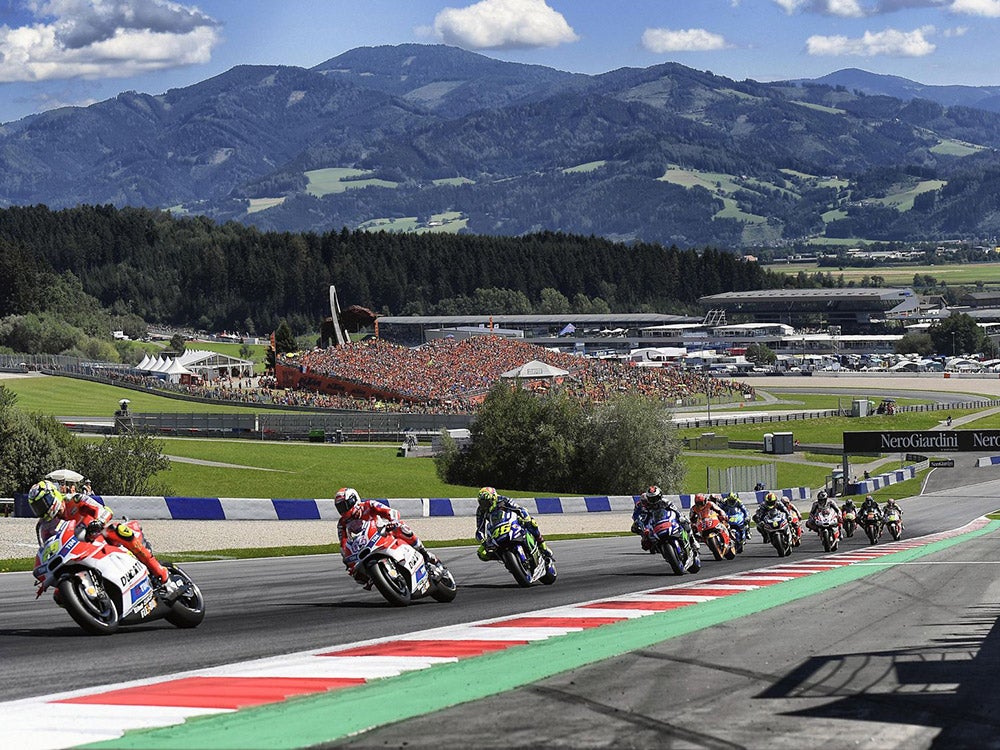 KTMs and mountains. What else do you need? A MotoGP race? Check. Strudel? Check. Austria’s mix of German precision and Italian exuberance (see: KTM) is evident when smooth pavement leading up mountain passes is buzzing with European motorcyclists on holiday. In many parts of America, performance motorcycles are looked at with a mix of disdain, ignorance, and apathy. In Austria, that’s not the case. Sign me up. 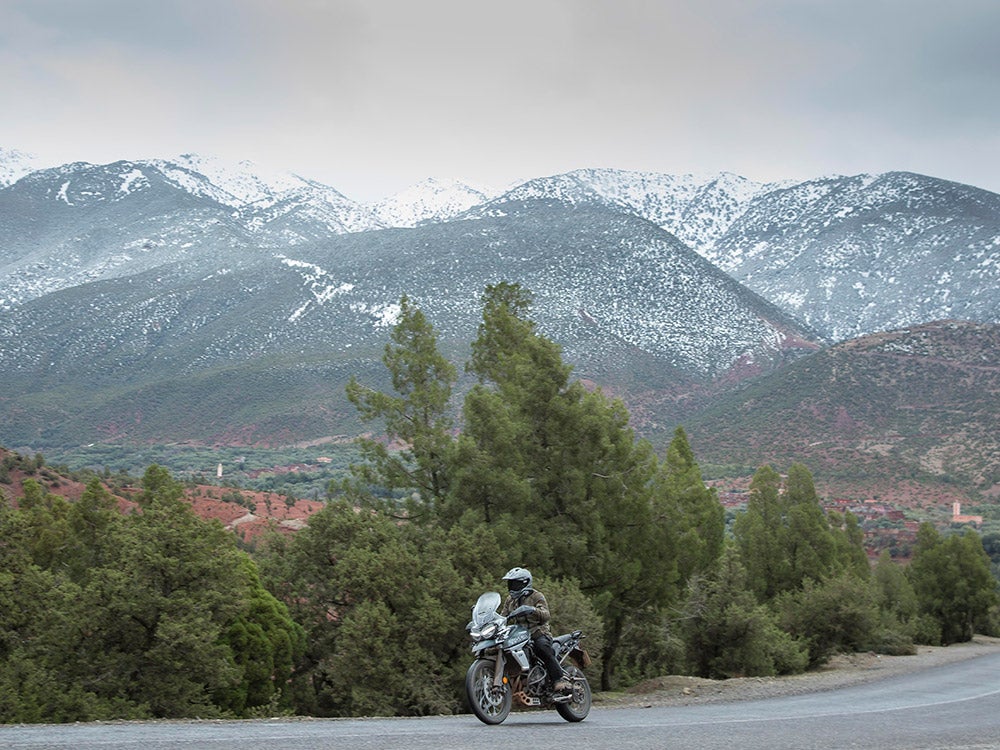 The Atlas Mountains near Morocco.

For the motorcyclist, Morocco is the gateway to Africa. It’s accessible, it’s tempting, it’s sublime. The snowcapped Atlas Mountains are an ADV rider’s dream. Riding through poor mountain villages is a reminder of how far away from America you are. It’s a reminder of how small your scope can be. Wherever you are, you’re always close to a helping hand. The Moroccan denizens are hospitable and eager to engage with strangers. 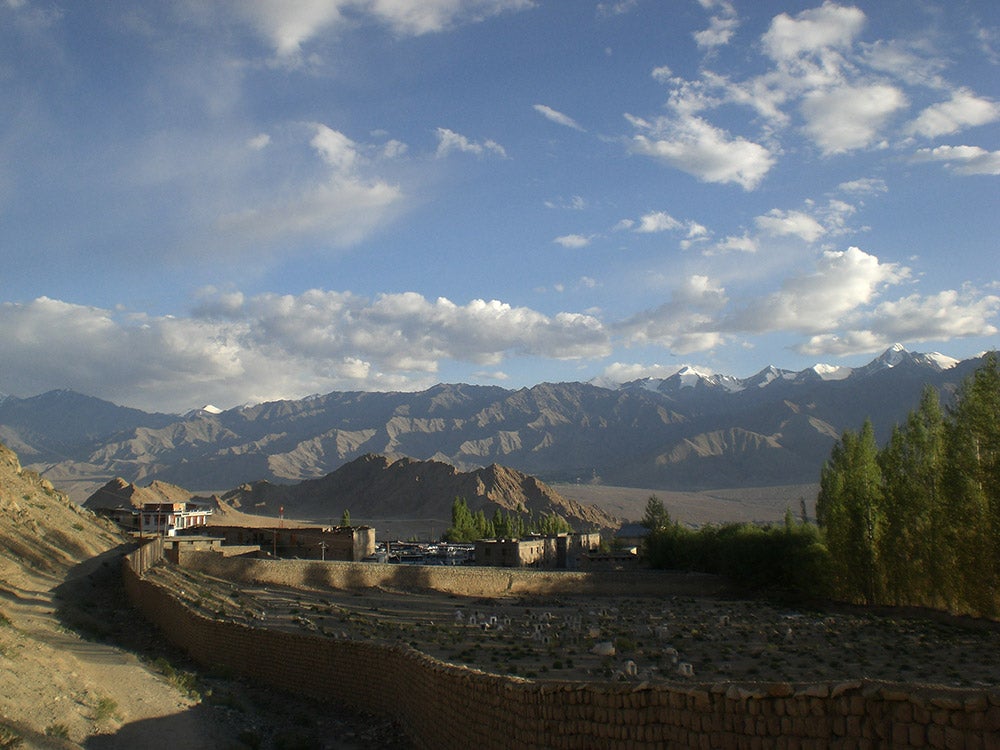 The Himalayan mountain as viewed from Leh, India.

India’s sheer size makes traveling there daunting. Riding can be hazardous as narrow roads cling to cliffs and unyielding truckers ignore your existence. India is a land of extremes that accost every sense. The smells are either intoxicating or noisome. There’s abject poverty and lavish wealth. From the intimate beauty of Himachal Pradesh to the majestic Himalayas, India is a source of constant amazement. Riding a motorcycle there can be harrowing, but the support of locals makes it one of the friendliest as well. 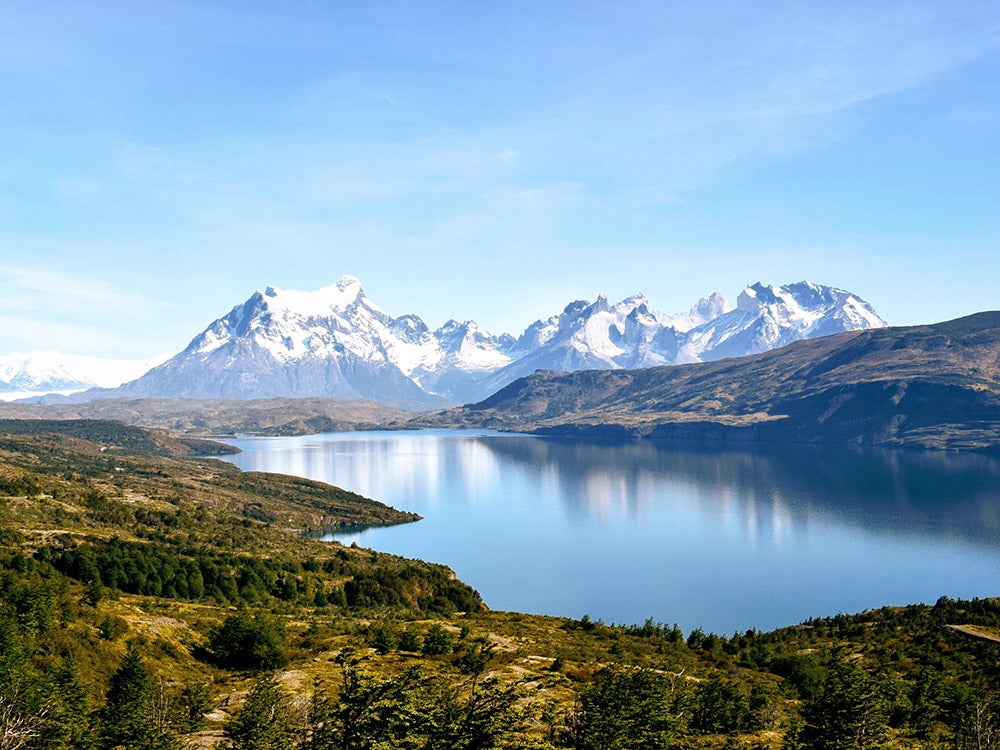 The untrammeled wild of Patagonia is an allure to the motorcyclist in search of the spectacular. Unlike a lot of places, where the motorcycle seems right at home, Chile can make it seem like it doesn’t belong. Not that it’s out of its element, but the near-sacred sights of Patagonia seem to invite us to turn off the engine and put on a pair of hiking boots. 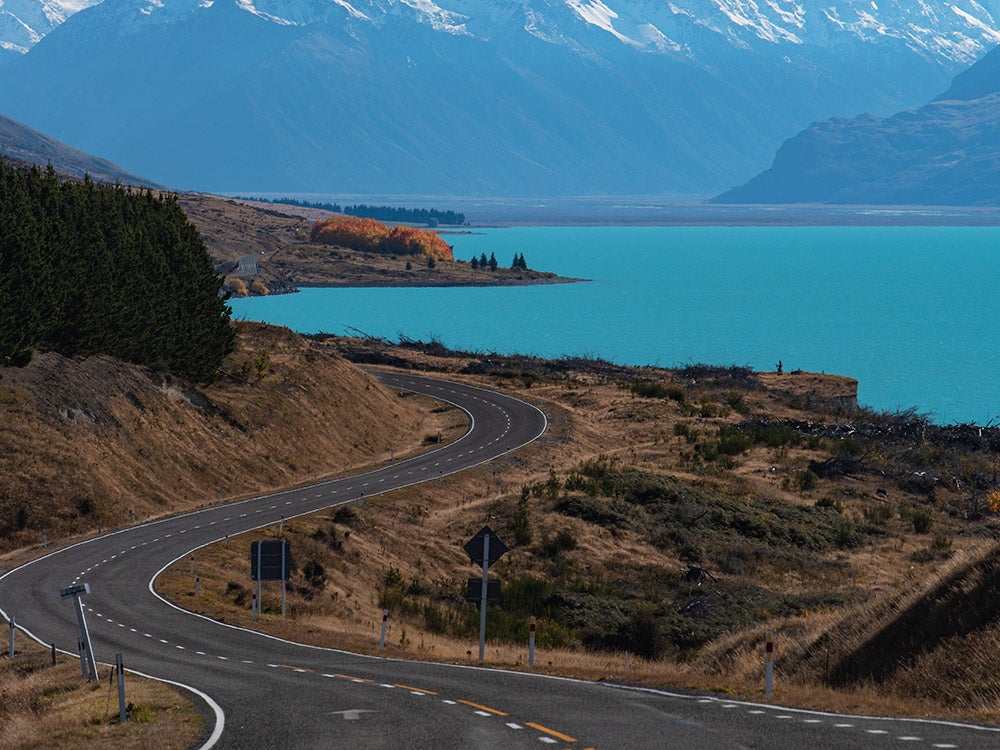 The land of the long white cloud is home to an unmatched diversity of landscapes. Glaciers, rain forests, sandy beaches, and quaint villages make it a dream vacation for anyone, but its smooth pavement and sparse population make it a paradise for the motorcyclist. New Zealand seems more exotic than other English-speaking countries, but remains a less daunting prospect than many far-flung destinations. Always nice to not have to rely on Google Translate to order a burger.

RELATED: How to plan a motorcycle trip 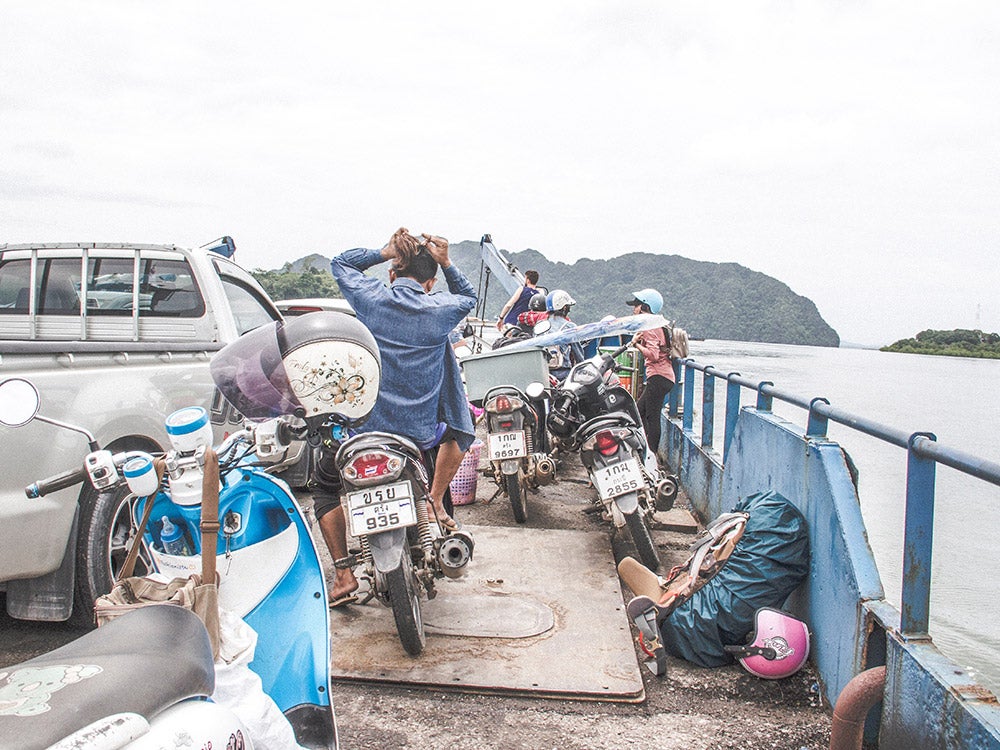 Thailand. By boat and cycle.

Sure, have your beach vacation. But then rent a bike and head north to the mountains for miles and miles of twisty roads. Thailand is as exotic as it seems. With a hospitable culture and, uh, Thai food, you really can’t go wrong. As in many other southeast Asian countries, congested urban areas mean you’ll be one of a zillion people on two wheels. Blend in with the crowd. Ride a motorcycle.

For our non-American readership, it should be said that the US is a great place to ride a bike. Ride the cycling meccas of California and the southern Appalachians; visit the Barber museum in Birmingham, Alabama; and the Harley-Davidson museum and factory in Milwaukee. Catch a down-home flat-track race at a middle-of-nowhere fairground. Wherever you wind up, there’s a road of note. For riding a motorcycle, the US offers an experience as vast as its borders.

Have a favorite place to ride a motorcycle? Tell us your story.