At $1,807, the Honda Navi is the perfect starter motorcycle for a beginner

By employing a continuously variable transmission, it requires no shifting. Here's what it's like to ride. 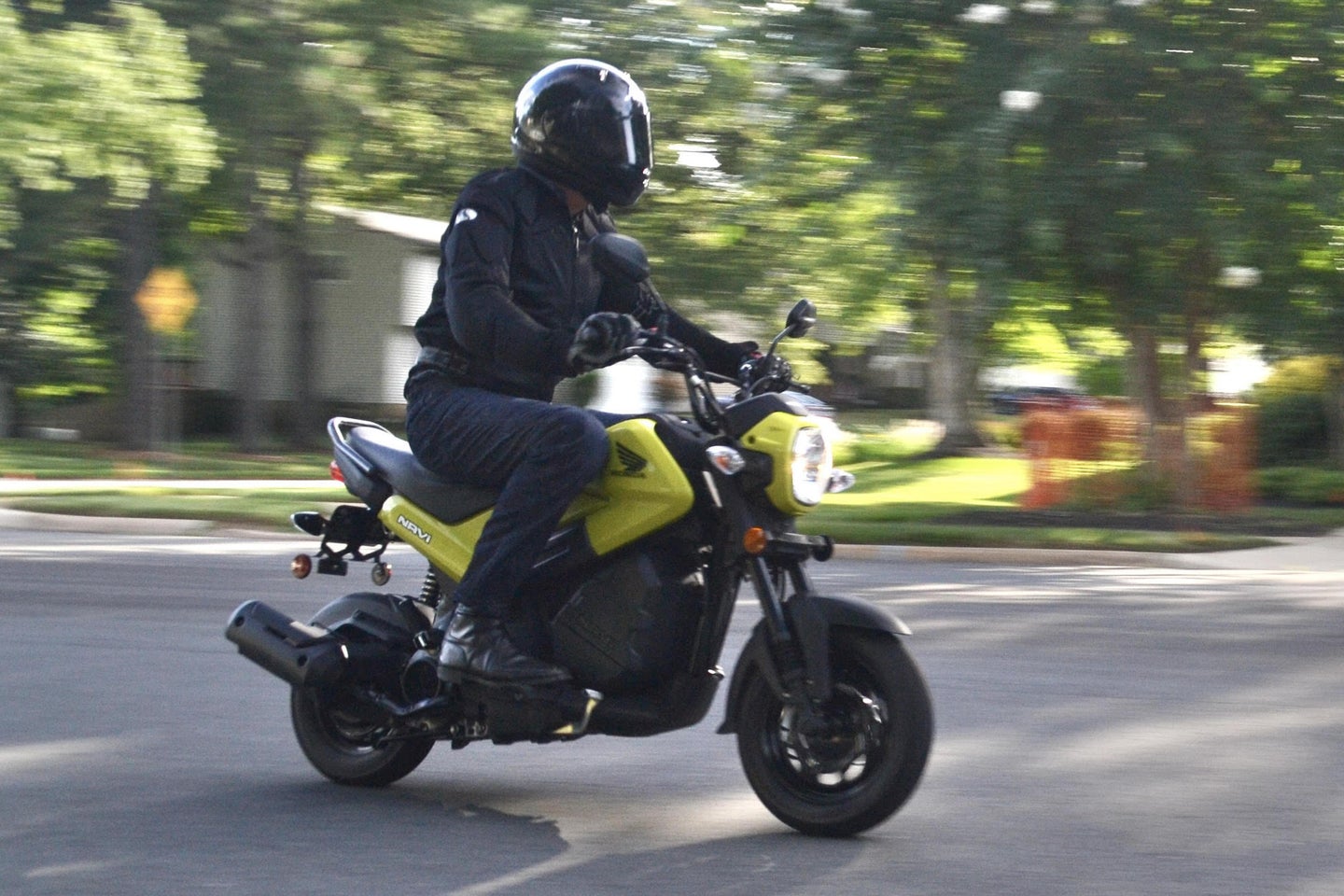 Honda has traditionally cultivated strong grassroots support for aspiring motorcyclists, with novice-friendly scooters and minibikes like the Cub and Trail 50. In recent years, the company, like the rest of the industry, has focused on pricey machines catering to veteran riders with disposable income. But the 2014 debut of the delightful Grom minibike demonstrated abundant demand for something smaller and friendlier, with global sales of more than 750,000 bikes.

Now Honda has topped itself with something friendlier still. In truth, the 236-pound Navi is a glorified Activa scooter, with the same 7-horsepower 109-cc single-cylinder engine and continuously variable transmission.

But it has motorcycle looks and a lockable plastic storage box where a motorcycle’s engine would usually be, lending the Navi the look of an electric motorcycle. And with a price tag of just $1,807, which is less than half the price of the 10-hp, manual-shift Grom, the Navi is easily accessible for many would-be beginners.

Let’s clarify what we’ve got here. The Navi wears a license plate, and it has a headlight with high and low beams, taillight, turn signals, horn, and electric starter. It is street legal as a real motorcycle. It features a regular motorcycle speedometer and handlebar-mounted controls. There’s also an old-school kick starter, if you want to channel your inner Hell’s Angel.

Unlike dirtbikes that some riders use for learning to ride, the Navi is not well-suited to riding off-road. Even yard use feels like a bad idea, as the street tires have poor grip on grass, and the suspension has very little travel (3.9 inches in front, 2.8 inches at the rear), especially when compressed by the weight of a full-size adult onboard. It really needs to stay on smooth pavement or at least gravel. And speaking of grass, our model came in Grasshopper Green, while Red, Nut Brown, and Ranger Green are alternative colors.

Despite all these “real” motorcycle attributes, the Navi doesn’t have a gear shifter or a clutch handle. Riding away from a stop is as simple as twisting the right handlebar grip, just like on a scooter. With an adult rider, you’re going to probably twist the throttle all the way open until the Navi reaches your target speed.

In my neighborhood, it is the perfect toy for cruising around at 25 mph; I’ve been able to connect surface streets between neighborhoods to cover a decent area around without getting onto any bigger roads. It is purely a coincidence that there’s a Baskin-Robbins in the next neighborhood’s shopping center to serve as a popular destination!

I ventured onto one bigger road briefly, to test the Navi’s top speed: it reaches 47 mph, but it isn’t happy doing it. The tiny 12-inch front and 10-inch rear wheels provide great maneuverability in the neighborhood, but the ride gets busy—a little hectic and unstable feeling—at near-highway speed.

Front and rear drum brakes are cable actuated, just like on classic motorcycles of the mid-20th century. Unlike those antiques, however, the Navi’s brakes actually provide crisp response to a squeeze on the brake handle, and the bike’s low speed and light weight mean that the superior heat dissipation of disc brakes is not needed.

The brakes also provide a solution for the Navi’s CVT transmission. Riders park traditional, manual-shift motorcycles in gear to prevent them rolling off their kickstands when parked on a slope. The Navi’s CVT won’t hold the bike in place when it is shut off, so instead there’s a parking brake to hold it still. (A CVT is the kind of automatic transmission that is familiar to scooter riders. It varies the drive ratio on the fly, with no discrete gears, so the engine speed changes depending on how aggressively the rider is twisting the throttle grip while the Navi gathers its speed deliberately.)

The Navi rolls on cheap, car-like stamped steel wheels that bolt on with four lug nuts, just like a car. This is instead of the usual motorcycle spoked aluminum wheels, and for this bike, with its low power and speed, these wheels are absolutely fine.

Something to keep in mind, in a country where some people resist simple measures such as helmets, is that while the Navi doesn’t go very fast, riders are still exposed to other, bigger and heavier vehicles, so proper safety gear for every ride is a must. While the Navi is so much fun that it is reflexive to think of it as a toy, it is important to use a helmet, shoes, and long sleeves and pants. Shorts and flip-flops are not riding attire, even for the Navi.

Also, you’ll need to get a motorcycle license to ride the Navi in most places. But look for motorcycle riding schools to embrace Navis as their training bikes, so you’ll be able to get a head start familiarizing yourself with the bike while earning your license.

Early returns are already in, as Navi sales have been red hot, and Honda says the bike is on track to be the top-selling street bike in the US. The reasons for its popularity are obvious— low price, ease of use, fuel efficiency, and more—so I wholeheartedly endorse the Navi as not only a great starter bike for novices, but a fun toy for experienced riders to putt around their neighborhoods.

If all goes well, the next thing they know, Navi riders will be back at the Honda dealer to swing a leg over something like the CB300R or CRF300L to try them on for size as fuel-efficient commuter bikes and weekend playthings. Just like how the old Trail 50 put riders on a path to the company’s CB350 back in the day.