This new Russian rifle is designed for combat beneath the waves

The weapon works both on land and underwater, a dual-purpose device for a rare type of fighting. 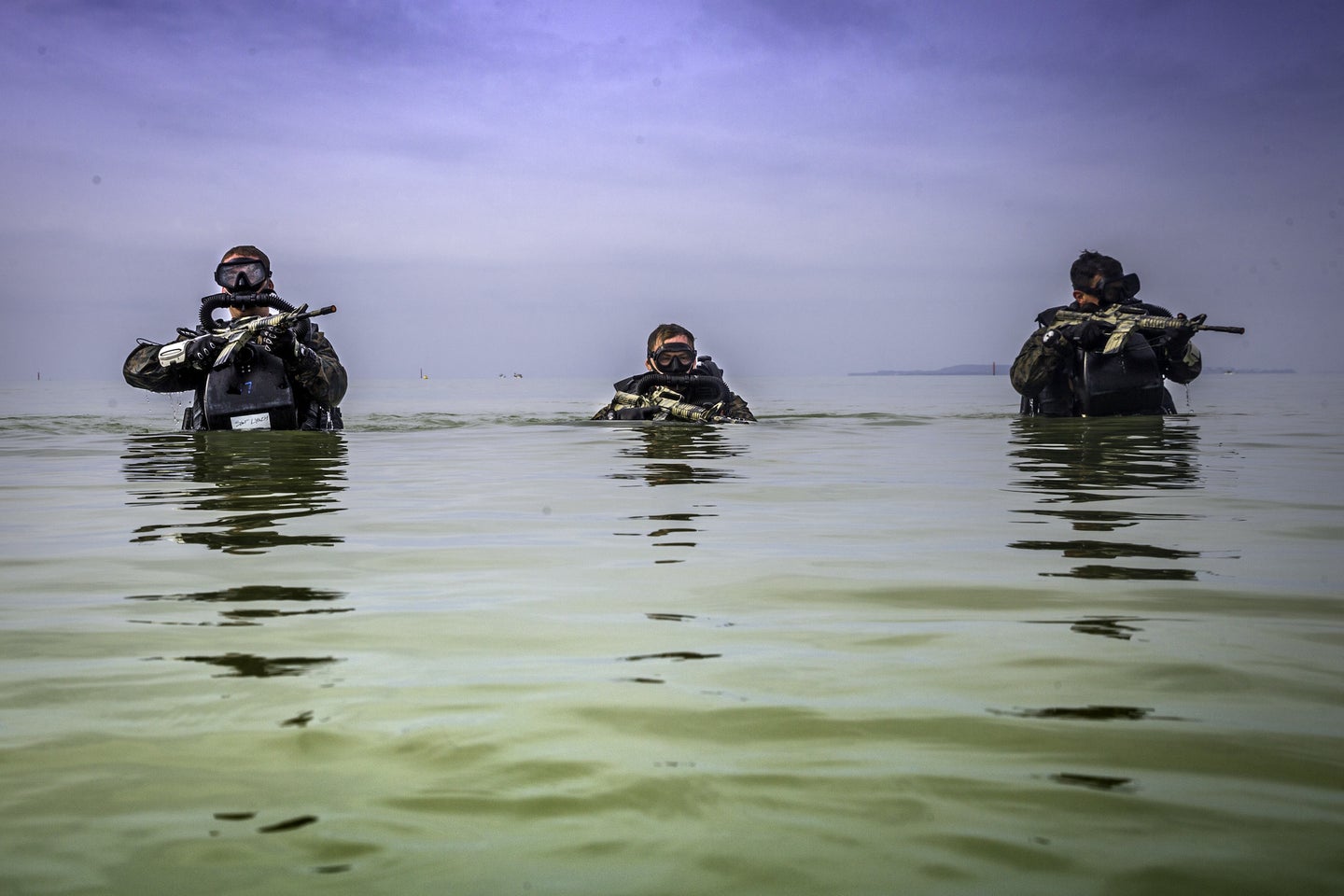 US Marines on a patrol during a course in Japan last year. Cpl. Savannah Mesimer / US Marines
SHARE

Humans are not naturally equipped for fighting underwater. While advances in everything from scuba tanks to goggles to underwater vehicles made it possible for people to fight beneath the waves, it has still been hard to put actual weapons into the hands of the people doing the fighting. Underwater rifles, built specifically to launch a projectile through dense water, are one way to arm a submarine soldier, but they present a separate problem: underwater rifles are ineffective above the surface, and a person hoping to fight on land will need to carry a second gun.

To help solve this unique problem, Russia has developed specialized dual-use underwater and above-water rifles. The latest of these is the “dual-medium ADS assault rifle” created by High-Precision Weapons Company, part of Russian defense giant Rostec. With a magazine located behind the trigger and handle (the “bullpup”) configuration, the rifle is compact. Its barrel is fitted for 5.45x39mm bullets, the same kind commonly found in the AK-74 rifle and in use across the world today. In addition, the ADS can load a cartridge of special 5.45x39mm bullets designed to fire entirely underwater.

The latest iteration of the ADS rifle appeared at the International Maritime Defense Show in Saint Petersburg, Russia, held in late June. The design has been in the works for some time, with the ammunition formulated in 2005 and early production models reportedly undergoing field trials in 2009.

The new version is now under mass production, making it a somewhat curious weapon. Underwater gunfights are an especially rare kind of combat. Even if they are undertaken by special forces more than regular soldiers, it is still at heart a novel tool for a subset of missions.

[Related:The Royal Navy’s robotic sub will be a test bench under the sea ]

What makes it somewhat less remarkable is that it comes from a long line of underwater rifles. Most famously, the Soviet Union’s APS underwater rifle was built to fire long steel darts, at a range of 100 feet at a depth of 16 feet underwater. (With underwater weapons, their range is strongly affected by depth, decreasing as they go deeper.) On land, the weapon was limited to a range of about 330 feet, with the big caveat that because the gun’s barrel was not rifled, it was not terribly accurate.

That underwater range, short even in shallow depths, highlights the kind of fighting a gun like this is good for. It’s a close-range tool designed to absolutely stop a person or animal near the diver. Swimming infiltrators, equipped with explosives that can attach to the hulls of ships, have functioned as saboteurs in wars for decades. “Frogmen,” commandos with scuba gear and flippers (hence the name), date back to World War II.

A rifle that can stop a frogman underwater in a harbor, or fight off attackers on a dock, is a useful tool. It is also one that could be used against animals trained for military purposes, like sea lions, dolphins, and beluga whales. While reports of actual combat between trained dolphins and armed frogmen are hard to source, the US Navy did deploy trained dolphins for harbor security in the Vietnam War. Both the United States and the Soviet militaries trained animals for military porpoises—that is, purposes—throughout the Cold War. More recently, in 2019 a beluga whale believed to be trained by the Russian military was discovered off the coast of Norway.

Rifles like the ADS go some way to making humans slightly more adept at surviving combat underwater. Like the existence of frogmen suggests, it’s a tool that brings humans one step closer to being masters of truly amphibious warfare.