Giant squids, blind crabs and effective atomic destruction all hide underneath the ocean. Far from prying eyes or satellites or... 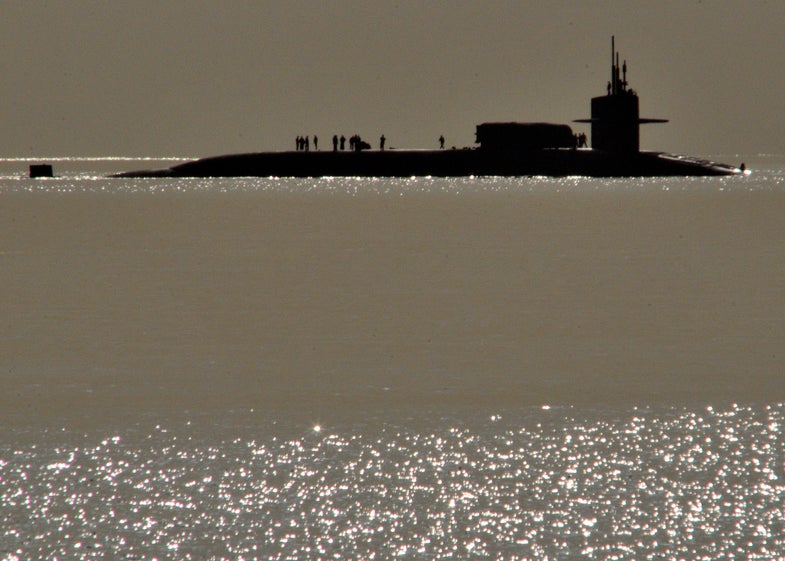 Giant squids, blind crabs and effective atomic destruction all hide underneath the ocean. Far from prying eyes or satellites or reconnaissance planes, the depths of the sea are the most flexible space to effectively hide military power — though it took more than 100 years for the military to take advantage of the capability. The earliest submarines were human powered and designed to unobtrusively attack ships close to shore or in port and had a poor track record of success. Turtle — the hand crank powered submarine created by visionary Yalie David Bushnell in the 1770s — was never able successfully sink a ship.

The track record did not improve. About a hundred years later every sailor who sailed on a mission aboard CSS H.L. Hunley — the Confederate submarine credited with the first ship kill in 1864 after sinking the Union sloop USS Housatonic — died But slowly the idea of a submarine evolved to become a close-to-shore or littoral (pronounced like literal as in you’re literally close to shore) defense measure.

Defense dominated submarine thinking until the Germans in World War I ventured from their shores to blockade the British Isles. World War II brought better submarines with longer ranges. Even with the technological advancement, Germans, Japanese and the American submarines of the war spent more time on the surface than under the water to allow the ships to operate — scrambling to dive when spotter planes or ships came near.

As detection of submarines improved, the Russians and the Americans accelerated their research to develop boats that would spend most of their time underwater. Much of the research was based on innovations the Germans developed in the later part of the war.

The German Type XXI submarine — more sophisticated than any of the Allied boats — was reverse engineered by both countries and the technology was inserted into later attack boats. Technology from the XXIs — like snorkels to refresh the air in the boat and new types of sensors — led up to the next major step in submarine development. In 1955, the atomic powered USS Nautilus set a record for remaining under water on a trip to Puerto Rico. The trip did two things: threw down one (of several) technological gauntlets to the Soviets during the Cold War and completely changed how submarines could be thought of as weapons. Hyman Rickover, perhaps the US Navy’s crankiest admiral (he called Edward R. Murrow and Diane Sawyer both dumb, to their faces in interviews), pioneered the idea of the nuclear submarine and guided the Nautilus program.

To then Capt. Rickover, the military implications of a reactor in a submarine were obvious.

An atomic steam reactor would be able to drive the ship without air — bypassing the need to surface for weeks at a time. The limiting factor to a submarine’s ability to stay out became food for the crew.

Nautilus’ first journey in 1955 was a Sputnik-level shock for the Soviet underwater set and they followed up two years later with the launch of K-3 Leninsky Komsomol. While atomic submarines gave the Russians and Americans the ability for attack boats to play consistent away games the time the boats could spend under the water also created a new strategic weapon — the nuclear ballistic missile submarine.

Boomers (submariners have a dark humor streak) combined the geopolitical tension between Russia and the U.S. into a neat package — the rockets of the space race, atomic annihilation and Cold War cloak and dagger. The existential threat of the submarine launched ballistic missile from nowhere, with no warning became grist for the pop culture mill (The Hunt for Red October is by far the best example). U.S. and Russian submarines suddenly came in largely two flavors — the hunters (attack boats) and the hunted (boomers).

The war was fought mainly in the Atlantic through feints and stalking and listening. That dynamic stood until the collapse of the Soviet system in the early 1990s. During the last gasps of the Cold War, the U.S. was developing the one of the fastest, deepest diving and durable attack boats in human history.

The Seawolf class was designed with the primary purpose of hunting Soviet boomers in the open ocean but after the Cold War, the submarine game changed again. After building three Seawolfs, the U.S. submarine force began a new class of submarine that would spend more time back in the littorals than the open sea.

The U.S. Virginia class boats specialize in lurking off coasts as intelligence gatherers and as platforms for special forces troops. Meanwhile the other nuclear player, the Russian submarine force, suffered neglect. They’ve been unable to retain a consistent nuclear deterrent patrol for years but still maintain a strong understanding of nuclear submarines and are developing new types of submarines.

While the Russians and the U.S. hang on to atomic power for submarines, other countries have focused on improving air independent propulsion for the diesels. AIP uses a mix of onboard chemicals to allow the diesel engines operate without having to snorkel. The lack of a two state atomic death match has placed the emphasis back on the diesel ships that operate closer to shore. German, Swedish, French, Russian, Spanish and other export submarines are part of a de facto submarine arms race in Asia — mainly on overlapping claims in the South China Sea.

Other countries, like China and India are developing their own indigenous submarines — making the playfield of the silent services more crowded closer to shore.