Violence on the edge of utopia 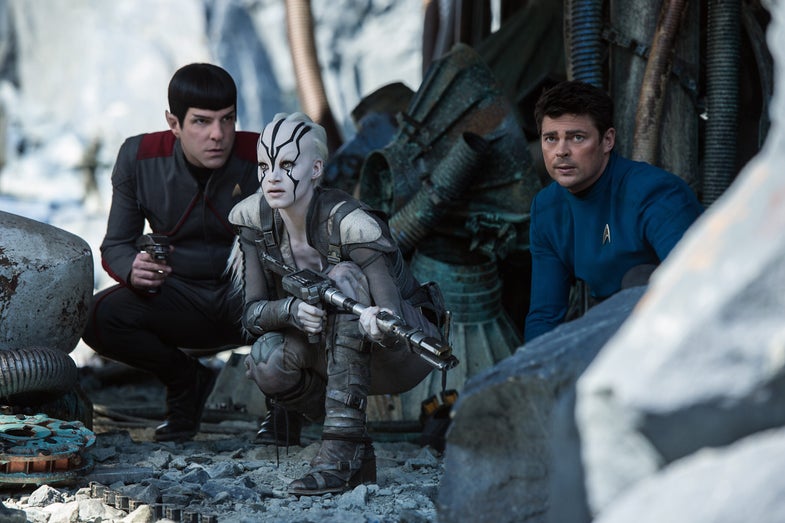 “This is starting to feel a bit episodic,” bemoans Captain James T. Kirk, played by Chris Pine, early on in Star Trek: Beyond. Kirk is returning from a minor diplomatic mission, an attempt at Federation-negotiated peace between two minor civilizations. The joke is a nod to Star Trek’s long and enduring history as a staple of television. The Original Series premiered 50 years ago, and the sixth television show in the franchise, Star Trek: Discovery, is set to debut on CBS in January, 2017.

Kirk’s quip is also a nod to one of the more common complaints about the Trek universe, the seemingly small tasks of peacekeeping within a generally tame universe. The 13th film adaptation of the world and the third in this reboot, Beyond pushes beyond episodic repetition to place the Enterprise in a crisis outside peaceful space, in a dangerous frontier. It isn’t exactly a war story, but it’s very much a story about war.

So is all of Star Trek.

Other venerable science fiction franchises set their stories in the war itself. Star Wars puts the action in the title, and through seven movies of highly variable quality, tells a tale about the family at the heart of a galaxy-shattering war. Battlestar Galactica opens with renewed hostility from a war people thought was over, and then tells the tale of fighters on the run, of refugees, and hostile occupiers.

Star Trek, with a few notable exceptions, does not give most of its dramatic weight to what happens during war. War in Star Trek either took place in an imperfect past or exists as a possible threat to a future perfect. The Federation of Planets governs a mixture of races, species, and civilizations in one utopian structure, and from the start features those aliens working alongside humans.

Series creator Gene Roddenberry never imagined humans would get to this explicitly utopian future without some great calamity between the present and the 23rd century. In the movies and shows, characters refer back to the Eugenics Wars (set during the 1990s) and a World War III (set around the 2020s). In the aftermath of these devastating wars, a human engineer discovers faster-than-light travel and humanity is greeted by a benevolent, advanced civilization: the Vulcans.

It’s a fantasy, but a deliberately chosen one. When Star Trek: The Original Series first premiered in 1966, the world was entering uneasily into the third decade of the Cold War. The Cuban Missile Crisis just four years prior risked global nuclear annihilation through brinkmanship and miscommunication. Putting forth a world where humanity, together with enlightened others, explores the stars in the name of peace is a bold statement about futures other than radioactive demise.

Utopias, even the most pleasantly conceived utopias, are boring from within, so Star Trek gave use a band of explorers and sent them to the edge of danger. If the Federation is at peace, then the final frontier is the home of war. In the Original Series, that means frequent hostile encounters with the Klingons, a galactic rival with stealthy spaceships and a shoot-first mentality.

Yet by the time of The Next Generation, the Federation and the Klingons are at peace, through negotiations painstakingly undertaken by the original Kirk and company (even after they were nearly derailed following sabotage by radical hardliners within the Federation). Picard’s crew in The Next Generation repeatedly risks it all for diplomacy, forging or maintaining peace in the face of mortal danger.

It is Deep Space Nine, set not on a ship but at a frontier outpost, that gives the Federation its greatest existential threat: the hostile Dominion. Deep Space Nine deviates sharply from the optimism of the earlier series. What is remarkable about the Dominion War arc, besides the quality of its writing, is the depths to which protagonists go to preserve the dream of Utopia. It is a dark turn that remains an outlier in the Star Trek universe, where a supposed utopia debates engineering a plague to eradicate its enemies. War is deeply messy, and the Dominion War hides none of that.

The 2009 cinematic reboot of Star Trek, as well as the two films that followed, are less about negotiating peace than they are about understanding how the closest thing a utopia has to a military responds to the threat of war.

One enduring feature of Star Trek is the limited range of weapons used by Starfleet. Phasers and Phaser rifles, with kill and stun options, remain the standard firearm. Spaceships use lasers and torpedoes, mostly limited to within visual range. Even when the crew in Beyond creates a new electromagnetic weapon, it is a minor reworking of existing technology and not a new grand innovation. Technology everywhere else advances: universal translators get better, communicators are miniaturized, and in Beyond Dr. McCoy struggles to make do with much older medical equipment than he’s used to, but the weapons stay the same. Starfleet may be armed, but it isn’t a military looking for the most effective killing devices. So long as the weapons on hand still work, there doesn’t seem to be a lot of drive to improve or replace them with newer, deadlier tools.

The Federation’s enemies are not so limited. The 2009 reboot features a weapon of planetary destruction in hostile hands. Into Darkness from 2013 features part of the Federation secretly developing long-range missiles for targeted killing and building a deadly, dangerous space Dreadnought to fight a new war. In a predictable turn of events, these new weapons are instead turned against the Federation by rogue agents, and true to form, the crew of the Enterprise defeats the danger without resorting to new weapons.

In Beyond, the Enterprise crew encounters a deadly drone swarm, and still faces it armed only with phasers, torpedoes, and their wits. There is no technological arms race, no strong emphasis on new weapons for the Federation. Our protagonists change how they fight, and not the tools they use for fighting, to face the danger.

Starfleet exists on the edge of danger, is armed for it, and responds to it with force, but does not see itself as a military. This wasn’t always the case.

WARNING: Star Trek: Beyond spoilers below.

The contrast between a military at war and a fleet maintaining peace is highlighted especially by the reveal of Beyond‘s villain in the third act. Instead of the alien warlord he appears to be, Krall, played by Idris Elba, is in fact Balthazar Edison, a centuries-old veteran of humanity’s early wars in space. After a military career spent fighting aliens, the Federation establishes peace between several civilizations, and the old warships are instead turned into vessels for exploration. In recognition of his service, Edison is given command of the USS Franklin. Yet peace doesn’t sit right with Edison, and after crash-landing on a hostile and alien world, Edison discovers new technologies for war and prolonging his life.

“It is time the frontier pushes back,” proclaims Krall/Edison, as he sets in motion a plan to shock the Federation out of peaceful complacency. Yet when he reaches the Yorktown space station he sets out to destroy, he finds it far more technologically advanced than he could imagine. He proceeds to attack the station, but for a moment he is blinded by an uncomfortable truth for a soldier that never gave up the gun: peace accomplished far more than the wars he hoped to continue.

Star Trek, as a series, is about that governing. It’s about making sure the wars don’t happen, and showcasing the absolute tragedy that results when they do. At the end of Beyond, Kirk is over his early exhaustion with the episodic nature of diplomacy among the stars. With great enthusiasm, he leads the ship into the frontier once again, continuing the great work of peace on the edge of danger.