Tactical equipment without a strategic goal. 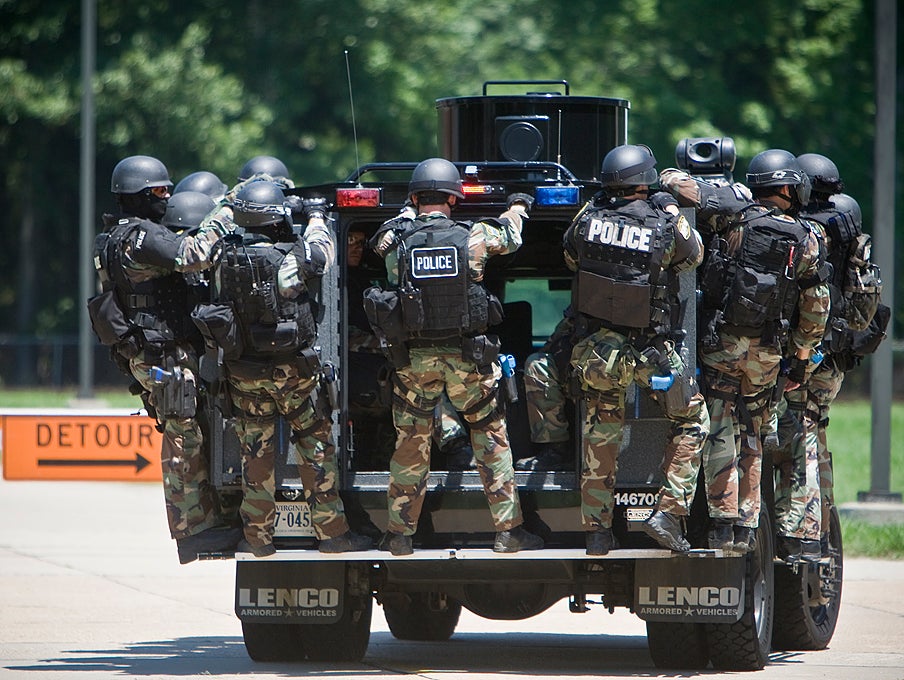 Virginia Beach SWAT team members ride the running boards of an armored van to get into position to assault Building 1155. NASA/Sean Smith
SHARE

Following the fatal police shooting of teenager Michael Brown in Ferguson, Missouri last Saturday, a protest movement broke out in the small town. Police from St. Louis County responded, showing up with body armor, gas masks, rifles, camouflage uniforms, armored cars, and tear gas. This excessive show of force, combined with gear that looks very military, has lead to widespread outcry against police militarization, including some objections from veterans themselves. Here’s a look at some of the gear on the ground in Ferguson and how it made its way from military service to police armories.

What it is: A powerful sonic cannon, the LRAD blasts beams of sound at people up to 3,200 feet away.

Original Military Use: An alternative to shooting a bunch or making something explode, LRADs have found a use on both land and sea. For naval or commercial vessels, they’re great at deterring pirates. At military checkpoints on land, LRADs force vehicles to slow down or stop, and they do so more calmly than shooting would.

Ferguson Use: Keeping protesters away from police armored vehicles.

What it is: A gun that hurls a canister of some type.

Original Military Use: Lobbing small explosives further than troops can throw them. In some situations, less-lethal ammunition is used.

Ferguson Use: Firing flash-bang grenades, tear gas, or other less-lethal munitions to try and forcibly disperse a crowd. Worth noting that while these are less-lethal weapons, they can still cause serious harm. During a SWAT raid in Georgia, a flash bang grenade fell into a toddler’s crib and put the infant into a coma. The toddler appears to be recovering.

Original Military Use: Making it harder for enemies to see troops, as they blend into the surrounding environment.

Ferguson Use: Looking like the military. Because police are not expected to come under hostile fire from an enemy force at any moment, there’s very little need for them to dress like their surroundings. According to both journalist Radley Balko and a report on police militarization by the ACLU, the major effect of military uniforms is an ego boost for the cops wearing them. Balko quotes a letter to the editors at Washington Post from retired police sergeant Bill Donelly: “One tends to throw caution to the wind when wearing ‘commando-chic’ regalia, a bulletproof vest with the word ‘POLICE’ emblazoned on both sides, and when one is armed with high tech weaponry.”

What it is: A relatively bulletproof vehicle. About half of these in police use are retired Mine Resistant Ambush Protected (MRAP) vehicles once used by the military in Iraq and Afghanistan. But there are plenty of other models from older wars in use, as well as some specifically made for police purposes.

Original Military Use: Keeping troops safe in gunfights, by providing a sturdy and armored way to either get more troops to the fight or get wounded people out of danger.

Ferguson Use: There are situations in American policing where an armored car might be needed in a gunfight between law enforcement and criminals. That was not the case in Ferguson, where the largely peaceful protesters were armed mostly with signs and chants.

What it is: A tool that puts holes in people.

Original Military Use: Killing people far away, doing so accurately, and with a minimum number of shots fired. If a crowd situation turns into a battle, snipers can pick out more threatening people farther away from where they are.

Ferguson Use: Intimidation? It’s hard to imagine a scenario during nonviolent protests, or even minor rioting, that necessitates the use of a scoped rifle.

Rare are the situations where it’s advantageous for police to have armored cars, camouflage, grenade launchers, crowd control weapons, and sniper rifles. Such a show of tactical equipment isn’t just excessive, but it can escalate a relatively calm demonstration into something more volatile and unsafe.