This year’s Peace Mission 2014 is the largest of the annual Shanghai Cooperation Organization (SCO) “anti-terrorist” military exercise to date.... 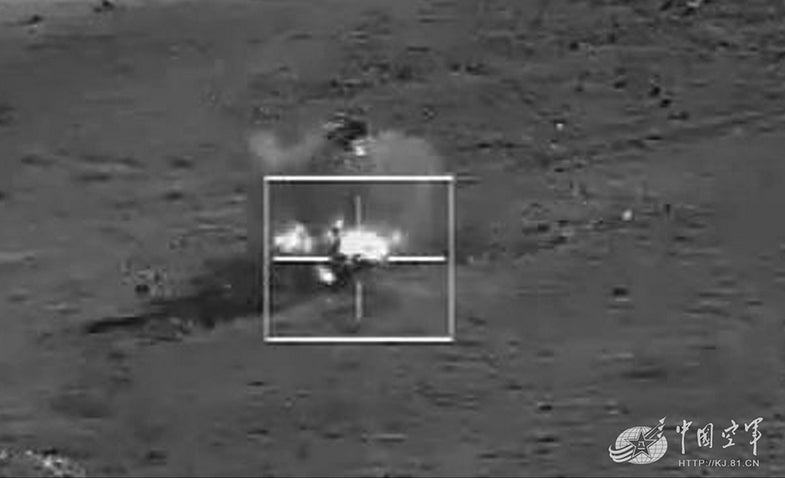 While this looks like it could have been taken from an American Reaper drone in Afghanistan, this is actually a Chinese CH-4 drone launching an HJ-10 anti-tank missile at a simulated terrorist bunker during Peace Mission 2014. This marks the first Chinese display of an armed UAV capability in an open international arena, perhaps showing a high Chinese willingness to use armed unmanned platforms in conventional warfare. http://kj.81.cn
SHARE 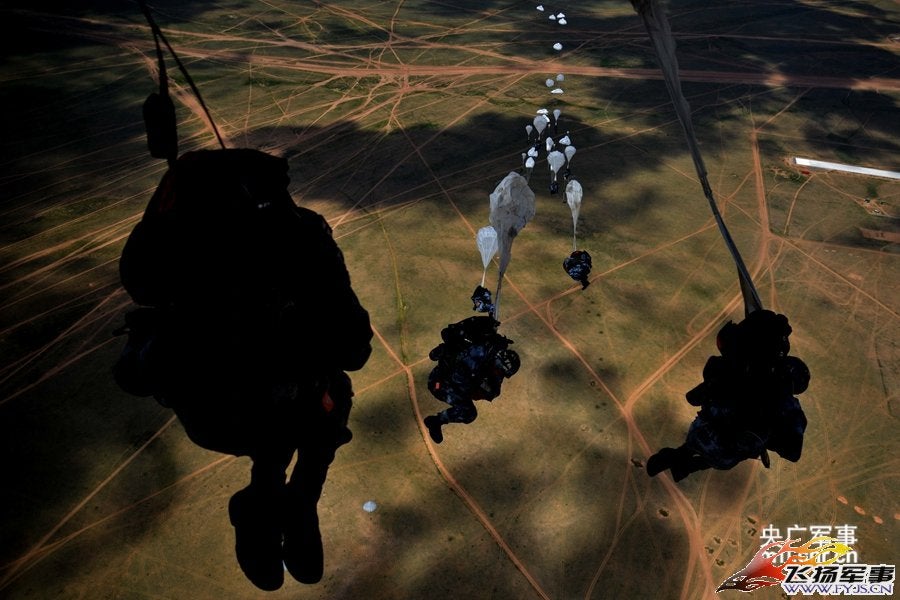 ZBD-04A IFVs on the MOve

Chinese ZDB-04A IFVs, upgraded with better armor, advance on “terrorist” forces (which are incidentally also armed with tanks and artillery).

The exercise was notable along a number of lines. At a time of growing tension between Russia and the West, it affirmed the value of the SCO and the China-Russia partnership.

Along these lines, the scenario chosen for the exercise was timely. While described as “anti-terrorist,” the opposing force (OPFOR) was described by Xinhua News Agency as “externally back separatists using terrorist incidents to launch a coup and divide the nation” (IE, how Russia has described events like EuroMaiden in Ukraine). In keeping with this theme, the OPFOR (provided from the PLA’s 6th Mechanized Division), didn’t feature typical terrorist tactics and technologies, such as IEDs, but instead utilized heavy equipment like ZTZ-88 main battle tanks and PLZ-83 self propelled howitzers. 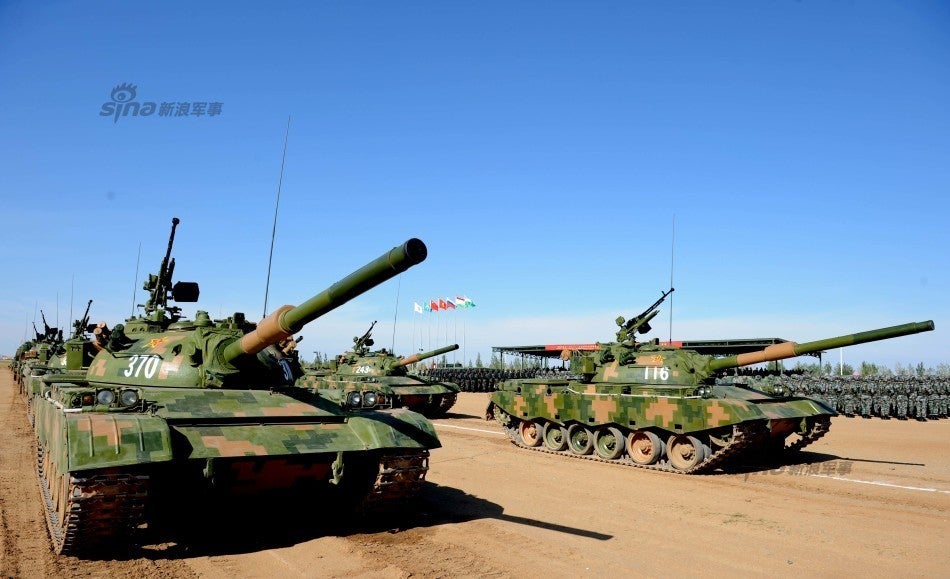 These older ZTZ-88 tanks played the role of the opposing “Blue Force” in Peace Mission 2014. While western militaries have traditionally regarded terrorists as irregular infantry forces, the SCO is obviously ascribing terrorists to posses tanks and reasonably modern artillery equivalent to PLZ-83 howitzers and Type 85 armored personnel carriers. Note: for eastern militaries like China and Russia, “Blue Force” is the hostile force during military exercises, while NATO terminology ascribes that hostile force as ‘Red Force”.

Finally, the exercise demonstrated a series of new Chinese military weapons. The majority of the 5,500 strong Chinese ground forces came from the elite 112th Regiment of 38th Group Army, which is based in the Beijing Military District. The 112th is one of China’s most modern mechanized formations, equipped with highly capable systems like the 60 ton ZTZ-99A main battle tank, long ranged PLZ-04 self propelled howitzer and the ZDB-04A IFV. The wargame featured the debut of the ATF-10 LR anti-tank vehicle, which uses the chassis of the ZBD-04A IFV to carry eight ATF-10 anti-tank missiles, with a 10km range. The long range of the ATF-10 would be a valuable tool for supporting infantry in urban and reconnaissance missions, by providing offsite fire support against heavy targets like buildings and tanks. 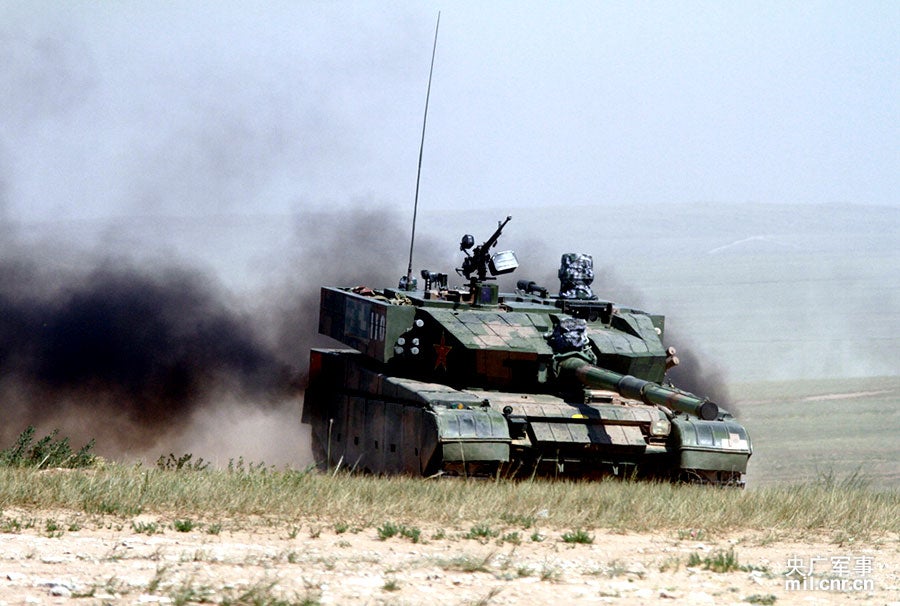 The ZTZ-99A is China’s most modern battle tank and look a lead role in the Peace Mission 2014 exercise. It weighs at over 60 tons, making it the heaviest Soviet style tank (closer in weight to U.S., British and German tanks, actually). Among its modern features is an Active Protection System, like the Israeli Trophy and U.S. Quick Kill, which is housed in the cylindrical box on the turret left (covered in cloth). 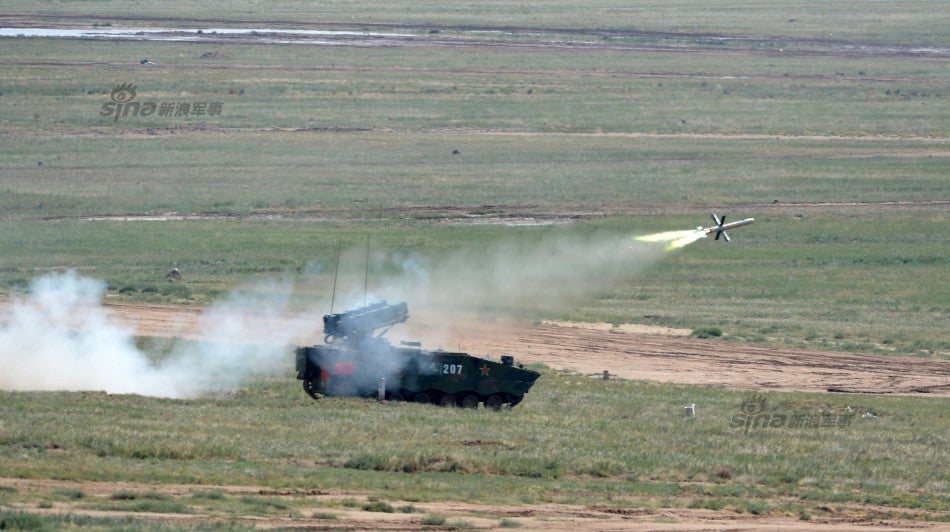 A ZBD-04A anti-tank missile launcher fires a heavy 10km ranged AFT-10 missile (mounting the ATGM launcher on an IFV chassis provides mobility and protection). The wirelessly guided AFT-10 can receive operator corrections to strike at fortified targets like tanks and bunkers, its long range allows the launcher armored vehicle to remain out of danger and provide quick fire support to infantry.

A battery of PLZ-04 self propelled howitzers delivers a devastating volley during Peace Mission 2014. The PLZ-05’s 155mm cannon can delivery satellite, laser and infrared guided shells up to over 50km away.

As with previous Peace Mission exercises, China displayed a plethora of combat aircraft such as Z-19 scout helicopters, J-10 fighters and J-11B heavy fighters. The new Z-10A attack helicopter was spotted, showing it to be equipped with larger and more advanced thermal imaging sensors compared to older Z-10 models. A picture of a Z-8 transport helicopter indicated that SCO forces were practicing air-mobile operations in simulated urban environment. 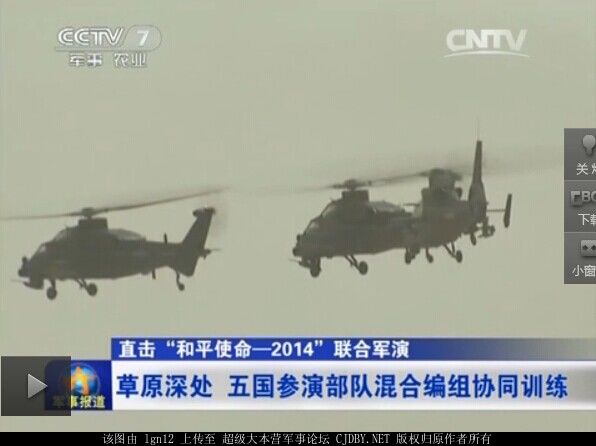 Chinese Z-10 attack helicopters fly in formation at Peace Mission 2014. These are the latest Z-10 variation, with improved digital and infrared imaging sensors over and under the nose, as well as radar warning receivers and MANPADS jamming equipment. 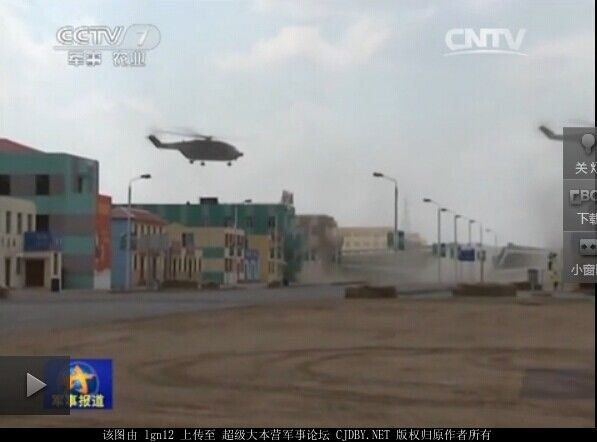 This video screencap shows two Z-8 (only the tail on the one to the right is visible) transport helicopters in the simulated urban environment at the Zhurihe training center. Each Z-8 can carry 27 armed troops, and can deploy them via either fast rope rappelling or in a landing zone. Presumably, the airmobile troops are liberating the capital city from the “splittist terrorists”.

Perhaps the most high profile Chinese weapon was the use of a Pterodactyl UCAV, considered the equivalent of the US MQ-9 Reaper, which bombed an enemy “terrorist” target with an ATF-10 ATGM. The usage of a UCAV in what was actually a fairly conventional mechanized operation is something not yet well integrated in American operations of the equivalent aircraft. It also suggests that Chinese doctrine may be more risk-friendly in employing unmanned platforms against well-armed opponents than American drone use has been so far. 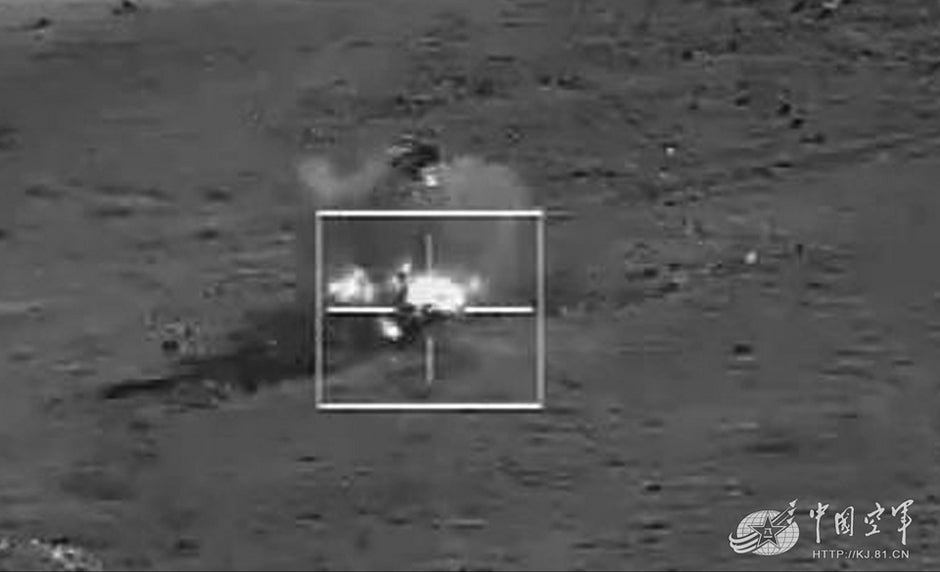 While this looks like it could have been taken from an American Reaper drone in Afghanistan, this is actually a Chinese CH-4 drone launching an HJ-10 anti-tank missile at a simulated terrorist bunker during Peace Mission 2014. This marks the first Chinese display of an armed UAV capability in an open international arena, perhaps showing a high Chinese willingness to use armed unmanned platforms in conventional warfare.