Charging on-the-go is about to get a lot easier for people who drive electric vehicles that aren't from Elon Musk's company. 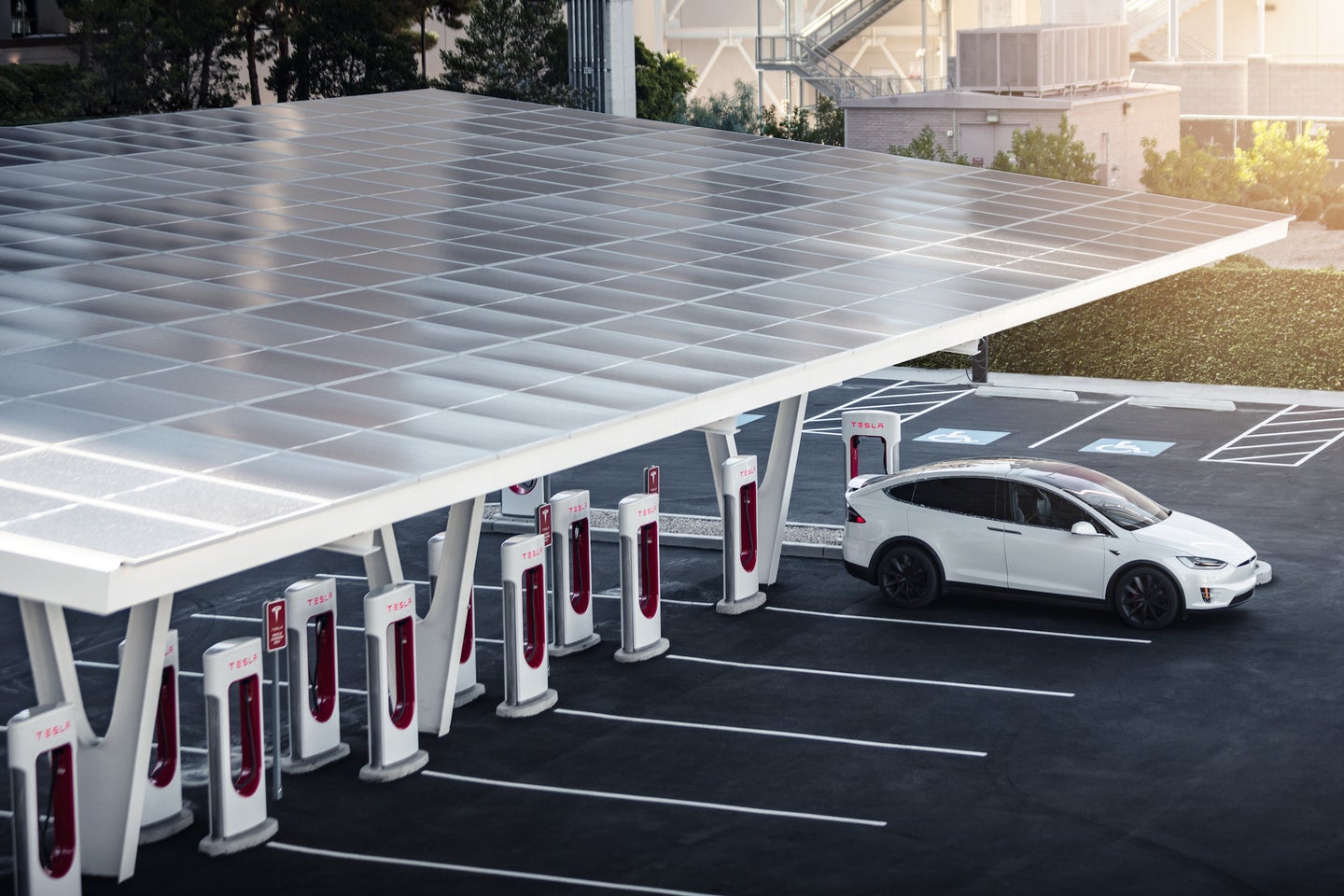 Tesla plans to open its charging stations to other electric vehicles. Tesla
SHARE

Electric cars are on the rise in the United States. Nearly half of all car-buying adults are open to the idea of bringing a battery-powered vehicle into their home, and automakers like Ford are reporting triple-digit sales increases of battery-electric and plug-in hybrid vehicles. But finding a charger on the road, which can be challenging, may soon become easier thanks to electric automaker Tesla: The company recently pledged to open its proprietary charging network to other electric vehicles in late 2021.

While most electric car charging is done in the home, commuters and travelers often need to charge on the go, and will then have to find public EV chargers along their route. There’s just one catch: the charging infrastructure in the United States is still very young, and coming across a place to plug in isn’t as easy as finding a gas station—at least not yet.

Tesla CEO Elon Musk first announced that Tesla was planning to open its network to non-Tesla vehicles via a tweet on July 20, and later expanded upon the idea during the manufacturer’s quarterly earnings call on July 26.

“We’re currently thinking it’s a real simple thing where you just download the Tesla app and you go to Supercharger,” said Musk, referring to the company’s line of fast chargers. “And you just indicate which stall you’re in. So you plug in your car, even if it’s not Tesla.”

Currently, all Tesla Superchargers in the US use a proprietary inlet connector with a form factor that can only be used to charge Tesla-branded vehicles. Other EVs on the market use an open standard like the Combined Charging System (CCS) or less common CHAdeMO connector. This means that the Supercharger inlet cannot be physically inserted into a non-Tesla vehicle to charge it.

[RELATED: What to know before you buy an electric vehicle]

The solution involves a small new piece of hardware. Musk says that the company will start selling a Tesla-designed adapter which sits between the car and the Supercharger, which will allow owners of non-Tesla vehicles to use the Supercharging network along with the Tesla app to charge their vehicle.

The expansion of charging networks in the U.S. is reaching a critical tipping point. As more automakers move towards electrification, the need for additional chargers is predicted to grow at an astronomical rate. In fact, President Joseph Biden recently called for providers to reach a milestone of a half-million chargers installed by 2030 and set out to establish an infrastructure funding bill to make the target a reality. But recent bipartisan compromises seek to cut the available funding for EV charging infrastructure expansion in half, meaning that charging may get a bit more crowded before it gets better. Since Tesla controls a large portion of the total chargers deployed today, allowing other vehicles to charge on the Supercharging network could ease the crunch.

The difference between a charging station and a charger

There are currently 43,525 public charging stations across the nation, according to the US Department of Energy. However, only 5,260 of those stations actually have DC Fast Charging—which is necessary for EV drivers to quickly top off their battery mid-trip—readily available. The remaining 88 percent of charging stations have slower charging speeds that are meant to charge an EV’s batteries over longer periods of time, such as overnight at a hotel. That’s obviously not ideal if you just need some quick juice.

[RELATED: Electric vehicles have come a long way since the 1890s]

Confusingly, a charging station refers to a physical location that usually has multiple individual chargers where multiple vehicles can charge near one another simultaneously, like how a gas station has multiple pumps. For example, a total of 18,875 fast chargers exist, but they are distributed amongst those 5,260 stations.

The total number of chargers described by the Department of Energy includes 1,074 fast charging stations built by Tesla. And the good news is that each of those has approximately five times the number of average chargers per station—10 cars as opposed to a non-Tesla station’s average of 2 cars. This means that Tesla’s Supercharging network makes up around 20 percent of all stations and over 56 percent of all total chargers on all networks today, but only Tesla vehicles can charge at these locations. With Tesla offering to open its charging stations up to other automakers, the ability to charge away from home becomes significantly easier for owners of vehicles made by other brands.

It’s a win for non-Tesla owners

This proclamation was met with mixed feelings from Tesla owners, who fear that opening the network up to non-Tesla vehicles will cause even more congestion. Tesla’s charging stalls have appeared online during busy travel times like Thanksgiving, when lines overflowed out of parking lots while vehicles waited for chargers.

Musk says that Tesla plans to address this by adjusting the network’s pricing, increasing the cost to charge when the network is “jam-packed” in order to deter unnecessary charging. Likewise, vehicles that charge more slowly due to technological constraints will also face higher costs, because the longer a vehicle charges, the longer the wait for another vehicle becomes. This is also expected to improve as Tesla continues to aggressively roll out additional Superchargers to offset the increasing amount of cars on the road.

As of now, Tesla hasn’t revealed an exact timeline for when it plans to expand its charging network to non-Tesla vehicles. However, Musk estimates that it will begin rolling it out before the end of 2021.

Much like hot dogs and buns, the number of electric vehicles on the road will never quite be equal to the number of public chargers. That isn’t necessarily a problem, especially as the primary means of juicing up is accomplished at home. And as the network continues to grow relative to the number of new EVs on the road in the next decade, pain points like congestion will hopefully become a thing of the past.