So What If The Tesla Model S Is No Longer Recommended By Consumer Reports?

Keep yer hair on, everyone: How many cars are we actually talking about? 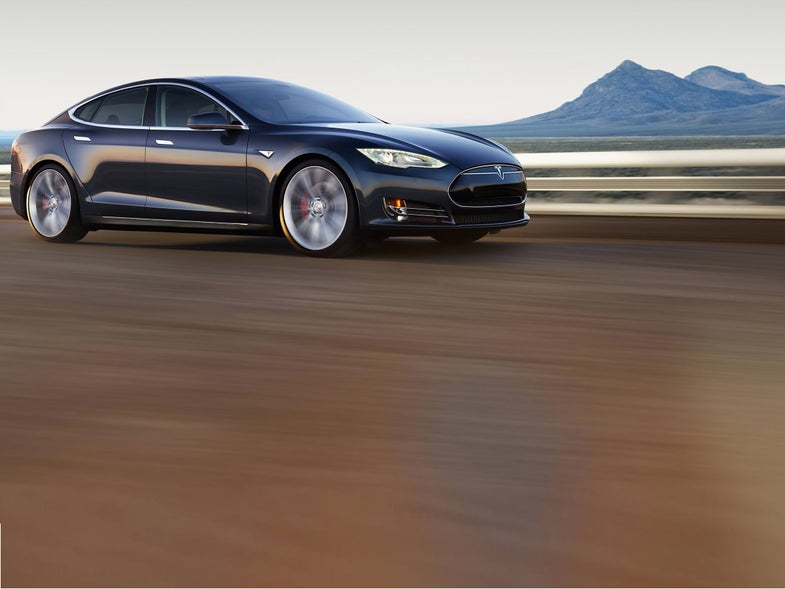 The stock price of Elon Musk’s electric car company Tesla Motors went on steep spiral today, shedding at one point 9 percent of its value based on the news that Consumer Reports—which had awarded the Tesla Model S a 103 out of 100 points in a road test just two months ago—discovered that its reliability was, perhaps, less than stellar.

As part of its annual reliability survey—in which the magazine surveys readers about their own personal vehicles—the company found there were problems with the drivetrain, power equipment like motorized door handles, the big central touchscreen, charging equipment, and various “body and sunroof squeaks, rattles, and leaks.” A blog post from the magazine notes sums up by noting that “from that data we forecast that owning that Tesla is likely to involve a worse-than-average overall problem rate. That’s a step down from last year’s ‘average’ prediction for the Model S. It also means the Model S does not receive Consumer Reports‘ recommended designation.”

The announcement goes into some specifics about what systems are proving the most problematic, but it provides no actual data. We don’t know how many owners complained about each problem, or even what percentages of vehicles showed faults. Also, there’s a laundry list of qualifiers peppered throughout the post, which notes, among other things, that all of these are covered under warranty—cheerfully covered, I might add, with a customer-service reputation that CR acknowledges is above reproach—that squeaks and rattles are more pronounced in cars as already quiet as the Tesla is, and that 97 percent of consumers would still buy another car from the company. Furthermore, the post acknowledges that Tesla is still a very young company, and that other cars from profoundly more experienced car manufacturers fared equally—or worse—than Tesla. BMW’s X5 SUV and the Nissan Leaf, for instance. What, Nissan and BMW aren’t perfect, either?

But the absence of actual data sticks in my craw. Personally, I’ve always been extremely skeptical of the true reliability of Consumer Reports surveys, and taken them with healthy doses of salt.

To begin with, the surveys are only of subscribers—in this case, covering 740,000 vehicles (not respondents—actual vehicles) owned by them. Right there, you have a self-selected group of probably pretty vocal consumers, albeit ones perhaps more attuned to product quality than that average buyer on the street. Then you have the fact that of those 740,000 vehicles, only 1,400 were Tesla Model S sedans. (There are more than 90,000 on the road currently.) No actual repair and warranty-claim statistics are factored in, and no industry data was collected. It’s straight-up subscriber feedback.

In previous years, when I’ve mulled the Consumer Reports‘ methodology, this has stuck out as problematic, particularly for vehicles, which the average consumer only purchases a few times in their lifetimes. Further, the rankings always involved numbers of complaints that were in the low single digits per 1,000 respondents. So when Tesla dropped from Average to Below Average in its reliability—there are five rankings total—that could simply mean a difference of 5 or 8 vehicles having a squeak or rattle, or needing a new motor. But we just don’t know, and have to take CR’s word for it.

Of course, all of these complaints are perfectly legit—but significant enough to warrant the stock market sloughing billions of dollars of a company’s value in one day? I doubt it. But the stock market being what it is, the company could be up 12 percent tomorrow, then back down six on Thursday. I’ve reached out to both Consumer Reports and Tesla to see if I can get actual numbers of survey complaints or warranty repairs in certain categories. We’ll update if any data materializes—and if we’re talking about statistically significant numbers of cars, adjusted for the general population, then yes, that’s a problem and we’ll bitch out Tesla about it along with everyone else. Meanwhile, let’s all just take a deep breath, accept the possibility that this may indeed be a tempest in a teapot, and not lose our collective shit every three days over this company.