Racing the Nissan GT-R: In Any Other Car, You’d Be Dead Now

This is the first post by PopSci’s_ new Contributing Editor and automotive blogger, Mike Spinelli. An automotive-focused writer, blogger, and Sirius radio host, Mike left a career in technology market research to become founding editor of New York-based automotive website Jalopnik.com in 2004. Check back each day for his blog posts on PopSci.com, and watch for his byline in the magazine as well. —Eds._

“Get on the brakes right here,” says the voice in my head. “Move to the inside and let the car drift outward to the right. Then cut in hard and it’ll set you up for this next tight bit. Now get right on the speed again.” The voice was that of New Zealander Steve Millen, veteran race driver and instructor of journalists gathered to sample the 2009 Nissan GT-R. Earlier, with Millen at the wheel, we’d shot through the same section of Nevada’s Reno-Fernley raceway — a 200-degree banked left called the Horse Shoe followed by a quick right that opens into a nearly straight run — while he narrated the action as casually as if over a pot of Earl Grey. Now I was doing it solo and, I might add, astonishingly well.

Truth is, I was outperforming my talent by a considerable margin. Notwithstanding Millen’s supernatural ability to instruct at full speed, I owed a thank you to an unsung cadre of Nissan engineers. Had I been pushing as hard in one of the GT-R’s competitors, say the Chevrolet Corvette Z06 or Porsche 911 Turbo, chances are I’d have finished the day picking sand and scrub grass from between my teeth.

That’s not to say the Chevy and Porsche are lesser cars. It’s that the level of skill required for an inexperienced racer to unlock their respective brilliance on the track is undoubtedly greater than the GT-R’s. The GT-R is Nissan’s idea of an everyday supercar, friendly enough to flog safely right off the shelf, and if our experience is an indication, a viable training tool. Not since the Mitsubishi Lancer Evo have we tested a car whose electronic control systems were so biased toward shortening lap times instead of merely assuring safety during a downpour. In that regard, the GT-R may be the ultimate expression of the Evo’s philosophy of better racing through technology. The more time I spent trying to get at the GT-R’s limits, the more it pushed me to continue searching. That’s the kind of confidence it inspires.

Ding! The GT-R’s traction control and automatic all-wheel-drive systems kick in as the rear wheels start to skid outward. With skill, I could have used such oversteer to rotate the car into position through the tight right-hander that followed. But even with the angel controls switched to “race” mode, the computer takes no chances with my abilities. “Maybe next time, champ,” it seems to say as it buttons up my power slide with a seamless torque shift to the front wheels. After a few practice laps, I’ve been able to enter those turns faster than I’d normally dare, and get on the gas quicker to exit with speed. I found myself pushing harder, braking later, going into turns hotter and making it through without spinning out. It’s a good start – like learning the trapeze over a net the size of Connecticut.

Continue reading the article below. Also be sure to see our photo gallery of the test drive here.

By any measure the GT-R is a technical masterwork. It combines a 480-horsepower, 3.8-liter, twin-turbo V6 engine with a blank-slate chassis engineered for maximum balance and stability, underpinning a stout, ultramodern body shape that registers a drag coefficient of 0.27. That’s just slightly more draggy than a Toyota Prius. Add to the mix a responsive semi-automatic transmission and generous supply of electronic driver-assistance controls. Pro-level drivers can, of course, switch these aids off, as Millen had, with no liability to the car’s competitive performance.

If Sony’s Gran Turismo series taught a generation of video gamers how to determine an optimum racing line – or the shortest path through a curve – the Nissan GT-R is the next step to becoming a true track rat. The GT-R’s composure and assistance systems let newbies channel more of the car’s power without losing control. All you really have to do is learn a track’s racing line, look for the braking zones, and go forth. It even has a customizable video console – designed by Turismo developer Polyphony Studios – that not only displays such mechanical minutiae as gear-shift efficiency, transmission oil temperature and turbo boost level, but also offers racing aids like lap timing, lateral g-force calculations, throttle and brake positioning and even driver’s notes and waypoint marking for rallying [see our article from the March 2008 issue for more]. 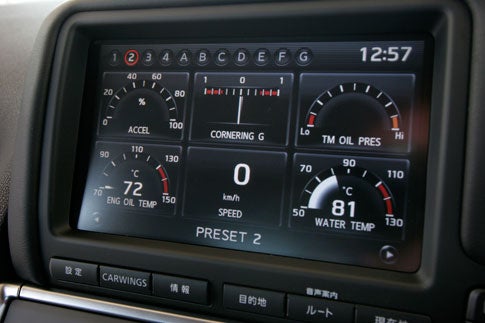 Racing drivers have a zen-like saying: Go slow to go fast. It has to do with moderating inputs from hands and feet to be smooth and controlled. But it may as well apply to the GT-R’s brakes. Imagine the feeling of pulling a ripcord during a freefall from 10,000 feet and you get the idea. The Brembo-sourced chompers – with six-piston calipers in the rear and four-piston units in the front over 15″ rotors – are made for apocalypse prevention. Millen advises me to brake as late and as hard as I dare, and the Brembos comply, without fade, even after being pounded on all day long.

You can also leave the flamboyant racing shoes at home. A dual-clutch six-speed transmission with paddle shifters makes finding the proper gear as effortless as it is pushing buttons in PS2. In race mode, it’s only 0.2 seconds between when a driver selects a gear with the steering wheel mounted paddle shifters (or auto stick), and when power reaches the wheels. That frees a noob from learning tricky heel-and-toe shifting to keep the engine’s revs in the power zone during turns. Even still, it behooves any driver to learn the manual way, considering paddle shifters bestow zero bragging rights in the clubhouse. The transmission, clutch and transfer case are also set at the rear of the car to improve weight distribution and balance.

Underneath, the ground control systems are equally impressive. An adjustable suspension collects data from a range of information systems to provide the proper damping for all situations. An electronically controlled all-wheel-drive system sends 100 percent of torque to the rear wheels normally, but can transmit 50 percent to the front wheels. The torque split varies continuously based on speed, lateral and transverse acceleration, steering angle, tire slip, road surface and yaw rate. Yes, yaw – tuning on the vertical axis.

By day’s end, the GT-R seemed as fresh as when we’d started out that morning. I’d become familiar enough with the course to induce a little understeer to gain better track position on the first, uphill turn. I also was taking Millen’s advice and braking at the last second, to the detriment of my solar plexus. It was a good start. Next time, the traction control’s coming off.

See our photo gallery of the test drive here 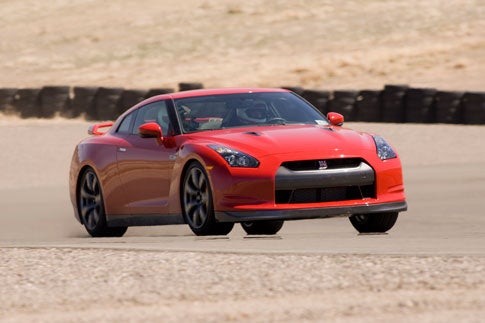 The Nissan GT-R uses all manner of onboard technology to make it the easiest-driving supercar around. 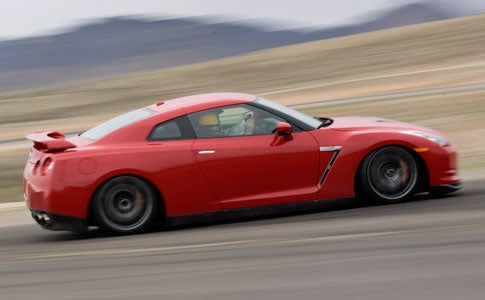 The author found himself taking corners faster in this car than he had ever dared before—just find a line and go for it. 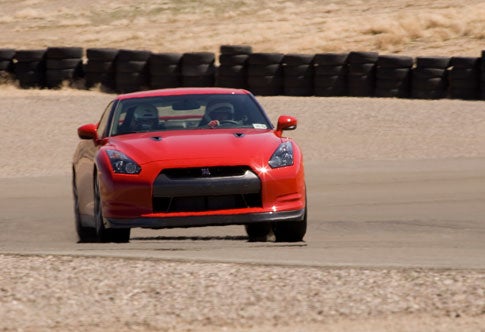 That kind of simplified racecar-driver maneuver is made possible by the Bilstein DampTronic suspension system and electronically controlled ATTESA E-TS all-wheel-drive system. 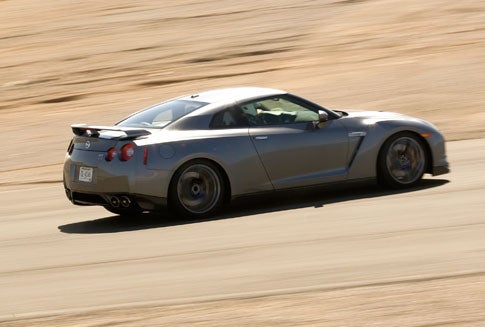 PopSci‘s verdict: By any measure, the GT-R is a technical masterwork. 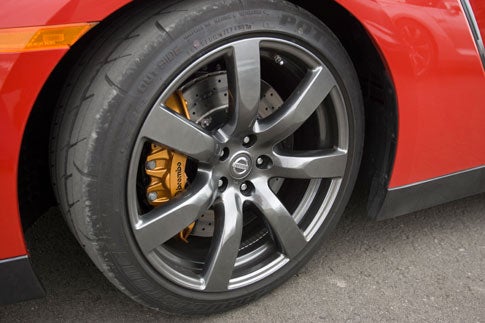 The Brembo-sourced chompers – with six-piston calipers in the rear and four-piston units in the front over 15″ rotors – are made for apocalypse prevention. 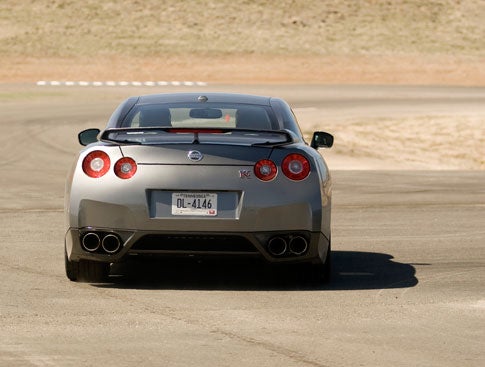 Leader of the Pack

If Sony’s Gran Turismo series taught a generation of video gamers how to determine an optimum racing line – or the shortest path through a curve – the Nissan GT-R is the next step in becoming a true track rat. 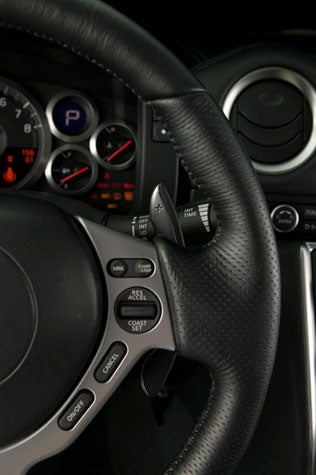 Have it Your Way

Using the Vehicle Dynamic Control, you can choose three settings—normal, comfort, and “R,” which we assume stands for “racing.” 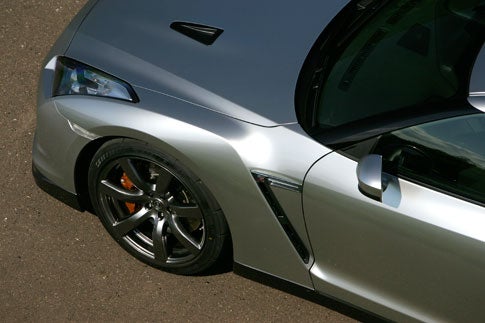 The “aero-blades” on the front fenders help reach the impressive drag coefficient of 0.27. 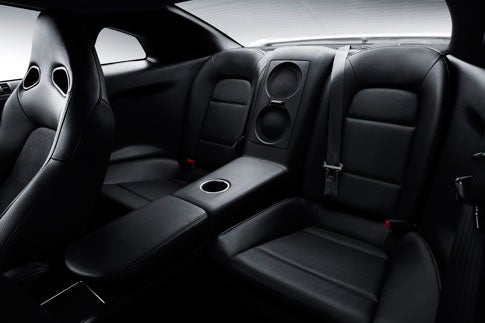 Believe it or not, this supercar is a four-seater, too. 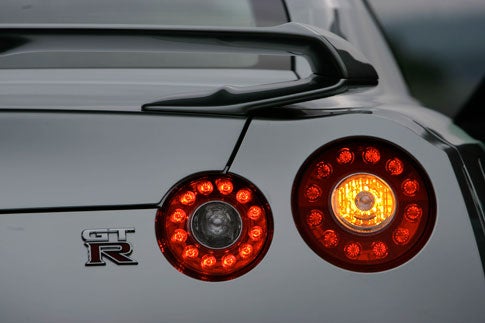