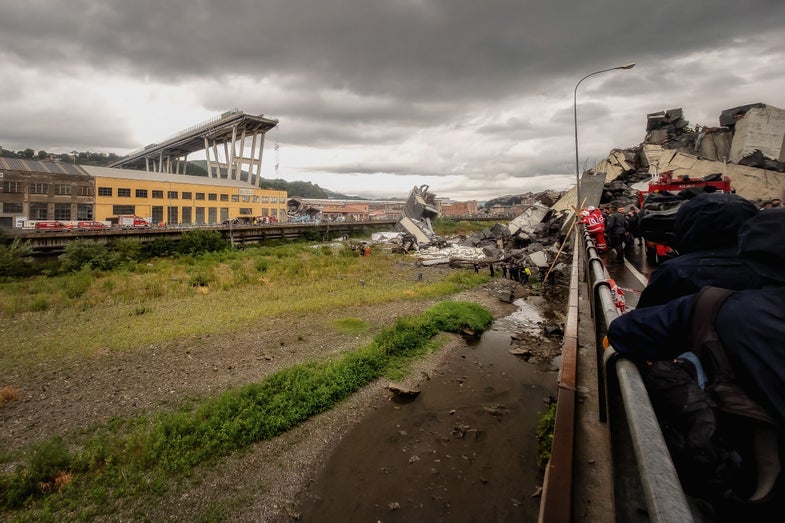 GENOA, LIGURIA - AUGUST 14: Rescuers work to search for survivors after a section of the Morandi motorway bridge collapsed earlier on August 14, 2018 in Genoa, Italy. At least 30 people were killed today when the giant motorway bridge collapsed in north-western Italy, which saw a vast stretch of the A10 freeway tumble on to railway lines. The bridge failure was the country's deadliest in years with the country's deputy transport minister warning the death toll could climb further. (Photo by Awakening/Getty Images). Emanuele Dello Strologo
SHARE

Since the 1960s the Morandi bridge in Genoa, Italy arced high over railway tracks, nearby buildings and the Polcevera river, stretching across a span of 3,615 feet (0.68 miles) carrying cars and trucks along a major toll road nearly 150 feet above the ground.

On Tuesday, a massive segment (estimated at 262-feet long) of the bridge collapsed suddenly, sending steel, concrete, cars and trucks hurtling to the ground in what Italy’s Transportation Minister called an “immense tragedy” that left dozens dead.

The bridge collapsed in the middle of a extremely wet and rainy day in Genoa. Some eyewitnesses told news agencies that they had seen lightning hit the bridge before the collapse. The exact cause is still unknown, but the New York Times reported that Deputy Transportation minister Edoardo Rixi said the bridge had shown “signs of problems” in the past.

“It is really sad. I knew that bridge, I passed across that bridge a few times. It was a famous bridge for Italian engineering,” says Matteo Pozzi, an associate professor of civil and environmental engineering at Carnegie Mellon University.

The bridge, Pozzi explains, was built by Riccardo Morandi, a civil engineer, whose designs in the 1960s were somewhat pioneering as they used reinforced concrete instead of the more expensive steel more commonly used at the time. Pozzi says that over the years people learned more about problems with the concrete of the bridge, and how it could deteriorate over time, “but it was still a landmark for Genoa.”

Italian newspaper Corriere della Sera reported another engineer had noted serious issues with the bridge in 2016, saying that sooner or later, it would need to be replaced. The paper also noted that a twin of the Genoa bridge, designed by the same engineer, partially collapsed in 1964 after being hit by an oil tanker. Reuters reported that restructuring work had taken place in 2016, and that work shoring up the bridges foundations was underway.

In the wake of large collapses like this, many researchers will start working to figure out what went wrong. In the aftermath of the Tacoma Narrows Bridge collapse in 1940, researchers investigated the relationship between wind and bridges, seeking to prevent a disaster like that from happening again. “There’s a lot of research that starts after these events,” Pozzi says. In the aftermath of the 2007 collapse of a Minnesota highway bridge, researchers figured out the potential danger caused by the deterioration of a particular steel element, leading to more vigorous inspections on other bridges. There is no guarantee that similar analysis will come out of this recent tragedy, but scientists will be looking closely into the cause.

Bridges in Italy have not fared well in recent years. The Corriere della Sera reported that not including Tuesday’s incident, 10 bridges have collapsed in Italy in the past five years, a number that the paper attributes to a lack of investment and maintence.

But problems with aging bridges are hardly unique to Italy. Here in the United States, 9.1 percent of the country’s 614,387 are considered structurally deficient, according to the American Society of Civil Engineer’s 2017 Infrastructure Report Card, which gave the state of bridges in this country a C+. The ASCE estimates that 188 million trips are made across those structurally deficient bridges every day.

Around 40 percent of all bridges in the United States are over 50 years old, putting them in the same age group as the Morandi bridge, which opened in 1967, 51 years ago.

Pozzi explains that many aspects of how a bridge behaves over its lifetime are well-known by engineers. “We understand bridge behavior very well,” he says. “The problem, in my opinion, is the uncertainty about the condition of material inside the bridge, and under the bridge.”

As a bridge ages, the steel bars inside concrete can corrode, and it’s hard to know exactly how well they’ve held up inside that concrete over decades or more—especially because climate and landscape conditions vary dramatically between locations. A bridge in a hot desert climate built across a valley will be subject to different stresses than a bridge in a cold, wet climate built over a river.

In addition to visual inspections and external sensors, engineers have made advances in the past decade in non-destructive techniques for analyzing these old bridges, including feeling out the vibrations that pass through the structure, caused by the rumble of traffic or footfalls or wind. ”By analyzing how the bridge vibrates you are able in principle to assess the stiffness of the different parts,” Pozzi says. Things like cracks in concrete, or corrosion in steel can reduce the stiffness, causing vibrations to travel differently through impacted parts of the bridge. The resolution can vary significantly by structure, but techniques like that can at least give engineers a peek into the health of a structure over its lifetime.

On newer structures, engineers can build sensors into the bridge, letting the object itself send updates on its different elements as it ages. “We have this hope that with new technology these sensors are becoming cheaper, and we can distribute more sensors, so that we can map in real time the conditions of these bridges,” Pozzi says.

Bridges are an integral part of infrastructure in any country, carrying people and cargo quickly across what would otherwise be treacherous terrain. They span rivers, valleys, and loop over other major roads and impassable areas of cities. Any collapse of a bridge isn’t just dangerous in the short term: it also severs a vein, cutting off the flow of goods and services into an area.

“You can’t recover a bridge fast. When it fails, the time that you need to build a replacement after a sudden failure is huge,” Pozzi says. “We have to deal with these rare and catastrophic events. As a society, the question is, in some sense, what is the level of investment we want to make to make these bridges safer?”

Maintaining these engineering marvels, and preventing tragedies like the one that happened today in Italy, costs money. The ASCE puts the price tag of the current backlog of bridge rehabilitation projects in the United States at $123 billion.

The cost of a collapsed bridge can also be staggeringly high. On occasion it can also be measured in a different, more tragic metric. As of this writing, 35 people have been reported as dead in the collapse in Italy, and officials said that the death toll is likely to grow.