Even if they're not quite ready for human patients. 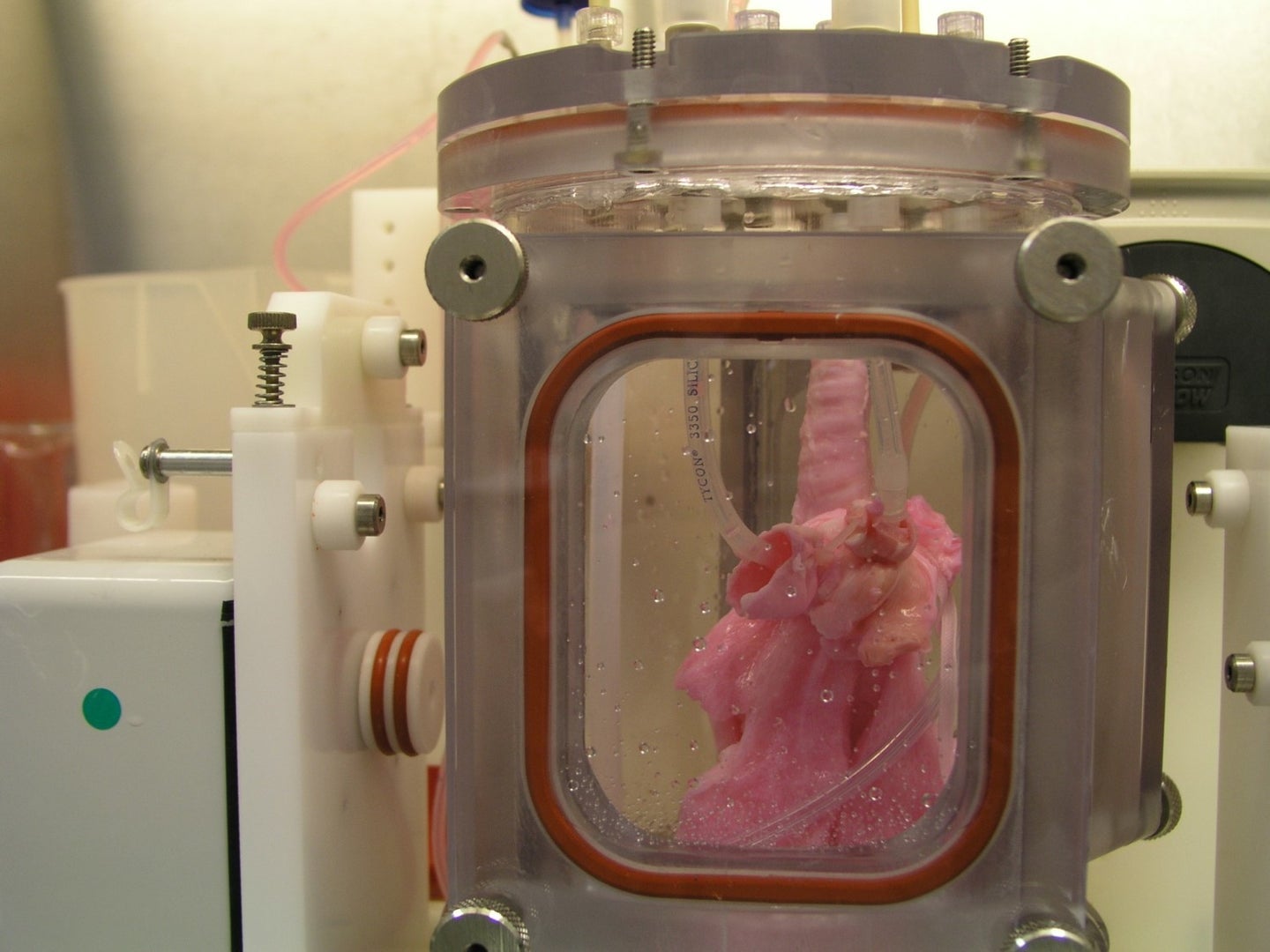 Thousands of Americans every year undergo lung transplantation in order to replace organs failing for one of dozens of reasons. But these tissues are incredibly fragile, and the five-year survival rate for a lung transplant is only around 50 to 60 percent. There just simply aren’t enough viable lung donors to ideally match the recipient’s body, and even if doctors make adjustments to the donor lung to make it more viable, there’s always the concern that the patient’s immune system will reject the new organ. Immunosuppressants lower that possibility, but also put the patient at a higher risk for contracting a serious infection. As a result, many people die on the waitlist—or soon after transplantation from complications.

A bioengineered lung would be a terrific solution to many of these obstacles. The advent of modern medicine has made it possible for doctors to essentially build a human lung in the lab from scratch—a monumental feat Joan Nichols and her colleagues at the University of Texas Medical Branch accomplished in 2014. Years later, they now present the results of another round of trials that illustrate the successful transplantation of single lab-grown lungs into pigs, without the need for immunosuppressants, ultimately pushing the prospect of bioengineered lung transplants closer to reality.

“Up until now, there have been a few studies in small animals but there was a short survival period,” says Nichols, the lead author of the new study, published Wednesday in Science Translational Medicine. “This is the first time a whole bioengineered lung has been transplanted.”

The role of pigs in future organ transplantation is nothing new: they’re large animals with a fair amount of similarity to humans when it comes to organ size, and they’re pretty easy to find and raise. But pig organs aren’t human organs, and even with new tools like gene editing, there are still big risks in trying to get our bodies to get along with these new sorts of guests. But a bioengineered lung made from the recipient’s own cells should be a more perfect match when its transplanted back into the pig than a whole lung acquired separately.

Although building a lung from scratch is a meticulous task, the overall process is not too difficult to understand. In fact, it’s sort of similar to the way you might go about building anything. You need to start out by making a scaffold—a framework of tough, flexible proteins (collagen and elastin) that the organ’s cells and blood vessels can grow on top of. In this case, researchers made that scaffold by harvesting dead pig organs and drenching them in a mess of sugar and detergent that leaves “the skeleton” of the lung behind.

Next, the team goes to the recipient pig for the trial and removes a single lung to use as the cell source for the bioengineered lung. After treating the scaffold with growth factor-filled hydrogels and nanoparticles, they add the lung cells, initiate blood vessel development, and allow the whole thing to grow in a bioreactor for 30 days.

Nichols and her team observed that when the bioengineered lungs went into their respective pigs, they developed viable blood vessel connection to the rest of the animal’s vascular system. The lungs continued to grow and develop normally in each animal’s body. The really extraordinary part of the new findings were the successful development and maturation of the microvasculature of the lung—the place where the complex exchange of oxygen to the bloodstream takes place.

The team successfully transplanted four pig lungs into four pig recipients, which were kept alive for 10 hours, two weeks, one month, and two months after surgery. The researchers needed to harvest the bioengineered lungs for closer study of how well they had developed in the body, so it’s entirely possible the pigs could have lived in healthy states well beyond just two months.

There’s no question the new results are to be applauded, but no one, least of all the research team, is getting too far ahead of themselves. Nichols calls the latest trials “a small preclinical project,” and emphasizes that “what we make is okay, but it will not support production of lungs for the clinic. We need better equipment that really meets the needs of the project,” in addition to more funding. Tests on other animal models before humans might also bolster the findings as well.

Asked if this work could really lead to lab-grown human lungs for human patients, Nichols was confident that, if future testing panned out and the team was able to find enough funding for their work, they could run clinical trials in the next five to eight years.

Still, they might need to take a breather (pardon the pun). “This project has taken 15 years to get to this point and we are thrilled that we did so well,” says Nichols, adding, “we are pretty tired now though.”