A shrunken speedster revs up 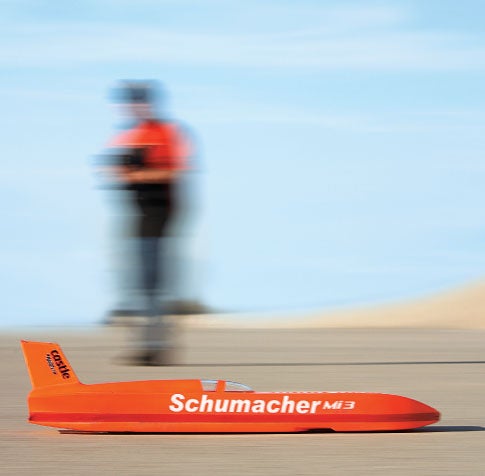 The 46-year-old eked out extra mph any way he could, including adding an 11-horsepower R/C motor and a 12-cell battery pack normally used in hobby airplanes. He made sure his handcrafted carbon-fiber chassis would generate enough aerodynamic downforce to keep the vehicle on the track, and he designed an all-wheel-drive system to further increase traction. He also used a high-frequency receiver to ensure that he never loses control of the car. 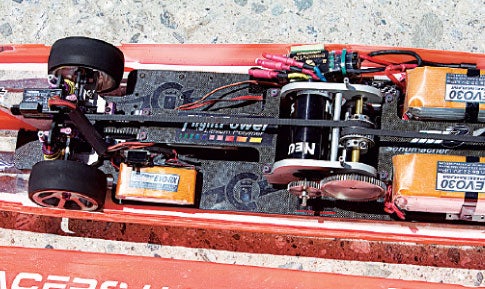 Time: 6 months
Cost: $4,000
Handling: The car has no brakes, so Case dials back the power to the motors to decelerate. To prevent flipping, he added a gyroscope-based steering-correction system normally used in remote-control helicopters.
Tires: Case designed oversized tires to improve the airflow beneath the vehicle. Instead of relying on glue, he had the rubber vulcanized to the aluminum rims, “It’s one less thing to fail,” he says.

On the next page, three more high-speed R/C racers 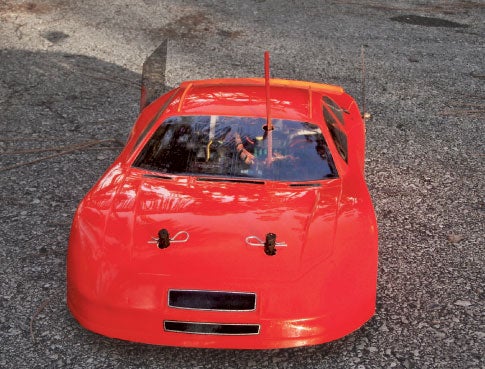 Traxxas 4-Tec
Rather than start from scratch, Jack Cecil decided to rebuild an off-the-shelf R/C car. He upgraded the batteries on a one-tenth-scale racecar and fitted it with foam tires. After changing the angle at which the body sits on the chassis, lowering the rear to reduce drag, Cecil tightened the suspension. He also adjusted the angle of the front tires, which increased speed but hindered stability, so he added fins at the rear to keep it steady. The result: He’s squeezed 111 mph out of a car designed to do half that.

X5
Nick Maslowski’s background in aerospace engineering is apparent in his flagship car. In the back, tail fins reminiscent of a jet’s vertical stabilizers prevent fishtailing. He gave the car front-wheel drive for better control, but there was too little aerodynamic downforce at the front. Above 80 mph, the nose would lift and the tires would blow out. After tweaking the translucent plastic body to boost downforce, Maslowski hopes his tires will hold up past the vaunted 100mph mark. “I’m right there,”he says. “The car’s got enough power.” 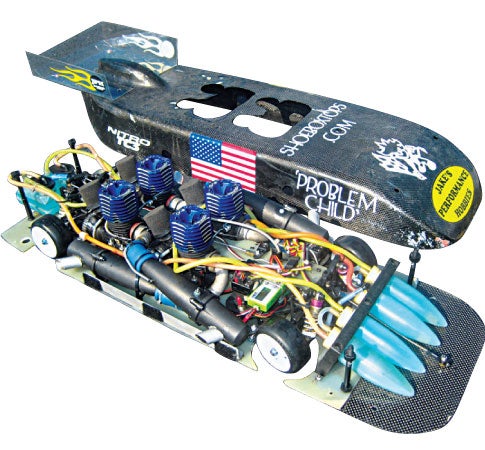 Problem Child
Gary O’Connor’s gas-burner has four engines that drive two transmissions and turn a single center shaft. To create the body, O’Connor taught himself how to vacuum-form carbon fiber by watching instructional YouTube videos. The result is not perfect, he says, but it’s lightweight and strong, and it helped the car surpass 93 mph.